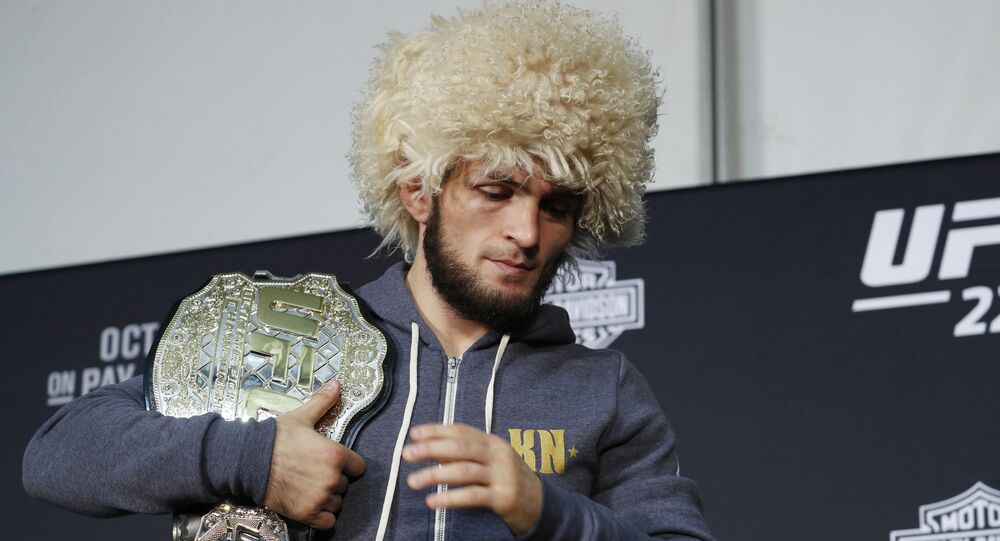 Khabib Nurmagomedov, a Russian MMA fighter who identifies himself with the Dagestani culture, believes that the vast majority of people living in Russia are perceived abroad as one nation and that they should not be divided along ethnic lines.

Khabib — a native of the Caucasian federal subject of Dagestan — sometimes dons a recognizable Caucasian sheepskin headwear, the papakha, post-fight and at press conferences. The fighter hit back at a reporter when asked why he does not enter the octagon with a Russian flag.

"I always do", he told the Russian news agency Ura.ru, explaining that the flag of Russia is displayed on the screens above the cage. "Everyone in America — those who don't know about Dagestan, Chechnya, and the Caucasus — calls me Russian."

"So, we are one nation for them", he added. "Most importantly, our people (Russians) should not divide [the nation into groups]. The ones like you, for example. And do not ask me such silly questions".

Khabib also commented on the rumours that he would next face UFC fighter Tony Ferguson, pointing out that he has been suspended after a post-fight melee with Conor McGregor's camp and will learn his fate at a disciplinary hearing on 29 January.

The brawl broke out seconds after Khabib tapped out Conor at their UFC 229 event on October 6. The Russian grappler hopped over the fence and leapt into the crowd to target Conor's cornerman, who was allegedly insulting Khabib.