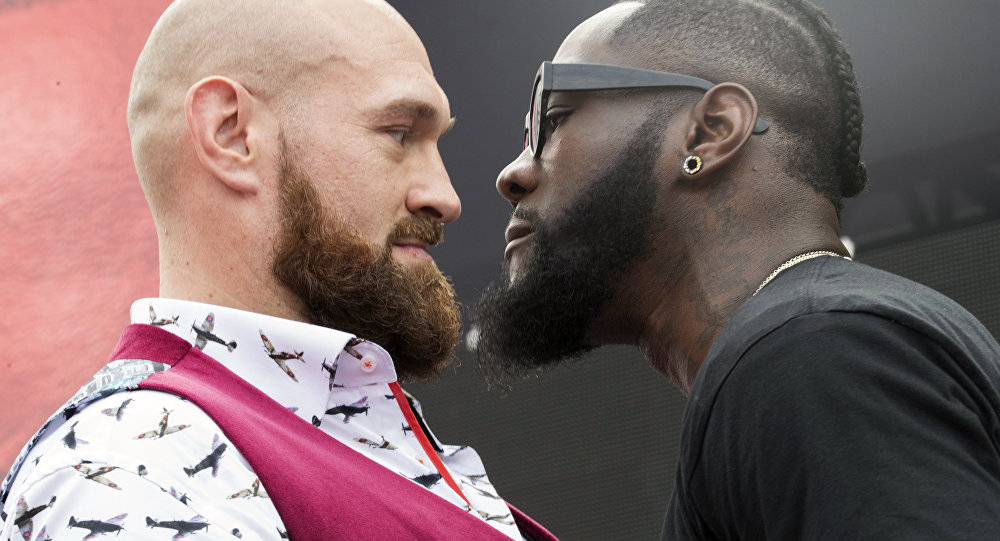 British heavyweight boxer Tyson Fury takes on the American champion Deontay Wilder in Los Angeles at the weekend. Sputnik looks at the "Gypsy King" and his history of making offensive and outrageous remarks.

Fury, 30, is trying to become a world champion for the second time, after taking time out of the ring to overcome mental health issues.

On Saturday, December 1, he will climb into the ring at the Staples Center in Los Angeles to take on WBC champ Wilder, 33, who an unblemished record in 40 fights, all but one of which he won by knockout.

Fury claimed the IBF, WBA and WBO titles from Wladimir Klitschko in a huge upset in Germany in 2015.

Year ago today was moving about with tyson, he was 26 stone plus telling me he was coming back, next Saturday he fights for the wbc heavyweight title, he's some man pic.twitter.com/cfT7BF9ZZ1

Those belts are now held by Anthony Joshua, who will not be at ringside on Saturday but is expected to meet the winner some time in 2019.

Over the years Fury has both amused and outraged with his comments. Here are some of his best and worst.

"I think they're very nice when they're walking around that ring, holding them cards. I like them actually. They give me inspiration when I'm tired. I'm all for it. I'm not sexist. I believe a woman's best place is in the kitchen and on her back. That's my personal belief. Making me a good cup of tea, that's what I believe."

"That is our way. Just like the Muslims have their ways. We (the traveller community) have our ways. There are these girls who want to open their legs to every Tom, Dick and Harry. But they are looked upon as rubbish in our community. We don't do stuff like that. If I had a sister who did that… I'd hang her. She would bring disgrace on the family. It is a very, very bad thing to do. We don't do that. Women have to be pure and respectful."

"I believe all woman look good in dresses; is that a crime?"

"She's good, she's won quite a few medals. She slaps up well, looks quite fit in a dress," he said of former British Olympic athlete Jessica Ennis-Hill.

"There are only three things that need to be accomplished before the devil comes home. One of them is homosexuality being legal in countries, one of them is abortion and the other one's paedophile. Who would have thought in the ‘50s and ‘60s that those first two would be legalised? When I say paedophiles can be made legal, that sounds like crazy talk doesn't it? But back in the ‘50s and ‘60s for those first two to be made legal would have been looked on as a crazy man again."

"Let's not try and make me out to be some evil person and I hate gays because I don't hate anybody."

"The world has gone mad, there is no morals, there is no loyalty, there is no nothing. Everyone just do what you can, listen to the government follow everybody like sheep, be brainwashed by all the Zionist, Jewish people who own all the banks, all the papers, all the TV stations. Be brainwashed by them all. I'm probably going to get in a lot of trouble for this interview for talking sense and the truth, but there's a lot of balls-less men, balls-less people out there that haven't got the bollocks to stand up and say something about it," he said in a rant in May 2016, five months before admitting he was struggling with his mental health.

"The 50,000 w***ers who signed that petition can all suck my b***s," he said after coming fourth out of 10 in a poll for BBC Sports Personality of the Year in 2015, despite a petition (eventually signed by 130,000 people) calling for him to be removed from the list of nominees.

"When I was a kid, we didn't have a family life. My mother and father were always shouting and screaming and hitting each other. My dad had different women and different kids down the road. My mum had 14 pregnancies — but only four of us survived."

On Being a Gypsy

"I am fighting royalty. I have gypsy kings on both sides of the family."

"In our culture it is all about the men, the men can do everything, and women just clean and cook and have children and look after that man."

"Watching two men jib and jab for 12 rounds is not entertaining for me. I want action, knockouts, big shots, and people getting up off the canvas. That's my ideal fight."

On God and the Bible

"Goliath was a champion, a monster who had never been beaten, and then this young guy, David, came forward, a child who believed in God and did it."

"Every time I stray away from the Lord's word, I find emptiness and darkness."

"I'm not even scared of the devil. If the devil confronted me, I'd confront him as well."

"In England, we have pints of beer. It's like a big thing and I used to drink 20 of them like four or five times a week. This belly was out here, this back was out here. I had wings on me. I'm disfigured for life. I've got stretch marks all over my body," he told Showtime television last year.

"Looking back on last year I've come such a long way back, it's been the hardest fight I've ever had battling mental health & losing 8 stones or 122lb to be back healthy & fit is the best feeling ever," Fury said on Instagram in June 2018.

On His Mental Health

"Anxiety started to come heavily, I always suffered with depression, when i was on top of the world I became more and more and more depressed until it was like suicidal thoughts and stuff like that. I had everything — money, fame glory, good looks. I had it all, everything a man would ever want but yet it didn't mean anything, I wanted to die on a daily basis."

"I wouldn't wish it on my worst enemy, mental health has to be the biggest enemy I've ever, ever, ever fought with. More than any opponent."

"You can take a man out of Ireland, but you can't take the Irishness out of the man," said Fury, who grew up in an Irish traveller community in Manchester and has a British passport.

"I want to be Irish but Ireland doesn't seem to want me," Fury said in 2011, as he struggled to find the documents necessary to prove his ancestry and gain an Irish passport.