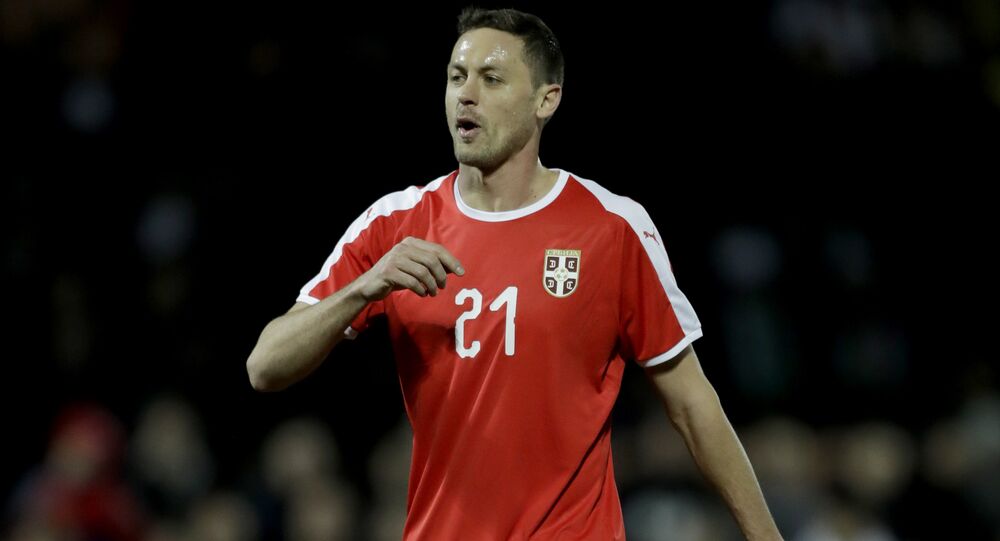 This weekend, Serbian soccer player Nemanja Matic from Manchester United, and James McClean from Stoke City Football Club refused to wear a red poppy to commemorate Remembrance Sunday when the UK marks "the contribution of British and Commonwealth military and civilian servicemen and women in the two World Wars and later conflicts."

Remembrance Sunday is commemorated by the United Kingdom and the Commonwealth of Nations. It was first dedicated to the British soldiers who served in the First World War on the anniversary of the armistice; but now it commemorates the contribution of both the military and civilians during both world wars and subsequent conflicts. On the second Sunday of every November, people from the UK and other NATO countries wear a symbolic poppy on their clothes.

© Sputnik / Alexey Filippov
UK Minister of State: Some Football Clubs Probed Over Money Laundering
On November 3, before the match between Manchester United and Bornmut, a Serbian midfielder refused to wear a red poppy on his T-shirt. On November 5, he explained his move via Instagram. Matic said that his homeland "was devastated by the bombing of Serbia in 1999," in which the UK played a key role. The soccer player added that he respects the right of people to wear poppies, but he himself wouldn't do so, although he has in the past.

The incident has caused quite a stir, both in the media and on social networks. Some even suggested that Matic should leave Britain.

Regarding Matic's statement, Dusan ‘Dule' Savic from Crvena Zvezda football club, a legend of Yugoslavian football, said that there was no need for the media to attack the midfielder.

"Of course the killers will defend themselves. What he did was with the best intentions; he was totally conscious of the effect it would have. I think the English won't forgive him. You'll see what happens after the first match in which he doesn't perform well…"

Dusan Savic supported Nemanja Matic's move, and added that everyone should have a choice:

"His reaction is not at all surprising. He's a kid of Ub. I think it's time for someone to show self-respect and respect for the victims of their own nation. Nemanja Matic has long proved to be a person with a unique attitude, and that he is thinking with his own, not with someone else's head. So, such a reaction is quite natural for a guy from Ub."

Matic is not the only footballer who refused to wear a poppy last weekend. James McClean, a Catholic Irishman, has drawn even more media attention than the Serbian. McClean was born in Derry in Northern Ireland, where in 1972  British troops shot 28 unarmed people during a peaceful protest, including minors; 13 were killed outright, while another man died several months later from the injuries he sustained. This event is now known as "Bloody Sunday."