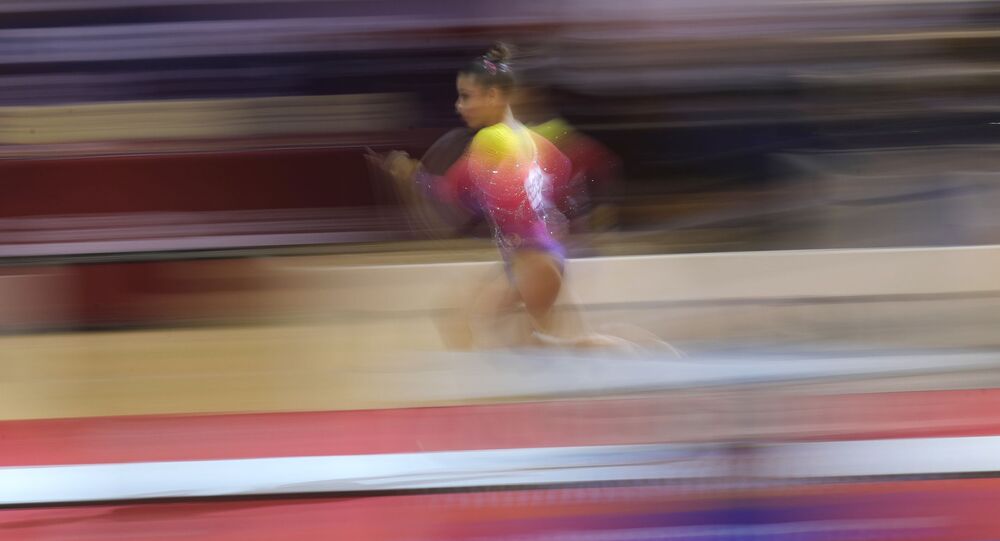 Wheel of Fortune: USAG to Lose Status as Nat'l Body After RUSADA's Return

In a twist of events, The US Olympic Committee had revoked USA Gymnastics' (USAG) status as a national governing body after its handling of former team doctor Larry Nassar's sex abuse scandal. The news comes after the World Anti-Doping Agency (WADA) voted to reinstate the Russian Anti-Doping Agency's (RUSADA) status in September.

"This is a situation in which there are no perfect solutions."

"Seeking to revoke recognition is not a conclusion that we have come to easily," she continued, adding that "in the short-term, we have to work to ensure that USAG gymnasts have the support necessary to excel on and off the field of play. We are building plans to do just that."

© AFP 2021 / Marc Braibant
WADA Top Officials Take Part in Anti-Doping Symposium in London (VIDEO)
Ms. Hirshland also said that for both current and future organizations, "it will be the critically important responsibility […] to lead gymnastics in the United States and build on the supportive community of athletes and clubs that can carry the sport forward for decades to come."

"We are prepared to identify and help build such an organisation."

Three separate judges slapped Nassar with up to 175 years in prison after evidence and testimonies revealed he had sexually abused hundreds of women and young adults, including female Olympic athletes.

USA Gymnastics' president and chief executive Kerry Perry resigned nine months into his tenure due to the scandal and public backlash. His replacement Steve Penny was later arrested after accusations of evidence tampering during the Nassar case surfaced, which he adamantly denies.

RUSADA and the WADA Doping Scandal

Considerable attention was placed on Russian anti-doping agency RUSADA after WADA suspended its status in November 2015 over accusations of "non-compliance" and violating the World Anti-Doping Code, despite providing zero evidence that such violations had taken place.

Following the suspension, Canadian professor Richard McLaren investigated allegations from Grigory Rodchenkov, a former RUSADA worker under investigation by Russian athletes for charges of corruption, bribery, blackmail, and misconduct, and used his testimonies in two reports published in 2016 accusing Russia of ‘state-sponsored' doping violations during the 2014 Sochi Games.

In August 2017, WADA released a detailed roadmap outlining 12 criteria for compliance in order to reinstate RUSADA. WADA officials voted to reinstate RUSADA in September this year, but warned that if RUSADA would "again be declared non-compliant under the ISCCS" if it "Russian authorities continue to refuse access and do not meet our deadlines."

The latest revelation serves as a blow to the reputation of US sports agencies responsible for the safety and well-being of athletes. While the RUSADA anti-doping agency took rigorous steps to meet international standards leading to its reinstatement, the USOC's own officials admitted that the USAG "continues to struggle to change its culture, to rebuild its leadership and to effectively serve its membership."

You deserve better," Hirshland said in her open letter to the US gymnastics community.