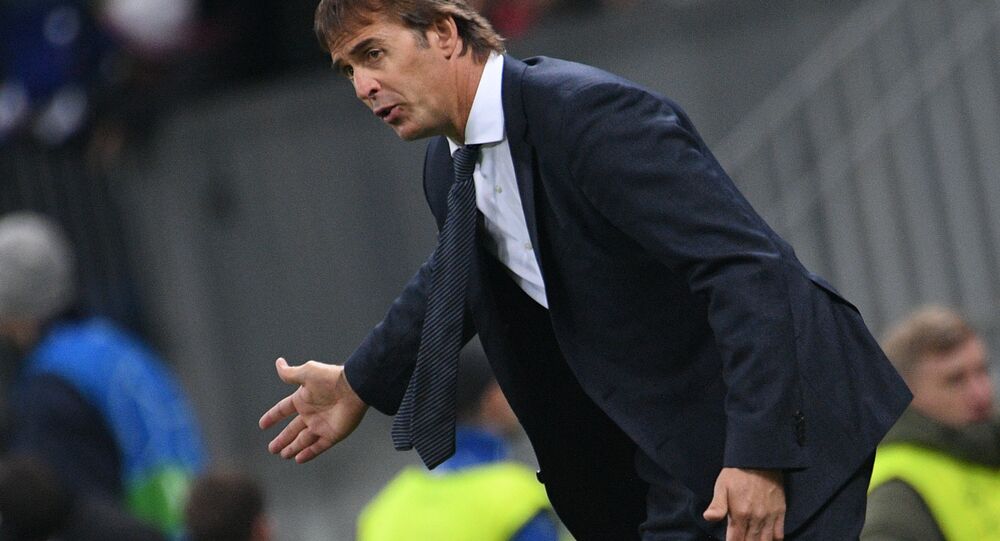 Earlier, pundits reported that the Real Madrid manager would be fired if his side lost to Barcelona over the weekend in the season’s first El Clasico.

Real Madrid’s board have sacked Julen Lopetegui as club manager, announcing that he will be “provisionally replaced” by Santiago Solari while they mull over their options.

In a statement on Monday, the club said, “there is a great disproportion between the quality of the staff of Real Madrid and the results obtained to date.”

READ MORE: No Messi, No Problem: Barcelona Triumph Over Inter Despite Talisman’s Injury

© Sputnik / Alexander Vilf
'Magnificent' Performance: CSKA Moscow Triumph Over Real Madrid in Shock UCL Result
Meanwhile, in the UEFA Champions League, the reigning champions currently top their group, despite suffering a shocking defeat to CSKA Moscow. However, Roma and CSKA are within reach of Los Blancos, and could potentially knock Real out in the group stage.

Real’s embarrassing 5-1 defeat against Barcelona over the weekend was seemingly the final nail in Lopetegui’s coffin, ending his brief spell at the club.

This is Lopetegui’s second sacking in a matter of months, with the Spanish national team relieving him of his position just two days before the 2018 FIFA World Cup, after he angered the Spanish football federation by signing a three-year deal with Real, replacing outgoing coach Zinedine Zidane.

Football fans have reacted to the news of his departure from the Bernabeu, mocking him for being fired again.

He deserves this. He betrayed with Spain international football team.

Thia year he got fired twice 😂😂

It was long overdue

Not a bad record for a mid table team imo😂😂

It’s unclear who will replace Lopetegui, with ex-Chelsea manager Antonio Conte and others being tipped as potential replacements.

However, Belgian star Eden Hazard, who is set to move to Real in the upcoming winter transfer window, has reportedly told the board not to hire Conte.