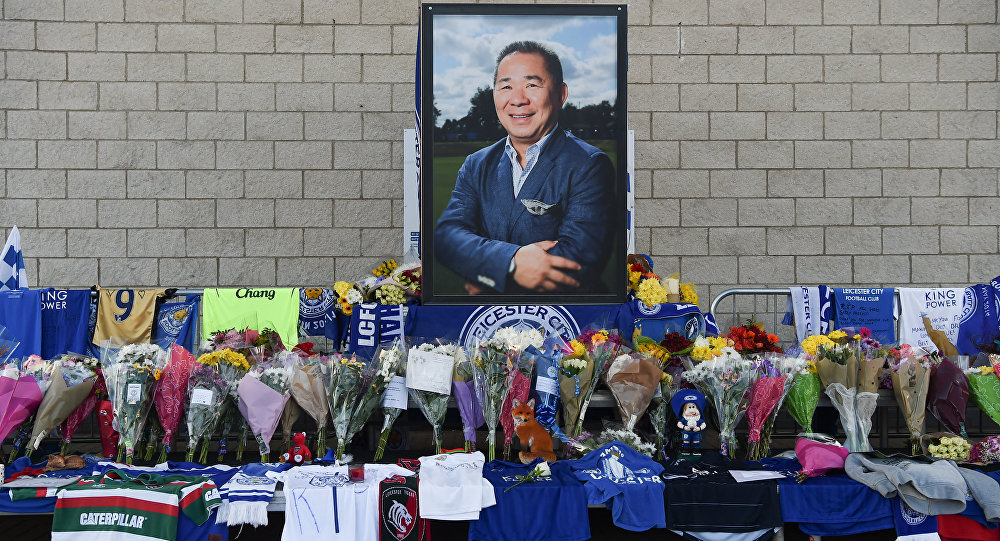 Thai billionaire Vichai Srivaddhanaprabha, who died this weekend in a tragic helicopter crash, had seemingly forged a deep bond with the fans, with touching tributes pouring in on social media.

Vichai Srivaddhanaprabha, the 60-year-old Thai retail tycoon who owned and chaired the Leicester City football club, was killed in a helicopter crash on Saturday evening outside his club's home stadium.

The helicopter came down near the King Power Stadium around 8:30 p.m. (21:30 GMT) shortly after a match between Leicester City and the West Ham United.

Leicestershire police reported that another four people had died in the crash, including two members of his staff, the pilot and an unnamed passenger.

It was only on Sunday that the billionaire's death was confirmed; the club issued an online statement, praising Srivaddhanaprabha as "a man of kindness, of generosity, and a man whose life was defined by the love he devoted to his family and those he so successfully led."

The statement was followed by similar emotional tributes from a handful of fellow British clubs and foreign teams.

We're thinking of you, @LCFC ❤

Our deepest condolences are with the loved ones of those who have so tragically lost their lives, and everyone at #LCFC

Paris Saint-Germain family is shocked and saddened by the tragic events that claimed the life of Leicester City owner Vichai Srivaddhanaprabha and sends its sincere condolences to the families and friends of all the victims as well as the supporters of Leicester City.

Our thoughts are with all of you from Leicester. Stay strong at this moment that has shaken all of us from the world of football. 💙🇧🇷

RIP Vichai Srivaddhanaprabha & the other 4 people who have tragically lost their lives in the Leicester helicopter crash. He gave us all the belief that anything is possible when he guided his club to the Premier League title against all odds. He allowed us to dream. Thank you. pic.twitter.com/SQ67sfdiQq

Leicester City fans are mourning the loss of the man behind their club's miracle run to clinch an against-all-odds Premier League title win.

Leicester City and football will never forget him

R.I.P Vichai Srivaddhanaprabha. The man behind one of the greatest stories in sporting History! Live Forever ❤️#Leicester pic.twitter.com/zd905hBBfu

He did exactly what we all love in football. He turned a Impossible Dream into Reality…

Khun Vichai thank you for changing the history of my team and your team. Making dreams a reality, making a difference to thousands, for being a truly inspirational human, conducting yourself in the highest manner possible. Our club is your legacy and we shall forever be grateful

Such sad news about the Chairman of Leicester football club & the other 4 passengers on board the helicopter that fatally crashed after the game yesterday. Condolences to their families.

Vichai, who also owned the Thai duty-free retail giant King Power, bought Leicester City in 2010 when the club was in huge debt and struggling in England's second tier division. Foxes promoted to Premier League, England's top-flight league, after a 10-year absence in 2014 and won it in 2016 for the first time in their history. With bookmakers giving odds of 5,000/1 for their win ahead of the triumphant season, their road to glory has been widely praised as one of the greatest sporting stories in football.