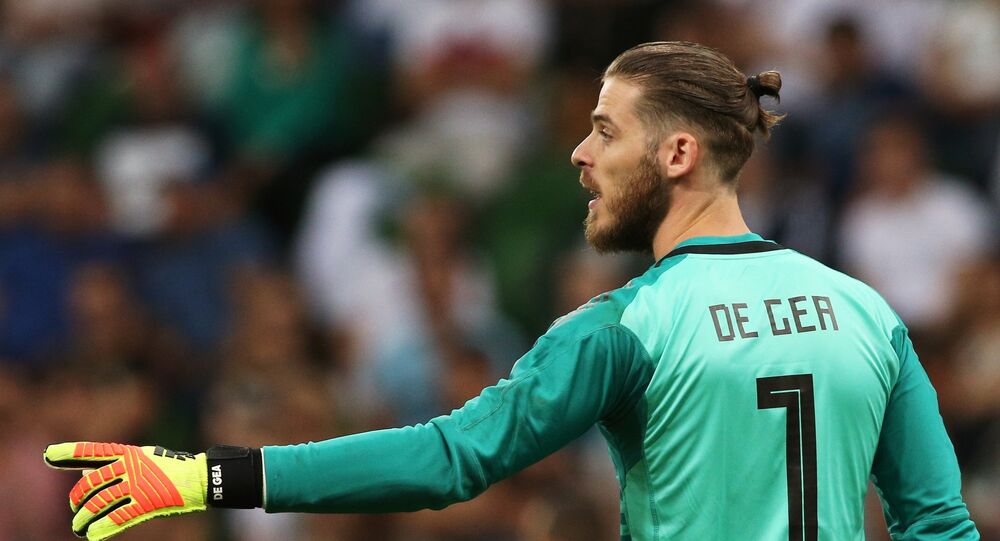 The Spanish goalkeeper made a handful of impressive saves in United’s recent match against Juventus, preventing the Serie A giants from thrashing the Red Devils at Old Trafford.

Embattled Manchester United managed Jose Mourinho is concerned about the prospect of Juventus poaching goalkeeper David De Gea on a free transfer upon his contract’s expiry, according to a club source.

Speaking to The Times on Thursday, the Man Utd source described the Turin-based side as “an expert in intelligent deals”, explaining they are prepared to wait a year or two to sign De Gea if United remain intent on keeping him.

“De Gea played against his future club on Tuesday. Juve are an expert in intelligent deals. If United don’t sell him in the summer, Juventus will wait until the end of his contract,” the source said.

© AFP 2021 / ODD ANDERSEN
Netizens Dub Marcelo's Reported Juventus Transfer Request the 'Ronaldo Effect'
Juve have successfully executed this strategy on numerous occasions, signing German midfielder Sami Khedira from Bayern Munich in 2015, Andrea Pirlo from AC Milan in 2011, and Dani Alves from Barcelona a couple of years ago, all on free transfers, saving the club tens of millions of euros.

Commenting on De Gea’s future at Man Utd and his decision to not yet sign a contract extension, Mourinho said he is “not confident” but also “not worried.”

Football fanatics have reacted to the potential high-profile move on social media, suggesting such a move would be a major blow to the Red Devils, while others insisted he deserves to play for a top team that is on form.

Would you blame him? Deserves to play for a top team

I’m a red through and through but a player of his class should be winning the important medals. If he did leave I wouldn’t hold it against the guy he deserves better.

Unless he knows there are changes afoot at United, he’d be mad to turn down Juve.

De Gea is considered to be one of the best goalkeepers of his generation, and a move to Turin would leave Juve with perhaps the strongest squad in Europe, as they already have an exceptional central defender pairing in Bonucci and Chiellini, and boast one of the best attacking lineups in the world, with Cristiano Ronaldo, Paulo Dybala, Mario Mandzukic, and pacey winger Douglas Costa.

Juventus have enjoyed an impressive start to the season, winning all of their opening Champions League games and Serie A fixtures, bar a 1-1 draw with Genoa.