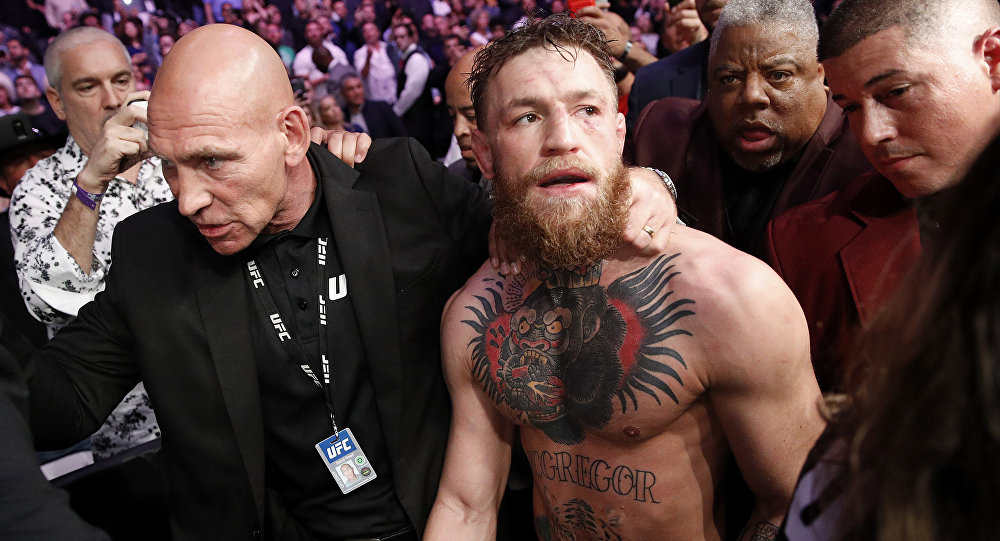 Following the victory over McGregor, Khabib Nurmagomedov jumped off the octagon and attacked the Irish fighter's coach, starting a massive melee between the two teams, including McGregor himself.

The Nevada State Athletic Commission (NSAC) has decided to prolong the initial 10-day suspension that was given to Conor McGregor and Khabib Nurmagomedov over their participation in the post-bout fight on October 6 in Las Vegas. The suspension will last until their cases have been reviewed by the commission fully, with the next hearing scheduled for December.

© AP Photo / John Locher
'Hats Off to You': Khabib Wins Praises as He Fends Off McGregor's Post-Match Speech in Just 3 Words

CNN reported, citing NSAC Chairman Anthony Marnell, that during the commission's hearing on October 24, a decision was made to release half of Khabib's prize money, which was frozen due to him starting a melee after his match against McGregor. This means that the Russian athlete will get $1 million, while the fate of the remainder of the $2 million prize depends on the commission's final decision on sanctions against Khabib.

"I have felt half was a good enough amount of money, to release a million dollars. That should cover all expenses, give the fighter some money. At the same time, it's still a very substantial amount of money to be withheld until we can get to the case in December and get all of the testimony or potentially we get a settlement agreement," Anthony Marnell said. 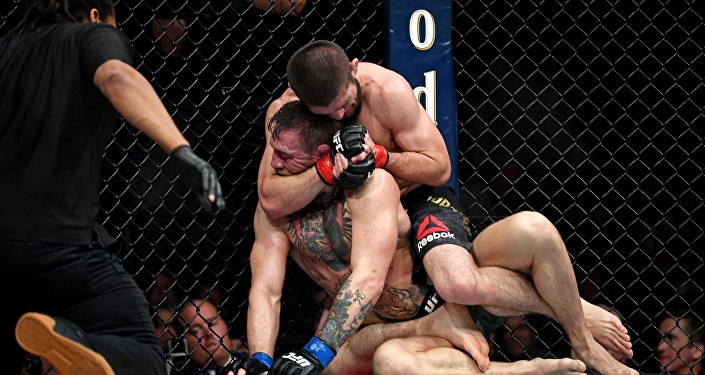 While both fighters face possible fines and further suspensions, McGregor's attorney and former UFC legal counsel, Michael Mersch, said in an interview with the website MMAjunkie that he held all cornermen who were involved in the post-bout fight responsible.

"I hope the commission will not just focus on the two fighters in this case, because I think the commission has a history of looking at the actions of corner people, as well. I don't pretend to know the names or functions of every single person that was in and out of the octagon post-fight, but I assume that at least some of them were licensed by this commission," he said.

Social media users reacted differently to the news. Some discarded the news about the extended suspension as non-essential for both fighters, as it's unlikely they will fight before 2019.

He’s not fighting until 2019 anyhow. Negligible

Others noted that it could play into McGregor's hand, since he will have time to prepare for a rematch.

Some twitterians wrote that both deserve harsh punishments, up to prison sentences, for fighting outside the octagon.

Conor McGregor and reigning lightweight UFC champion Khabib Nurmagomedov met in the octagon on October 6 in a much-anticipated fight. The Russian athlete emerged victorious in the fourth round after McGregor submitted following a successful neck-crank by Khabib. After the fight ended, Nurmagomedov rushed out of the octagon and attacked McGregor's teammate, Dillon Danis, who, according to the fighter, had been insulting him throughout the match. The Irish and Russian fighters' teammates also got involved in the post-fight melee.