'We Worked Everything Out': Khabib Staying On - UFC President

Utter mayhem erupted after the October 7 fight between the teams of the two headline UFC contenders, Conor McGregor of Ireland, and Dagestan's Khabib Nurmagomedov.

It looks like reigning Ultimate Fighting Championship (UFC) Lightweight champion Khabib Nurmagomedov will not be leaving the organization anytime soon, with UFC President Dana White having told TMZ Sports that everything has been worked out between the two sides.

“We’re good. We worked everything out. We are going to get everything worked out. Obviously [Khabib] was a little upset, a little fired up. We will get it all worked,” White said.

Khabib Nurmagomedov had earlier said he would bow out of UFC after Dana White said that Khabib’s training partner Zubaira Tukhugov, would be banned from fighting for jumping over the cage and hitting Khabib’s rival Conor McGregor. 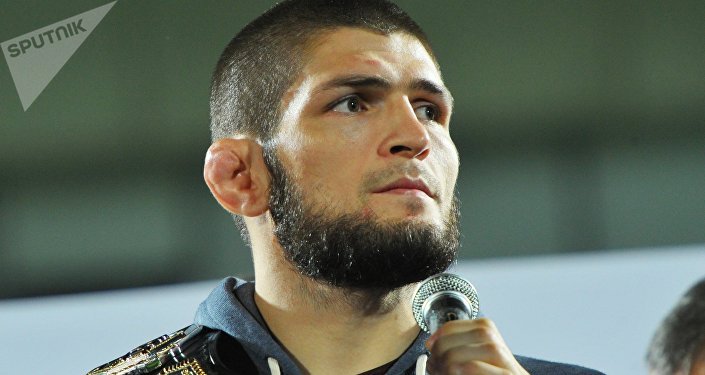 © Sputnik / Said Tsarnaev
Khabib to 50 Cent Over Manager Insult: 'Don't Badmouth My Bro!'
Even though Dana White is still angry about the post-fight brawl, he understands why Khabib’s emotions got the best of him that night.

Scenes of utter mayhem erupted in Las Vegas as the biggest mixed martial arts event in history ended in a mass brawl between the teams of the two headline contenders, Conor McGregor, of Ireland, and Dagestan's Khabib Nurmagomedov, who retained his Ultimate Fighting Championship lightweight crown by submitting his rival in the fourth round.

When McGregor was submitted in the fourth round by the victorious Nurmagomedov, the champion climbed over the cage and hurled himself at the rival team, sparking a brawl by attempting to take on one of McGregor's cornermen.

The wild scenes that erupted appeared to be a continuation of the bad blood after McGregor infamously attacked a bus carrying Nurmagomedov in New York, in April.