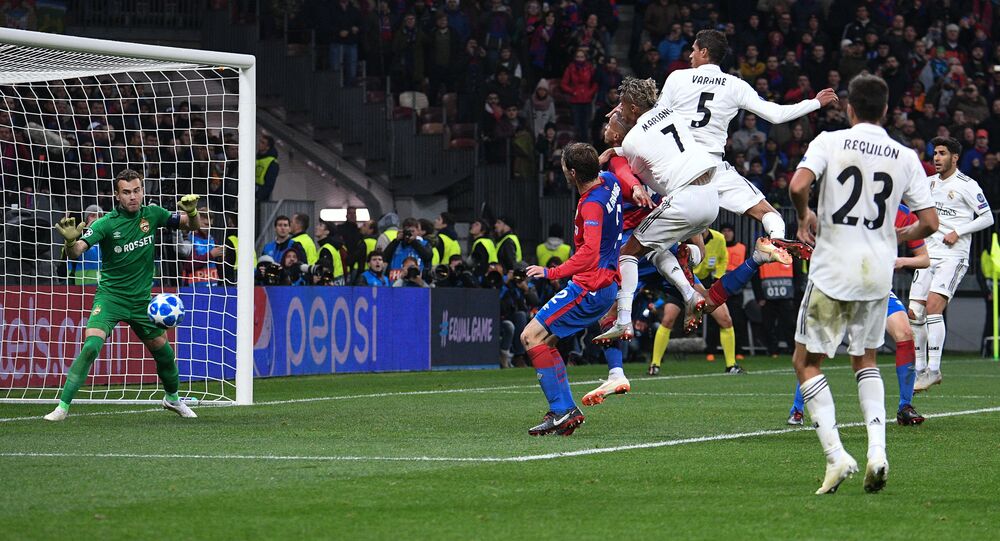 A wave of Champions League fixtures took place across Europe on Tuesday evening, with clubs looking to bag three points to boost their hopes of progressing in the prestigious and lucrative tournament.

Los Blancos looked to score an equalizer over the remainder of the match, but their depleted squad failed to find the back of the net, though they struck the frame of CSKA’s goal on three occasions and created numerous gilt-edged opportunities.

Even without Sergio Ramos, Gareth Bale and Isco, the Spanish heavyweights were expected to win, as manager Julen Lopetegui had no shortage of talent at his disposal, including new signing Mariano Diaz, who scored in their last UCL game against Roma.

After playing two of their six UCL group stages matches, CSKA Moscow top Group G with four points, having secured a draw in their opening fixture of the tournament.

© AP Photo / Antonio Calanni
Ronaldo Scores His Second Goal for Juventus Against Sassuolo
With four group stage games remaining, CSKA will feel they have a good chance of advancing in the tournament.

However, the ecstasy from Tuesday’s victory was somewhat dampened by the late sending off of goalkeeper Igor Akinfeev, with the referee dishing out two yellow cards in quick succession for “dissent.”

After the match, CSKA Moscow manager Viktor Goncharenko described his team’s performance as “magnificent”, but suggested they might struggle in their next fixture due to Akinfeev’s suspension, describing the Russian goalkeeper as “half of our whole team,”

Despite yesterday’s defeat, Real are still likely to progress through the group stage, as they currently sit second in Group G and have lifted the last three Champions League trophies, though they are now without Cristiano Ronaldo, who played a key role in their European football successes.

Real fans and the wider football community claimed the game highlights how the squad is struggling without Ronaldo, who was sold to Juventus in the pre-season transfer window, calling on other players to step up.

​Are we going to ignore the fact that Real Madrid fans were Chanting C.Ronaldo after the Madrid derby yesterday😂😂😂😂#Cr7 is a goat