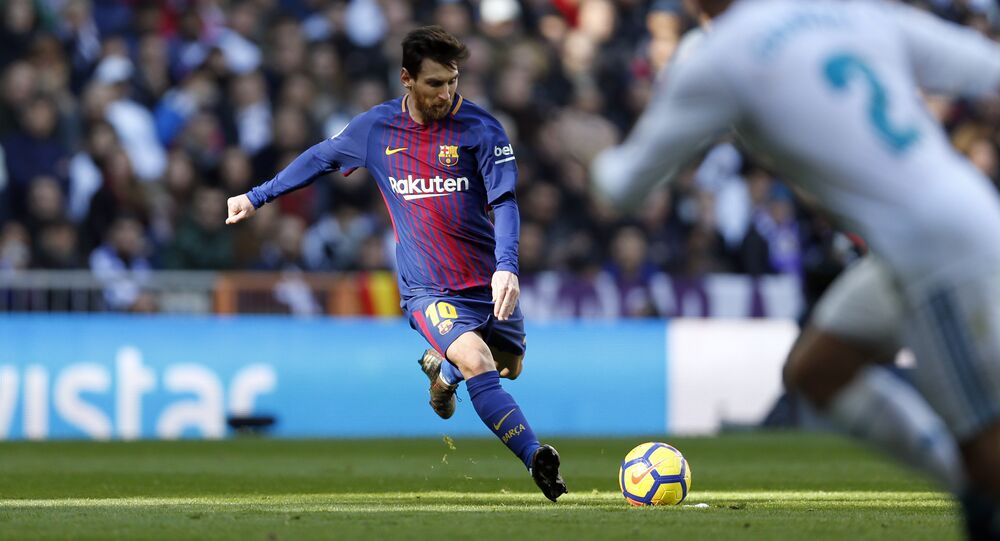 The two serial La Liga champions and bitter rivals both had a day to forget, dropping three points in the standings under different circumstances.

Barcelona played last-placed Leganes on Wednesday afternoon, and despite Brazilian midfielder Philippe Couthinho scoring a stunning early goal, the game ended with the Catalan heavyweights down 2:1, after the underdogs bagged two goals in under two minutes during the second half.

With their fixture in the evening, Barcelona's defeat gave Real Madrid an opportunity to jump to the top of the La Liga table, but Los Blancos failed to capitalize and were ultimately thrashed 3:0 away by Sevilla, with Portuguese striker Andre Silva, currently on loan from AC Milan, scoring a brace with assists from winger Jesus Navas.

© REUTERS / Dylan Martinez
'Not a Euro Less': Real Madrid Boss Puts SHOCKING Price Tag on World Cup's Best Player Modrić
Real have struggled against Sevilla in their away games in recent years, and although fans were expecting a difficult game in line with this trend, very few were expecting their team to concede so many goals and fail to find the back of the net even once.

Welsh international Gareth Bale came closest to scoring for Real Madrid, hitting the post and missing the target while opposition goalkeeper Tomáš Vaclík was out of position.

Although Real were defeated by a much bigger margin, Barça’s loss is arguably more shocking, as they lost to a small club which, prior to yesterday’s triumph, were bottom of the table and hadn’t managed a single win in the 2018/2019 season.

Unsurprisingly, yesterday’s shock results and lackluster performances triggered a wave of reaction and memes on social media, with many football fanatics using the defeats as a rare excuse to poke fun at the two La Liga giants.

“we will not miss cristiano ronaldo”
sevilla 3-0 real madrid. pic.twitter.com/3BbInPJJih

Leganes are now called Eganes because they gave the L to Barcelona.

Barcelona and Real Madrid in La Liga this season pic.twitter.com/D4r7KaHU3e

Barcelona and Real Madrid currently sit first and second in the La Liga standings, respectively, both on 13 points, having achieved four wins, one draw and one loss each, with the Catalan squad narrowly ahead of Real on goal difference.

Next up, Barça face Athletic Bilbao on Saturday while Real face Atletico Madrid in a local derby later in the day.