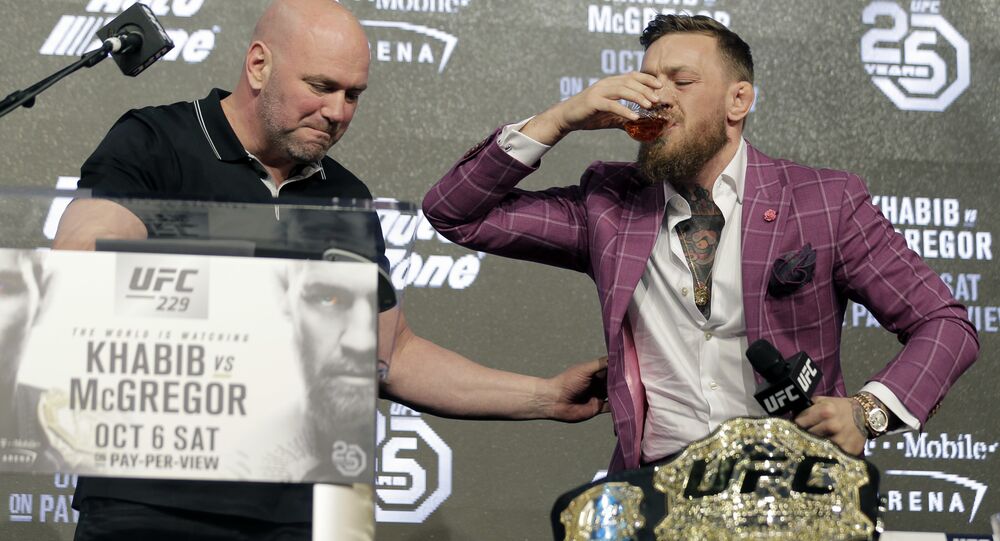 The Irishman, who is known for his brash antics, offered Khabib Nurmagomedov a glass of spirits - a provocative step, one might say, given that Khabib practices Islam, which prohibits alcohol. On top of the taunt, Conor McGregor referenced the infamous dolly-throwing April incident, which led to his arrest and guilty plea.

Irish UFC fighter Conor McCregor sneaked a bottle of his own brand ‘Proper No. 12' whiskey to an explosive press conference with Russia's Khabib Nurmagomedov. The event was held in New Yok on Thursday in the run-up to their long-awaited UFC 229 showdown which will take place next month.

"I'm not underestimating him and when I go to the cage I'm gonna go like [it is] my last fight," Khabib said before he was interrupted by his raucous challenger.

"Why don't you drink?" Conor inquired, holding out a glass of whiskey. "I don't drink," Khabib, a devout Muslim, replied repeatedly.

McGregor also claimed during the presser that it would take him one round to dispatch his rival and reclaim the UFC lightweight title.

He also referenced the infamous April incident in which he hurled a metal dolly through the window of a bus carrying Nurmagomedov and his team, shattering glass and injuring lightweight fighter Michael Chiesa. Later on, he was arrested and pleaded guilty to disorderly conduct to avoid a jail term.

McGregor is gonna get rocked

Can't wait for Khabib to dismantle him…

That conference was definitely a win for Khabib. Conor, as expected, went to the depths of bashing Khabib’s ethnicity, religion and family and still couldn’t get a reaction out of him. Conor was stuttering his words, showing how well he prepared his lines for this.

Anyone who thinks Conor is actually getting to Khabib is seriously delusional. Mcgregor threw everything at him and Khabib has remained as calm as anyone has ever been in a McGregor presser. Kinda bored of Connors trash talking tbh. Especially after the Mayweather saga.

The presser marked the first time the two fighters squared off in front of the media. Conor McGregor, a former featherweight and lightweight title holder, and Khabib Nurmagomedov, the reigning lightweight champion, are set to face off at UFC 229 in Las Vegas on October 6.