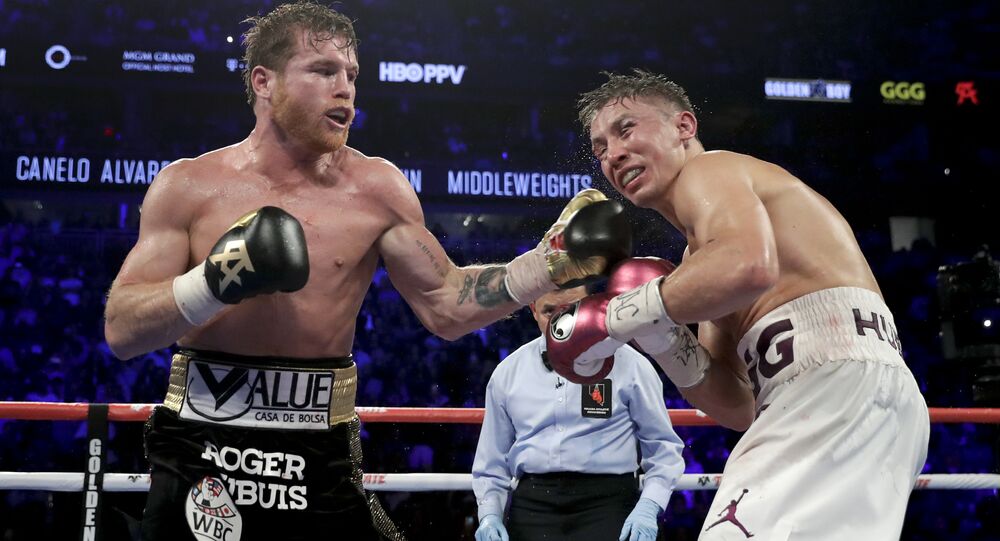 Soviet-born Gennady Golovkin lost his first fight at the weekend in a rematch with Mexico's Saul "Canelo" Alvarez but the pair are all set for a third and deciding battle next year. Sputnik looks at some of boxing's great trilogies.

Alvarez, 28, and Golovkin, 36, drew their first fight almost exactly a year earlier and the Mexican — whose nickname translates as "Cinnamon" and relates to his red hair — was able to change his style and claim both the WBA and WBC middleweight titles.

The only way to settle it is for another money-spinning bout next year.

But their rivalry has yet to reach the intensity of these ring trilogies.

As Cassius Clay, he won the world heavyweight title in 1964 and the following year he retained it against Sonny Liston, by then having become a Muslim and changed his name to Muhammad Ali.

But Ali was banned from boxing in 1967 after refusing to fight in Vietnam and his title belt ended up in the hands of "Smokin' Joe" Frazier.

When Ali was finally allowed back in the ring in 1971 Frazier handed him his first ever defeat, on points.

In January 1974 Ali defeated Frazier — who had lost his title to George Foreman and the following year — at Madison Square Garden in New York.

When Ali pulled off a major upset by knocking out Foreman in Kinshasa he set up a third fight with Frazier in the Philippines in 1975.

The so-called Thrilla in Manila was a brutal contest fought amid exhausting heat and humidity.

Both men were battered and bruised at the end of the 14th round but Ali was on top and Frazier's trainer, Eddie Futch, took the decision to pull his man out of the fight.

Ali was so exhausted he could barely get to his feet to raise his arms in victory.

Sugar Ray Robinson is considered by many boxing writers to have been the best pound-for-pound fighter of all time.

The pair fought a trilogy of fights in New York and Detroit between 1942 and 1943 — with Robinson winning two and La Motta one, all on points.

Boxers were made of sterner stuff in those days.

Three fights was not enough for these two tough men.

In 1945 they fought twice again in Chicago and New York, with the judges awarding both fights to Robinson.

In 1951 they clashed again in the Windy City and this time Robinson ended it by TKO.

At the end of the fight, in a scene made famous in director Martin Scorsese's film, La Motta (De Niro) — his bloody and swollen eyes almost closed — comes over to Robinson's corner and tells Robinson "You never got me down, Ray."

The word machismo should have been invented in Mexico and Erik Morales and Marco Antonio Barrera exhibited it in bucketloads during their trilogy of fights.

All three fights took place in Las Vegas — in 2000, 2002 and 2004 — with the bantamweight, featherweight and super featherweight titles up for grabs.

But the real prize was not a belt, or even the money, but the glory of being known as the toughest "hombre" in Mexico.

Erik "El Terrible" Morales came from the tough border town of Tijuana while Barrera, whose nickname was the "Baby Faced Assassin", was a native of the capital, Mexico City.

Barrera won two of the three fights between the pair but although Morales won the first fight, on a split decision, many felt Barrera had nicked it.

That first fight was fought with an intensity which has rarely been seen inside a ring before or since, with Rounds Five and Nine worth the admission price on their own.

While the clashes between Evander "The Real Deal" Holyfield and Riddick "Big Daddy" Bowe may have lacked the intensity and personal animosity of Morales v Barrera, they made up for it with controversy.

Holyfield — who would later lose part of his ear to "Iron Mike" Tyson — was the world heavyweight champion in 1992 when he was challenged by New Yorker Riddick Bowe.

The 24-year-old Bowe won the fight but Holyfield showed the heart of a lion — especially in the 10th round when he survived a brutal punishing and came back with plenty of his own punches.

"If Holyfield weighs 205 pounds, his heart must weigh about 204," said ringside commentator Larry Merchant during that 10th round.

Holyfield beat Bowe in the rematch at Caesars Palace in Las Vegas in 1993 but that fight was overshadowed by the infamous "Fan Man" incident, when prankster parachutist James Miller got tangled up in the ring ropes after "dropping in" on the event.

In 1995, Holyfield, who had briefly retired with a heart condition before resuming his career after a faith healer "cured" him, dropped Bowe in the sixth round of their third fight but ended up getting knocked out in the eighth round to hand over the rubber match.

The rivalry between American Emile Griffith and Bernardo "Benny The Kid" Paret got out of hand and some have argued the slurs exchanged before and during their third and final bout ultimately ended in tragedy.

In their first fight in Miami in April 1961 the Cuban was knocked out by Griffith.

Five months later Paret gained revenge, winning a split decision at Madison Square Garden, which was also the venue of their fatal third fight in March 1962.

But he was fearless and game and was determined to beat Griffith.

Bad blood had grown up between the two and Paret was fond of using homophobic slurs against Griffith — who in 1992 was attacked and beaten outside a gay bar in New York.

Although Griffith later admitted being bisexual, he was enraged by Paret calling him a "maricon (faggot)" at the weigh-in.

Griffith fought with an intensity few had seen before in him and in the 12th round he had Paret trapped in the corner and landed a series of heavy punches which led to the referee finally calling the fight over.

Paret collapsed on the ground, eventually fell into a coma and died 10 days later.