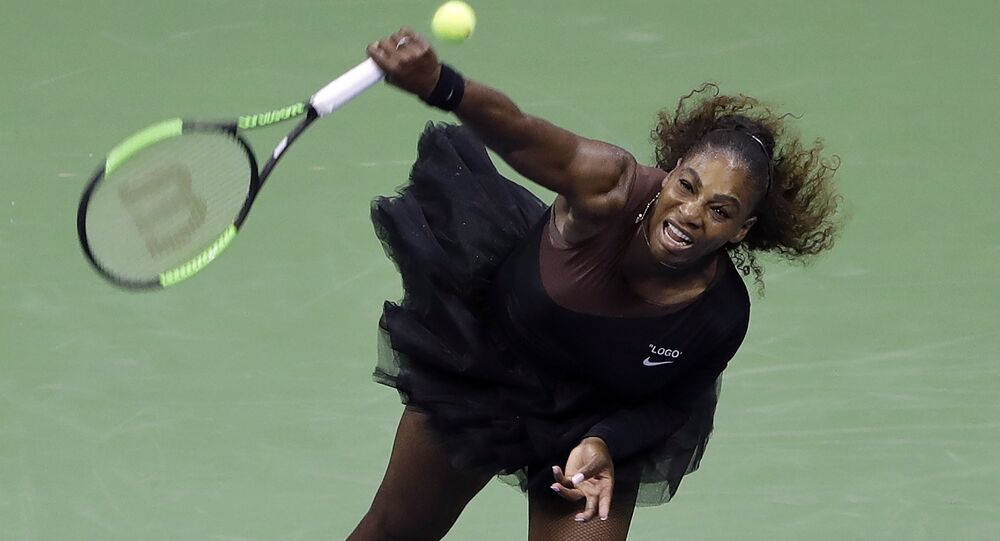 The American tennis ace has prompted scores of exalted reactions from her fans as she won a US Open opening match in a black tutu, days after French Open officials announced they wouldn't let her wear her black catsuit.

Serena Williams hit the court in her victorious US Grand Slam opener against Magda Linette in a ballerina-inspired black skirt Monday night. The 36-year old totally outplayed her Polish rival, 26, in straight sets, 6-4 6-0 in her first US Open match in two years.

Before the match, Williams made clear she's not concerned by the French Open's policing of on-court fashion. "Obviously, the Grand Slams have a right to do what they want to do," she told reporters at her pre-US Open press conference, "but I feel like if they know that some things are for health reasons, then there's no way that they wouldn't be OK with it."

willing to design dresses for her for life.

The victory came shortly after the French Open officials announced new rules to regulate players' uniforms for the 2019 edition. "I think that sometimes we've gone too far," said Bernand Giudicelli, the president of the French Tennis Federation, singling out Serena's black Nike catsuit, which she wore in her French Open opening match earlier this year.

Catsuit anyone? For all the moms out there who had a tough recovery from pregnancy—here you go. If I can do it, so can you. Love you all!!

Williams, a three-time French Open champion, is said to have worn her catsuit not just as an homage to Marvel superhero Black Panther — the full-body garment compression supposedly helped prevent life-threatening blood clots, something that she has been struggling with for years.

Her US Open outfit garnered increased attention in the tennis world and elsewhere, with many people praising Serena's on-court "response" to the catsuit comments.

Serena Williams was told she wasn't allowed to wear her “Black Panther” catsuit back to the French Open because she had to "respect the game."

So she showed up in a tutu. 💯https://t.co/WifbS5iDpk

Serena Williams is the Beyonce of sports

French Open: The catsuit is inappropriate and does not meet our oppressive, paternalistic standards of femininity. @serenawilliams: Watch me dominate the court in a tutu. pic.twitter.com/yWaGtz7n5E

Aspire to be as badass as Serena Williams winning the first round of the U.S. Open in a tutu.

You can take the superhero out of her costume, but you can never take away her superpowers. #justdoit

With a total of 23 Grand Slam titles, the US tennis pro holds the most Grand Slam trophies in singles, doubles, and mixed doubles combined among active players and is second in the all-time list. She has topped the WTA rankings for 319 weeks in total, which puts her third behind Steffi Graf and Martina Navratilova.