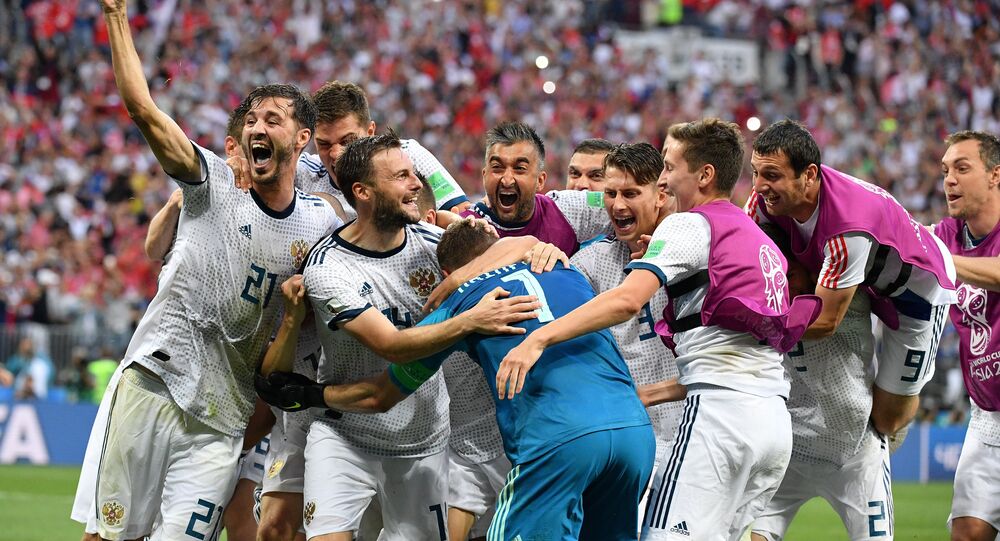 The 2018 FIFA World Cup in Russia hasn’t failed to deliver in terms of excitement, drama and surprises, with a number of football heavyweights – widely tipped to win the tournament – failing to get far, while some underdogs have looked impressive, progressing to the quarter finals.

Russia’s inspired win over Spain on penalties in their round of 16 match propelled them into the quarter finals, and the squad’s on the pitch impressive performance throughout the World Cup has significantly increased the value of the national team.

Research by Bonus Code Bets found the value of the Russian national football team to have increased by 17 percent over the course of the tournament – more than any other team by a substantial margin.

© REUTERS / Grigory Dukor
Complacency & Mistakes: Examining Spain’s Lackluster 2018 World Cup Performance
Although their shock victory over Spain is likely to account for a large chunk of this increase in value, Russia’s performance in the group stages, with two wins and a draw, plus some phenomenal goals, also raised interest in Russian players in the international football transfer market.

Russian players who have demonstrated their talent on the international arena and impressed football pundits include the likes of striker Artem Dzyuba, winger Denis Cheryshev, goalkeeper Igor Akinfeev, and midfielder Aleksandr Golovin, who is currently in talks with Chelsea FC.

Commenting on his team’s research, Alexander Kostin said it will be interesting to see if teams with very high squad values will get further than cheaper teams over the remainder of the exhilarating 2018 World Cup.

“We wanted to look at the value of all players in the tournament. It will be interesting to see whether squad value does indeed equate to success in Russia,” he said in a press release sent to Sputnik.

France has the highest valued collection of players, with its 23-man squad valued at almost $1.3 billion, followed by Brazil and England, all of which have cumulative player valuations in excess of $1 billion.

In contrast to the rising value of Russia’s squad, off the back of victories and standout performances, Belgium and Croatia have seen their team valuations decline during the World Cup, by four and five percent, respectively.

© Sputnik / Vladimir Pesnya
Sweden Beats Switzerland 1-0 to Reach First FIFA World Cup Quarter-Finals Since 1994
In terms of quarter finals fixtures, Sweden faces England, which has a squad valuation over seven times greater than theirs. Even star striker Harry Kane is individually worth more than the combined value of Sweden’s 23-man 2018 WC squad.

Russia will compete with Croatia for a place in the semi-finals, and, despite recent player valuation hikes to Russian players, the Croatian squad remains 2.25 more valuable. The knockout match, which could go to penalties, will take place on Saturday evening at the Fisht Olympic Stadium in Sochi.