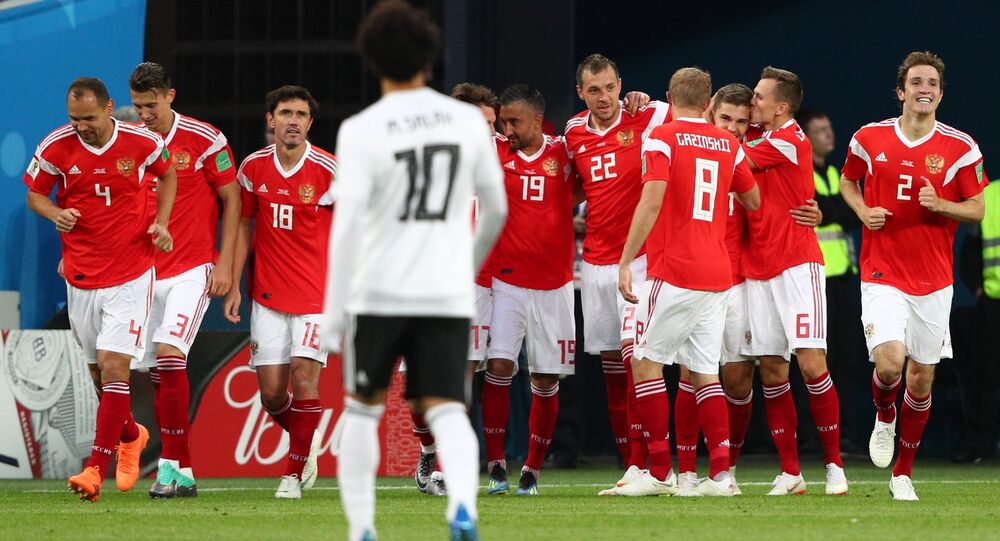 FIFA has reaffirmed to Sputnik that the Russian national football team was not involved in doping following fresh accusations by Mail on Sunday.

FIFA has stated that an exhaustive investigation into possible doping violations in Russian football was conducted in close collaboration with the World Anti-Doping Agency (WADA), with the latter accepting the football association's conclusions.

The organization went on to say that Mail on Sunday journalist Nick Harris' article accusing the Russian team of doping was based on cherry picking the facts, rather than addressing FIFA's actual findings.

"As usual, Mr. Harris provides the public with a very selective view of the facts. His article gives ample space to the opinions of people external to the investigations, and voluntarily fails to state the key point of this matter: FIFA's investigations were conducted in collaboration with WADA, and WADA agreed with FIFA's conclusions. Therefore, we can only conclude that Mr. Harris believes that WADA's position is not relevant in this case," FIFA said in a statement to Sputnik.

© Sputnik / Ramil Sitdikov
FIFA Found No Evidence Russian Footballers Violated Doping Rules Ahead of World Cup
FIFA also provided Sputnik with a copy of the statement it sent to Mr. Harris ahead of the publication of his piece. The football association informed him that it had conducted "wide-ranging investigations into this matter with the result that, to this date, insufficient evidence was found to assert an anti-doping rule violation by any footballer. The investigations concerning Russian players named for the provisional squad of the FIFA World Cup in Russia … have been completed and the cases have been closed."

FIFA also emphasized to Harris that it had looked at all possible evidence, "leaving no stone unturned." This included conversations with Richard McLaren and Grigory Rodchenkov (who charged Russia with state-sponsored doping at the 2014 Olympics), the retesting of all suspicious samples for prohibited substances, forensic analyses, analyses of data from the Moscow lab LIMS database and the target-testing of Russian players.

"These investigations were conducted in close collaboration with WADA and WADA agreed with FIFA's conclusions to close the cases," the FIFA letter to Harris said.

On Saturday, Mail on Sunday released a piece accusing FIFA of "covering up" a Russian player's positive drug test and charging Russia with "fresh doping turmoil." The article included conversations with McClaren and Dick Pound, another investigator involved in accusing Russia of a state-sponsored doping program. However, FIFA told Sputnik that "the opinions of Mr. Pound and McLaren are uninformed in this case, since Mr. Pound was never involved in the investigations into potential doping in Russian football, and Mr. McLaren hasn't had any involvement since summer 2017."

mailonsunday.co.uk
Screengrab of the Mail on Sunday piece.

Ultimately, FIFA recommended that Mr. Pound and Mr. McLaren address whatever concerns they have to WADA, "since WADA approved FIFA's conclusions."

The football association emphasized to Sputnik that while everyone is "free to express opinions and wishes … under the rule of law, sanctions cannot be imposed without proper evidence."