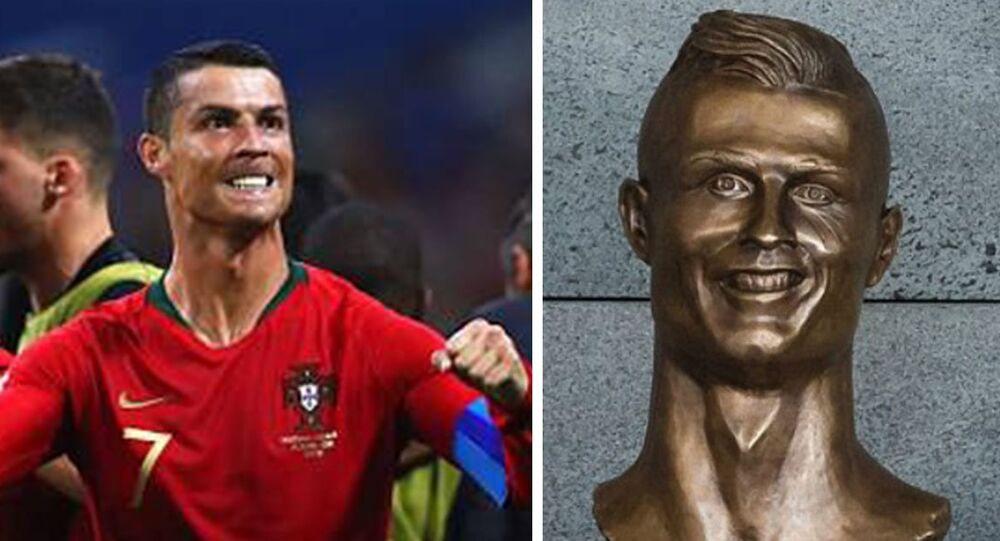 The night before Portugal's superstar striker scored his historic hat-trick at the 2018 FIFA World Cup, his goofy-looking brass bust from the Madeira Airport was swapped with a new sculpture. Social media users are puzzled by the replacement.

The disappearance of the brass bust of Madeira-born international football legend Cristiano Ronaldo overnight on June 16 has disappointed its fans across the world. The sculpture of his head, which was put in Madeira Airport last year, soon grew into a proper Internet sensation for its doubtful resemblance to the metrosexual Portuguese player, who is particularly known for his attention to his looks.

The work of artist Emanuel Santos was mocked and ridiculed for its goofy smile and face since then, and eventually was replaced with another, unsmiling version featuring a different hairstyle.

​According to the Airport management, CR7 museum asked them to replace the meme-inspiring tribute with a new bust at the request of Ronaldo’s relatives.

Ronaldo's brother Hugo Aveiro confirms the bust at Madeira Airport was replaced after family request. The original sculptor Emanuel Santos wasn't even notified about the switch. "If he was taken by surprise, it's not my problem", Hugo said pic.twitter.com/xZRmcUIdWx

​Airport director Duarte Ferreira, in an interview with Madeira Island News, rebuffed the criticism for removing the bust voiced by social media users, saying that “the people have the right to have their opinion”. He also said that the original work has been saved, but they don’t know what to do with it.

For many Twitter users the answer is obvious – they want the sculpture to be back on display. Some even want to petition the airport, asking to get that brass Ronaldo back.

😂 There's a petition on https://t.co/4zjlmyrcmm titled 'Petition for the immediate return of Cristiano Ronaldo's bust to Madeira airport, an attraction for our island. New one unacceptable.'

​The replacement hasn’t been well received either.

That bust of Ronaldo looks more like a younger Andy Griffith.

Ronaldo's iconic bust at Madeira Airport has been changed. It was not officially unveiled and neither the government nor the author of the original bust were notified.

The change was requested made by Ronaldo's brother, who manages his museum.

It's still not brilliant. pic.twitter.com/6CMYZnTk2A