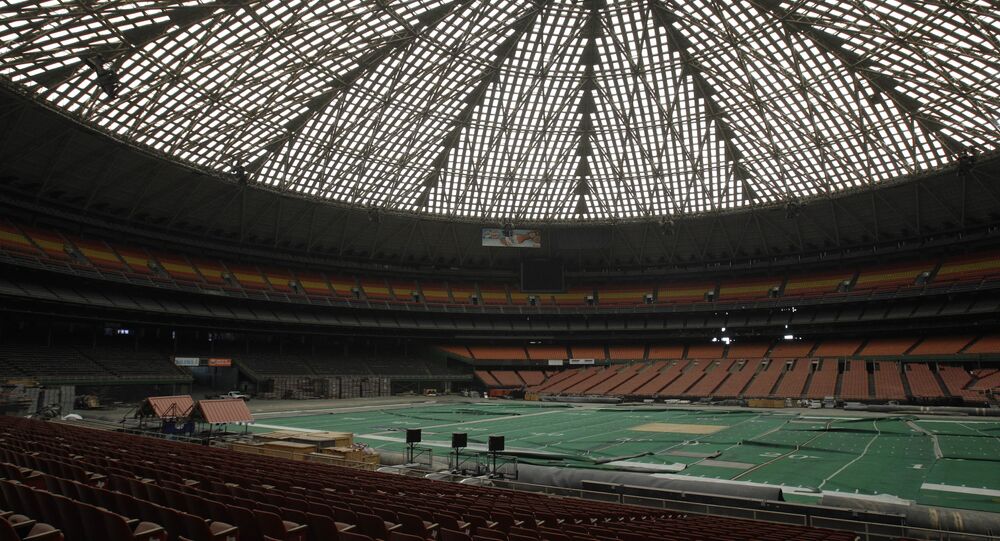 'Eighth Wonder of the World' Saved From the Bulldozers...to Become a Parking Lot

When the Houston Astrodome in Texas was built in 1965 it was dubbed the "Eighth Wonder of the World" because of its extraordinary architecture. Now, long after the two sports teams that called it home moved out, there are plans to give it a new lease of life at a cost of $105 million.

On Sunday, April 9, a special "Domecoming Party" is planned so that everyone who has special memories of the famous old baseball and NFL stadium can have a final moment with their memories before work begins on the revamp.

The Astrodome was the first stadium of its kind.

Previously soccer, baseball and athletics arenas had always had four stands, one on each side.

But the architects and structural engineers discovered a way of building a huge domed roof — which was 18 stories tall — and covered more than nine acres.

25 years ago today, Nolan Ryan pitches for the last time in the Astrodome, but as a Texas Ranger during an exhibition game with the Astros. 53,000 people were there. Once upon a time in Houston. @AstrosDaily #khou pic.twitter.com/okKE78YDzx

The enormous scoreboard had to be lifted into position above the pitch and a special air conditioning system was introduced so that players and spectators alike could cope with the stifling heat of a Texan summer.

The Astrodome had several teething problems.

Firstly baseball players complained that light reflecting from the glass panels in the roof made it hard for them to see when they were trying to catch a ball in the air.

4/2/93 An Astrodome crowd of 53,657 watches Nolan Ryan pitch his final game in Houston during the Astros-Rangers Lone Star Classic exhibition. It was the largest baseball crowd ever to see a game in Texas at that time. pic.twitter.com/diJhtzNcFB

When the panels were painted white this led to another problem. The lack of direct sunlight caused most of the grass to die, which led to artificial turf being introduced, what became known as Astroturf.

The Astrodome was home to the Houston Astros baseball team and the Oilers NFL franchise but both left long before 2006 when the building — a marvel of civil engineering — faced the prospect of demolition.

Good morning from the #Astrodome. One week until #Domecoming. pic.twitter.com/A7gDSk7aWj

​Former Stadium Will Have Space For 1,40 Cars

Various plans to resurrect it fell by the wayside over the years but every year Harris County — which includes Houston — was paying US$170,000 on electric bills and flood insurance.

In February the Harris County Commissioners Court approved a US$105 million plan which would convert the inside of the former stadium into a parking lot with space for 1,400 cars and 500,000 square feet of space which would be rented out for festivals, conferences and other commercial uses.

Work is due to start in October and the facility will be open in February 2020.

The Astrodome Conservancy, which was set up in 2016 to preserve the architectural history of the former stadium, is not charging for Sunday's Domecoming Party but all 25,000 tickets were snapped up online within hours of being made available.

​The conservancy was set up by three conservationists, Phoebe Tudor, Minnette Boesel and Judy Nyquist, who played a key part in getting the Astrodome designated as a protected State Antiquities Landmark, which made it almost impossible to demolish.

"The Astrodome is still very much as it was. A lot of seats have been removed and sold off several years ago, but you still get the sense of wonder when you walk into that big space," Ms. Tudor told the University of Houston's media website.

Nearly 53 years ago the Astrodome made its grand debut https://t.co/V0TWOfBmGF

The Astros pitched their last ball at the stadium in 1999 and the following year moved into a new stadium, which is nowadays known as Minute Maid Park but was originally called Enron Field, after the giant Houston-based energy company who would file for bankruptcy in 2001.

Last year the Astros won the MLB World Series for the first time in their history.

#OnThisDay In 2001, 67,925 fans witnessed the greatest wrestling pay-per-view of all time, as Stone Cold Steve Austin defeated The Rock in the main event of WrestleMania X-Seven at the Houston Astrodome.
I can’t remember last week, but that date will stick with me forever. pic.twitter.com/yx9AeVPlrC

The Oilers vanished off the face of the Earth in 1996 after a disastrous final season at the Astrodome which was played in silence in front of crowds of fewer than 20,000.

The Oilers lost their place in the NFL to the Tennessee Titans and when Houston got a new team, the Texans, they moved into the NRG Field stadium, right next door to the Astrodome.

UCLA coach John Wooden, right, walks off the court with Kansas' Ted Owens after UCLA won 68-60 in the 1971 national semifinal at the Astrodome. Scoreboard only showed F for forward and C for center (no G for guard since it was usually a baseball board). "F LS" for team fouls. pic.twitter.com/Crhizu4UG6

Ironically the covered stadium with the largest seating capacity in 2018 is the AT&T Stadium, just up the road in Arlington, which is the home of the Texas Rangers MLB franchise. It holds 80,000 but that can be expanded to 105,000 if required.

The sixth biggest covered stadium in the world is the Krestovsky Stadium in St Petersburg, which will host games during this summer's World Cup in Russia.​