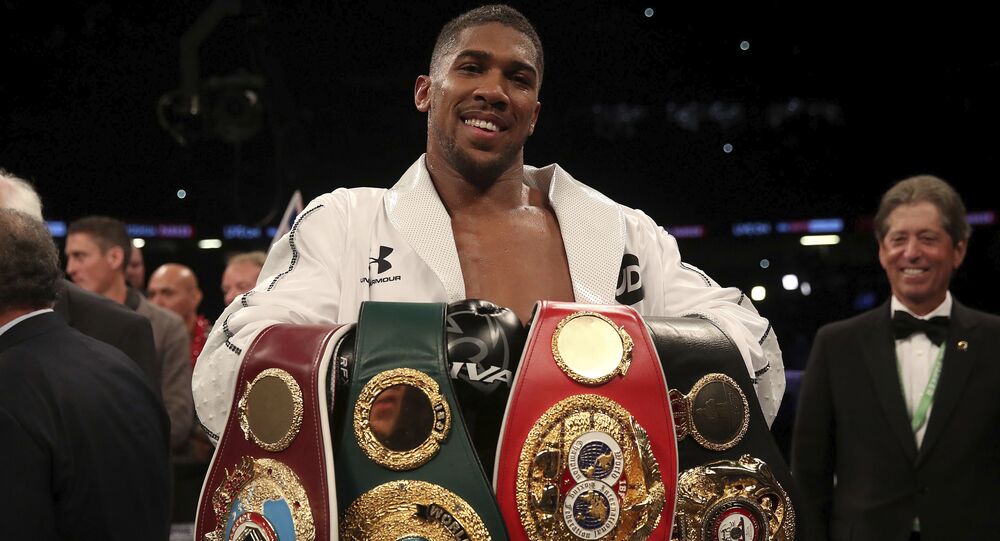 The WBC heavyweight champion, Deontay Wilder, from the US, has reportedly agreed to come to Britain to fight Anthony Joshua, who holds the WBA, IBF and WBO titles. Sputnik looks at how Joshua-Wilder would compare with previous heavyweight showdowns.

Joshua — who has been derided by former champ Tyson Fury — is aiming to become the first undisputed heavyweight since Lennox Lewis almost 20 years ago but he needs to beat Deontay "The Bronze Bomber" Wilder first in a showdown which is likely to be an absolutely huge fight.

But how does it compare with previous heavyweight showdowns?

Introducing you 2 the sweet science of boxing 🔥 Hit & don't get hit 🔥 pic.twitter.com/BbhqSwoxef

When the "Galveston Giant" won the world heavyweight championship in 1908 the boxing establishment in his native United States were crestfallen…because Jack Johnson was black!

Deontay Wilders team has said Wilder is willing to face Joshua in the U.K this summer and are ready to begin negotiations’ sources close to wilder have stated he will accept a 60/40 split in favour of Joshua #JoshuaWilder #WilderJoshua 🇬🇧🇺🇸 pic.twitter.com/oq8aDGNaTu

He was the first black man to hold the title and there was an immediate campaign to find a "Great White Hope" who could take on and defeat him.

By July 1910 all of white America's hopes were pinned on the former champion Jim Jeffries, who had retired undefeated a few years previously.

Jeffries and Johnson met under the blazing sun in Reno, Nevada and it was a complete mismatch.

Johnson chased his opponent around the ring before battering him into submission in the 15th round.

But when news of Johnson's victory reached the east coast it touched off numerous race riots and several people were killed.

Johnson would eventually lose the title to Jess Willard in 1915 in a fight which remains highly suspicious.

Boxing experts have long believed Johnson deliberately through the fight. In footage of the bout Johnson can be seen shielding himself from the sun despite supposedly having been knocked unconscious.

Johnson, who was known to enjoy the company of white women, would spend the rest of his career fighting abroad after a conviction under the Mann Act.

While it would look paltry compared to last year's mega-fight between Floyd Mayweather and Connor McGregor, the Dempsey-Carpentier fight was the first to bring in US$1 million at the gate.

Dempsey — known as the Manassa Mauler — had won the title from Jess Willard in 1919 and dominated the heavyweight division in the early 1920s.

But rumors abounded that Dempsey had dodged the draft for World War One, in stark contrast to Carpentier, who was a war hero, having fought as a pilot in the nascent French air force.

Many of the 90,000 fans who packed into a specially-built arena in New Jersey were rooting for the Frenchman, who was stepping up from light-heavyweight.

Tickets ranged from $5 to $50 and sold out quickly. Promoter Tex Rickard later said he should have doubled the prices.

In the second round Carpentier broke his right thumb and in the fourth round, unable to fend off Dempsey, he was floored twice and finally counted out.

In the 1930s racism was still a live issue in the United States but although he was African-American Joe Louis — the "Brown Bomber" — became a national hero and his battles with Germany's Max Schmeling were set against the backdrop of a looming world war.

The unfortunate Schmeling just happened to reach the peak of his career at the height of Nazism. He was not a Nazi and was uncomfortable with attempts to claim his victories proved Aryan superiority.

In 1936 the "Black Uhlan of the Rhine" defeated Joe Louis in a non-title fight, a victory which Joseph Goebbels' Nazi propaganda machine dined out on.

But the following year Louis won the world heavyweight title from Jim Braddock — whose life story was later told in the film "Cinderella Man" starring Russell Crowe — and in June 1938 was set for a rematch with Schmeling.

More than 70,000 fight fans turned up to see the fight in New York's Yankee Stadium and millions of Germans tuned in on the radio to see how their hero would get on.

Louis destroyed Schmeling in the first round. The German was knocked down three times and his trainer threw in the towel.

Hitler was reportedly furious and forced Schmeling to join the Luftwaffe as a paratrooper.

Schmeling survived the war and in 1971 met up with his old foe, Louis, in Las Vegas where both men shook hands and shared memories about the "Battle of the Century."

Cassius Clay — or Muhammad Ali, as he became — was involved in more heavyweight showdowns than any other fighter.

He "shook up the world" by defeating the intimidating and seemingly unbeatable Sonny Liston in 1964 but was banned from boxing for three years after refusing to serve in the US military in Vietnam.

Ali returned and engaged in an epic trilogy of fights with Smokin' Joe Frazier.

But Frazier was savagely beaten in Kingston, Jamaica in 1973 by 24-year-old George Foreman, who became world heavyweight champion.

What a robbery… WOW‼️ @joeboxerparker great job Bro omg don’t apologize you did nothing wrong. True champion. @anthonyfjoshua, I ACCEPTED 100%

P.S. Take AFRICA off your Arm. They’re warriors. You from UK brotha pic.twitter.com/09yv1bCqrq

Promoter Don King — who famously started the Jamaica fight in Frazier's corner and ended it in Foreman's — spotted the potential for a mega-fight with Ali.

King decided to hold the fight in Kinshasa, the capital of Zaire, after the dictator Joseph Mobutu stumped up the money needed to pay both fighters.

The "Rumble in the Jungle" would go down in history as a classic.

In a hot and humid atmosphere, Ali used his "rope-a-dope" strategy to tire out Foreman and then in the eighth round Ali knocked him out.

Ali became a legend but in 1994 Foreman would become heavyweight champion again, at the age of 45.

"Iron Mike" Tyson was a force of nature.

In his prime he was the most terrifying opponent in boxing and he became the youngest heavyweight champion in history in 1986, aged 20.

But his career was put on hold in 1992 when he was convicted of rape — a crime he has always denied.

When he was released in 1995 Tyson still had a punch and could intimidate other fighters but he was fallible and prone to anger when he became frustrated by an opponent's boxing skills.

Tyson reclaimed a version of the heavyweight title in March 1996 but eight months later he was knocked out by Evander "The Real Deal" Holyfield.

The fight included a rematch clause and in June 1997 the pair prepared to go at it again.

The clash at the MGM Grand in Las Vegas was watched by millions on pay-per-view TV and viewers looked on in horror when Tyson, frustrated and behind on points, spat out his mouthpiece and bit a huge chuck out of Holyfield's ear.

Tyson was banned from boxing for a year and eventually retired in 2005.

There can only be 1! I’m the true king 🤴 & think people seen that tonight #limitededition #Gypsyking.🙏🏻 stay blessed & remember we ent never left!😜