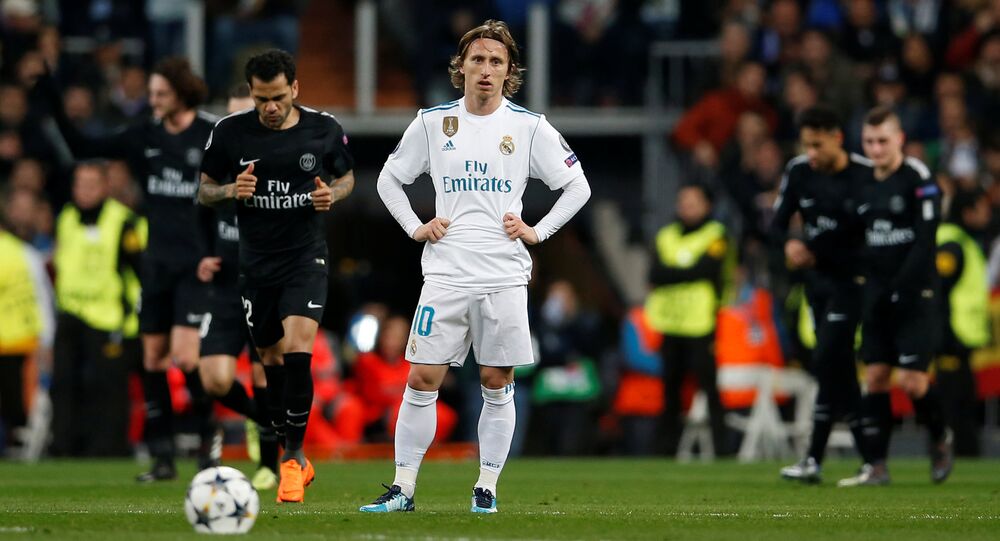 Real Madrid's star midfielder Luka Modric could go to jail for up to five years for perjury. Modric will captain Croatia in the World Cup in Russia this summer but many of the country's fans loathe him for his links to two brothers who dominate the nation's football.

Modric is being investigated for lies he allegedly told the Croatian authorities about his sale from Dinamo Zagreb to Tottenham Hotspur.

The 32-year-old midfielder's name cropped up as prosecutors in Osijek investigated the affairs of Zdravko Mamic, a former director of Dinamo, whose family is said to hold a sinister influence over Croatian football.

Mamic, who survived an assassination attempt in August last year, is accused of embezzlement and tax fraud in Croatia.

The Croatian public prosecutors office has brought charges of perjury against Luka Modric relating to his testimony during the 2015 corruption trial against former Dinamo Zagreb executive director Zdravko Mamic. [as] pic.twitter.com/BbeF51JP48

"It's a tricky situation. I love watching Luka on the pitch. He's our best player. Personally I don't think a player should ever be put in the position he was in at Dinamo," Mr. Zoric told Sputnik.

If convicted of perjury Modric — who plays alongside Cristiano Ronaldo at the Bernabeu — could face up to five years in prison in Zagreb.

Luka Modrić could face five years in prison after the former #thfc midfielder was charged with giving a false testimony during a corruption trial in 2017. pic.twitter.com/7COrKMZRAA

Transfer to Tottenham Under Spotlight

In testimony to the court in June last year Modric said he had a deal with Mamic to pay Dinamo 50 percent of the 26 million euro (US$32 million) contract with Tottenham when he signed for the British club in 2008.

But prosecutors claim there was no legal contract and it was a private deal which was backdated only after the player had already been sold to the London club.

Modric is set to lead the Croatian national team at the World Cup in Russia in June and the Croatian football federation said it would stand by him.

"We believe that in this process he will prove his innocence as well as groundlessness of the charges," the federation said.

"Most Croatians want Croatia to do well in the World Cup. We have a very special generation of players and this will be their last chance to accomplish something," Mr. Zoric told Sputnik.

He said Croatian football fans were dreaming of a run like the team had at the 1998 World Cup, where Croatia made it as far as the semi-finals before being knocked out by the hosts and eventual winners, France.

Another transfer which was investigated was the sale of defender Dejan Lovren to Lyon in France. He has since moved to Liverpool, who are currently second in the English Premier League.

​Many Croatian football fans consider the Mamic family to be a baleful influence and the trial is being seen as a test of whether Croatia's judiciary can tackle the allegedly endemic corruption in the game.

But Mamic gave a press conference at Dinamo's stadium last week at which he laid into the prosecutors, the state's attorney's office and even Croatian basketball star Dino Rada.

"You are crazy to prosecute Zdravko Mamic and an icon of Croatian football, Luka Modric…I come to you with with concrete answers, paperwork and I do not hide behind anyone," Mamic rambled during a diatribe against the lead prosecutor Dinko Cvitan.

© AFP 2020 / Georges GOBET
Croatia supporters pose for a picture during the Euro 2016 group D football match between Croatia and Spain at at the Matmut Atlantique stadium in Bordeaux on June 21, 2016

Mamic has a lot of allies at the Croatian football federation and their executive committee recently gave him a clean bill of health.

"My great victory and satisfaction is that the executive committee concluded that Zdravko Mamic did not harm Dinamo but has worked for their good fortune," Mamic said in last week's press conference.

In August last year, while visiting his ancestral home village in Herzegovina, two masked gunmen emerged from the bushes and fired at Mamic.

He was wounded in the leg but the 58-year-old played down the incident.

Our thoughts and prayers are with our former transfer advisor Zdravko Mamić and his family following the shooting. #JeSuisZdravko pic.twitter.com/Pz7OGu61sI

Croatian football has long been dominated by Dinamo Zagreb and their arch-rivals Hajduk Split, both clubs which were formed long before the demise of Yugoslavia, but Mr. Zoric said Dinamo fans hate Mamic as much as Hajduk supporters.

Dinamo won the national league 11 times in succession until last season when HNK Rijeka beat them to the title.

Modric has recently returned from injury and will be in the Real team to play Paris St Germain in the Champions' League on Tuesday.