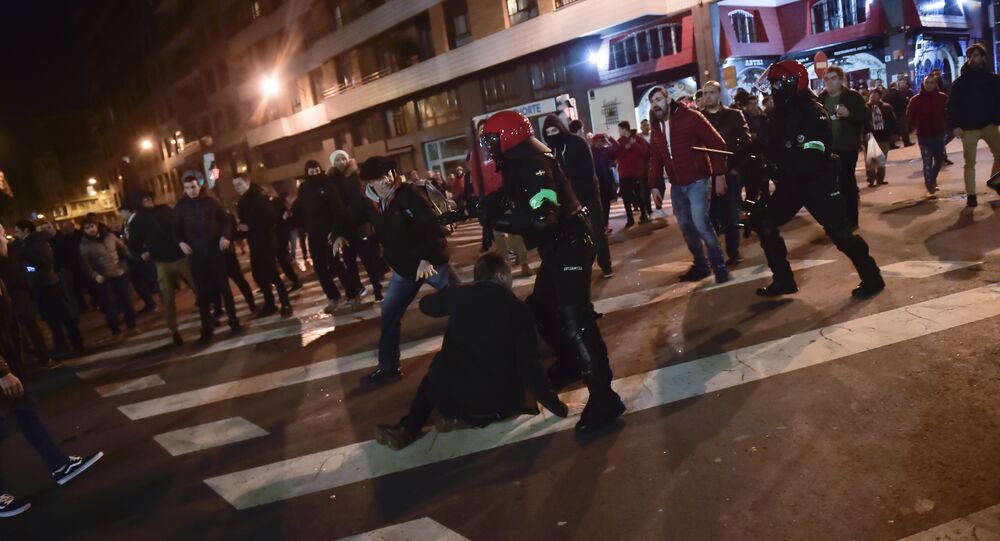 Russian football fans engaged in a clash with Spanish ones right before a match between Spartak Moscow and Athletic Bilbao that took place on February 22 and left 3 people injured and led to the death of one police officer.

A representative of the Russian FC Lokomotiv fan society in his interview with Sputnik Mundo assured that there will be no problems between the club's fans and those of Atlético Madrid during the upcoming Europa League matches between the two teams that are to take place in Madrid on March 8 and in Moscow on March 15.

"The last thing Atletico fans should be afraid of are problems with Russians, both in Madrid and in Moscow," he added.

According to him, only between 100 and 200 Russian fans will attend the match that is set to take place in Spain, as the prices for airplane tickets will be skyrocketing due to the event which will take place on the March 8 — international women's day.

The potential for conflict is very low, as the opposing club comes from Madrid. The Russian FC fans representative explained that fans of Atlético Madrid behave much better than those of Athletic Bilbao, who participated in the clashes with Russian fans that happened before the match with Moscow FC Spartak which took place in their hometown.

"I've been both in Madrid and Bilbao and I can see the difference. I've [never] seen such inadequate fans as I did in Bilbao. They are total nuts. Police there cover fans and vice versa," he told.

The representative complained that Spanish media accused solely the Russian fans, ignoring Athletic Bilbao supporters' role in igniting the clashes in the first place, although he noted that later some of them changed their stance and stopped blaming only one side of the conflict.

He also recalled another notable case when in 2012 Russian fans were attacked by an unidentified group of people when they were celebrating the victory of Lokomotiv over local Athletic in one of the pubs.

Clashes ignited in Bilbao between the fans of FC Athletic and FC Spartak on February 22. The incident happened before the match itself and led to 3 people being injured and 9 more apprehended. During the clashes, one of the policemen suffered a heart attack and later died.

If You’re Happy And You Know It, Riot: Moroccan Football Fans Tear Into Paris