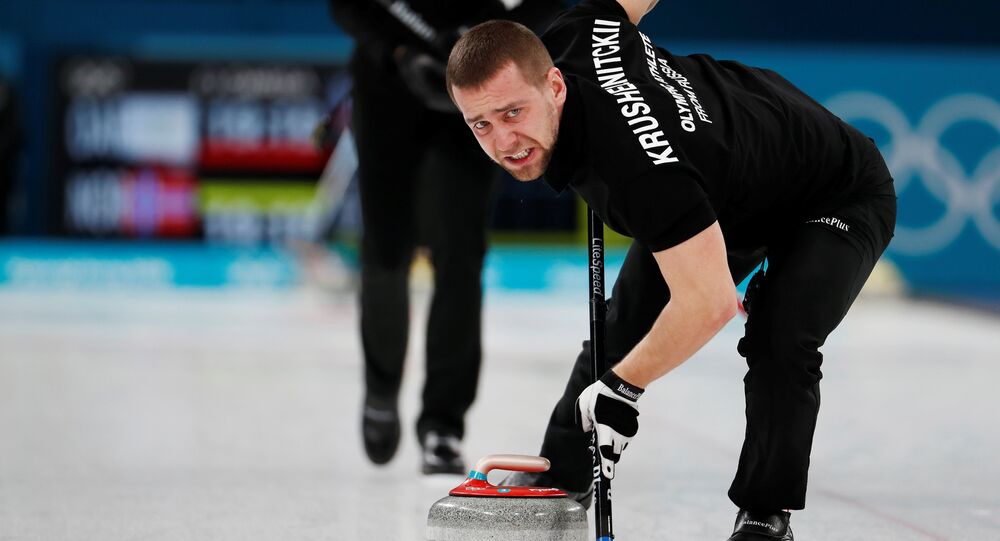 Russian Curler Krushelnitckiy Wants to Take Part in Next Olympics

Krushelnitckiy earned a bronze medal with his wife and partner Bryzgalova at mixed doubles curling at the Olympics in Pyeongchang. The follow-up probes showed the presence of the prohibited substance meldonium in his doping sample. As a result, he was stripped of his medal and his results were annulled.

ST PETERSBURG (Sputnik) — Russian curler Aleksandr Krushelnitckiy, who tested positive for doping at the 2018 Winter Olympics, said that he and his teammate Anastasia Bryzgalova want to take part in the next Olympic games.

"The Olympic games were our goal toward which we have been striving for a long time. We have shown a good level both in the country and in the world. We deserved a medal, but we were deprived of it. We want to take part in the Olympics once again, if we have such an opportunity," Krushelnitckiy told reporters.

© Sputnik / Ramil Sitdikov
30 Russian Athletes to Compete in Paralympic Games as Neutrals - IPC
Krushelnitckiy said that he felt responsible for the fact that the Russian team was not allowed to walk at the closing ceremony under the Russian flag. In spite of the expectations, the Executive Board of the International Olympic Committee (IOC) refused to give such an opportunity taking into account the two cases of doping test failure by Russian athletes at the Olympics.

The athlete condemned media speculations on the possible involvement of his former girlfriend in the doping scandal.

In December, the IOC suspended the Russian Olympic Committee over an alleged state-sponsored doping scheme in the country, which led to, according to the IOC, doping abuses by Russian athletes during the 2014 Winter Olympics. The allegations have been rejected by the Russian authorities.

During the Olympics in South Korean Pyeongchang from February 9 to February 25, Russian athletes were not allowed to participate under their national flag and performed as the team of Olympic Athletes from Russia (OAR) under a neutral Olympic flag in line with the IOC decision. The Russian athletes managed to win 17 medals, including two gold, six silver, and nine bronze ones.