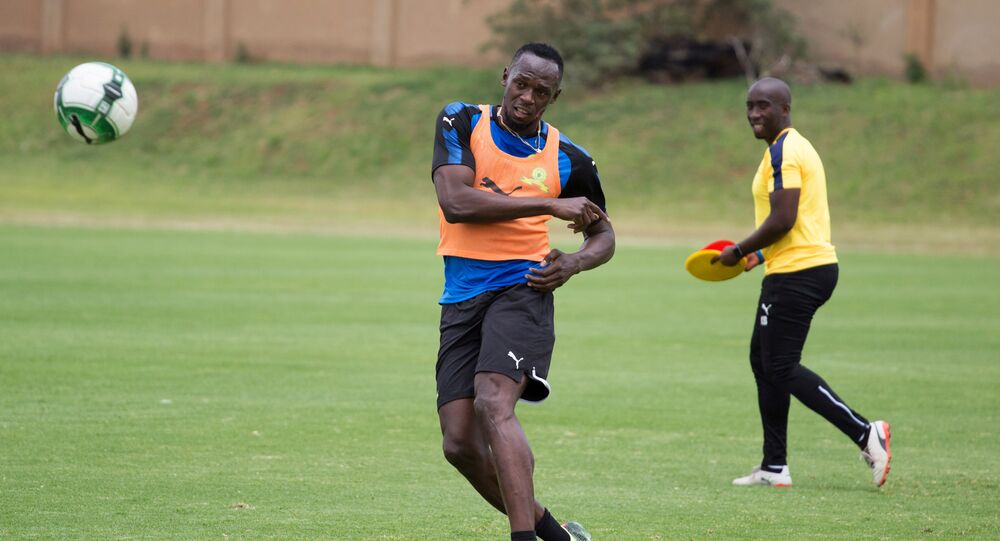 After wrapping up his sprinting career in 2017, 31-year-old track and field legend Usain Bolt has repeatedly signaled his readiness to join Manchester United.

Track & field icon Usain Bolt has written in his Instagram account that he's inked a contract with a football club and that the name of the team will be unveiled on February 27.

The 31-year-old Jamaican, who won eight Olympic gold medals in sprint events, announced the end of his career last year, after the 2017 IAAF World Championships in London.

I've signed for a football team! Find out which one this Tuesday at 8am GMT 👀⚽️

Since then, he has repeatedly underscored his interest in trying out for a football team, citing Borussia Dortmund and Manchester United, among other clubs.

Twitter's reaction was immediate, with many piling praise on Bolt's move and launching guesswork as to which football club the retired sprinter will choose.

Apparently, @usainbolt has just signed for a football team.

Rumor has it, that it's @BVB

Imagine this card in FIFA 😆 pic.twitter.com/0MOHNT4SMo

@usainbolt is signed to a football club 👏🏿. We await the announcement.

The deal was, if Glenn Tamplin sacks himself, Usain Bolt signs for Billericay town football club on Tuesday #Bolt

Usain Bolt has announced he has signed for a football club. The team will be revealed tomorrow. Any guesses? pic.twitter.com/5kYBLZWv4Y

Usain Bolt has announced that he has signed for a football team, and that he’ll reveal who it is tomorrow 👀https://t.co/WNHeNY9OZU pic.twitter.com/2FiOFmfW2y

Usain Bolt is signing in to a football club to stay relevant because life is progressive and retirement is deadly.
Who are you not to upgrade?

Usain bolt sign a deal with a football club? Wow

Also an 11-time world champion, Bolt remains the world record holder in the 100 meter and 200 meter events, which he covered inr 9.58 seconds and 19.19 seconds, respectively.

Maradona Statue Unveiled in India and... Gets Mocked Even More Than Ronaldo's