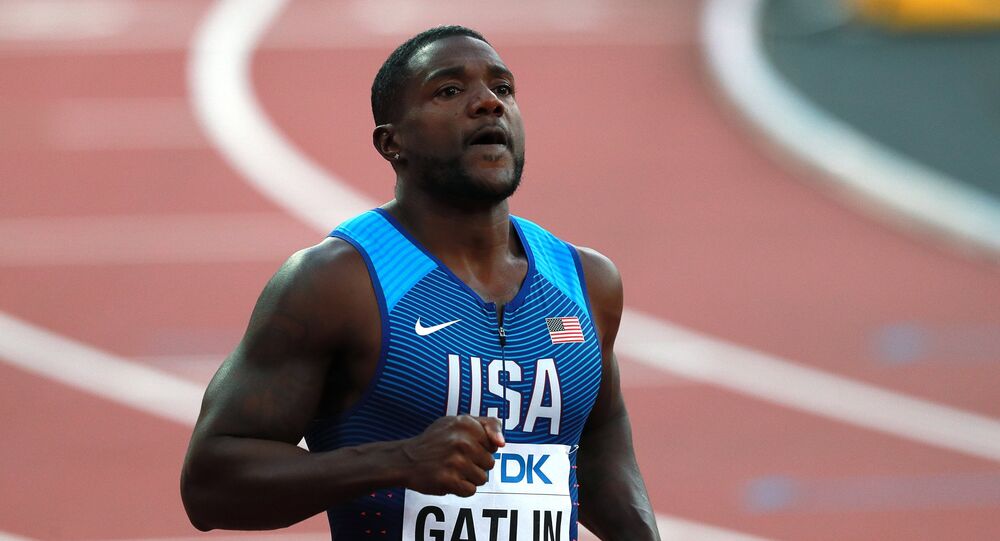 'Everybody Does It': Covert Investigation Ignites Doping Row in US Olympic Team

A leading Team USA track and field Olympic athlete is embroiled in a doping scandal, following revelations from his close associate, as more disclosures are expected to come.

An undercover investigation conducted by The Telegraph's reporters have uncovered  the potential use of prohibited performance-enhancing drugs by the US Olympic medalist Justin Gatlin, who holds the title of champion in the men's 100 meters.

The newspaper's investigation was launched following  second-hand reports that certain US sports agents and coaches are actively involved in providing and administering doping drugs to some of the country's biggest athletes, effectively evading the regulators.

In the due course of its enquiry, the reporters got in touch with Robert Wagner, an Austrian train station manager who later became a leading agent in the Olympic sports industry, representing a number of high-profile sportsmen.

© Sputnik / Alexey Malgavko
Fancy Bear Revelations: Michael Phelps Used Meds Banned for Horses
Posing as representatives of an actor that wanted to quickly get in shape for a role, the reporters approached Wagner, who offered to supply performance-enhancing drugs, including testosterone and human growth hormone in exchange for $250,000.

The sports agent also suggested that the fictitious actor should train with gold medalists under the supervision of Olympic-grade trainers, eventually referring the reporters to Justin Gatlin and his coach Dennis Mitchell, an Olympic gold champion in track and field himself.

Wagner had little reservation about offering to provide the illicit substances, claiming that "there is so much room for blackmailing and dirty games" in Olympic sports.

"Every sport. Whatever does money does corruption," he said, while being covertly recorded.

The agent confirmed that he and Mitchell would be administering the banned substances, which he would acquire through "trusted" doctors in Europe and take to the US.

"I fly to America once a month. This, this is a little box I bring… Nobody stops you when you're in a suit and tie," he said.

The reporters then asked Wagner when was the last time that he was involved in doping athletes to which he replied that it was "three months ago, before the season ended, right now, obviously, and as soon as the season starts."

The agent pointed out the use of specially designed "tailored drugs" rather than common steroids was key to evading the anti-doping regulators, who "cannot really put their finger on it."

"Now it is a money thing, now you have labs and universities design drugs for you which there is no test for," he said before emailing a picture of a syringe and a vial that allegedly contained a synthetic growth hormone.

© Sputnik / Iliya Pitalev
Fancy Bears Hackers Reveal Two US Athletes Used Cocaine Before Rio 2016 Olympics
"It cannot be found in the body… Because it is synthetically produced. You cannot find something like that."

"You can test them up and down but anyway it's not, is not going to find it," Wagner assured the reporters.

He also pointed that the fast-pace of synthetic drug development allows the doping athletes to consistently evade the safeguards put in place by sports authorities, stating that "by the time they [the regulators] have a test, people are already using the next, next generation."

The undercover reporters then had meeting with Mitchell at Gatlin's training camp in Florida during which Wagner again reaffirmed that they used the doping drugs before "with athletes."

When they met Gatlin himself, the sprinter referred to Wagner as his "race track" agent of about five years and a "good guy," whose "connections run deep."

© REUTERS / Lucy Nicholson
World's Fastest Man Usain Bolt Loses Beijing Olympic Gold After Doping Disqualification - IOC
Gatlin was previously banned from international sports once in 2001 and again 2006, yet managed to evade the lifelong expulsion from the sport, owing to some "exceptional circumstances."

In 2017, he competed in the World Championships in Track and Fieldsecuring a staggering win over Usain Bolt, who was earlier dubbed by the media as the "world's fastest man."

He was also on the roster of Team USA for the 2012 London and 2016 Rio Olympics, where he took bronze and silver medals respectively.

Gatlin & Dennis Mitchell are examples of why the fight for Clean Sport can be so depressing. 2 people embroiled in doping controversy for a long time, proven cheats. Yet over last few years have been rewarded as World Champ & USA team coach: What message is sent?

Following the publication of The Telegraph's story, Gatlin "categorically denied" the use of doping and tried to distance himself from Wagner, claiming that the Austrian is not his regular agent and firing Mitchell, who also denied doping US athletes.

Despite the compiled evidence that included video recordings and text conversations, Wagner also denied the accusations, claiming that he "knew what was going on" and "obviously played along" with the reporters.

Nevertheless, a spokesman for the US Anti-Doping Agency has told the newspaper that the agency is "presently coordinating with the Athletics Integrity Unit in order to investigate these claims fully."

The Telegraph's investigation comes after the Russian Olympic team was officially banned from the upcoming PyeongChang Winter Games by the International Olympics Committee (IOC), though some athletes may participate under a neutral flag.

© Sputnik / Mihail Serbin
WADA Informant: 'I Will Destroy Russian Sports, Don't Give a F*** About Doping'
The ban was given as a result of doping allegations made against individual athletes by the former head of the country's Anti-Doping Centre Grigori Rodchenkov turned World Anti-Doping Agency (WADA) informant.

Rodchenkov, who admittedly acquired the synthetic drugs formula from the US, subsequently fled Russia and went into the FBI's witness protection program.

The critics highlighted the unusually harsh IOC decision, pointing to the fact that regular doping by US athletes has never warranted disqualification of the entire team.

Hope for 'Fair Play': Russian Anti-Doping Agency on the Way to Reinstatement