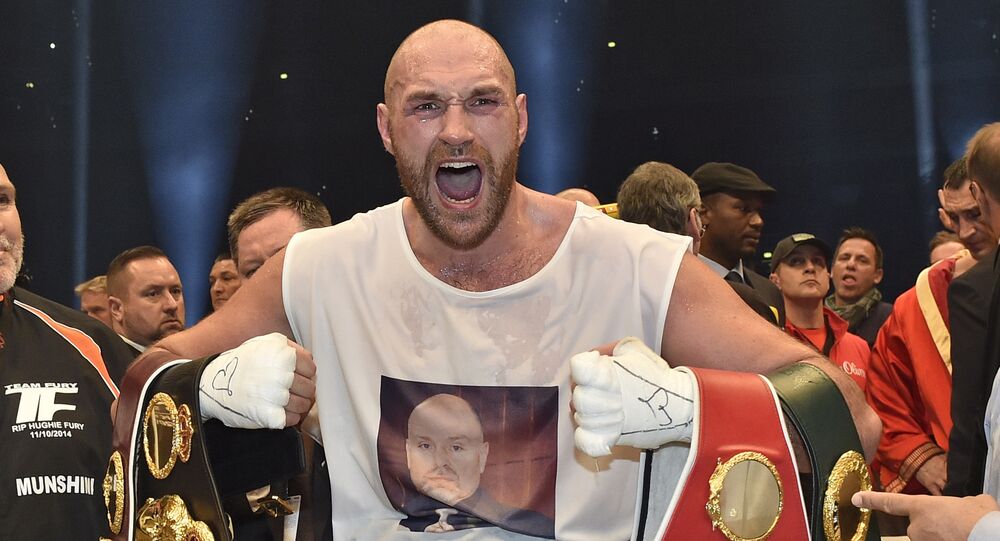 Former world heavyweight boxing champion Tyson Fury has resumed his attacks on rivals and promoters on social media after his path to regaining his license was opened by UK Anti-Doping, organization responsible for protecting British sports from performance enhancing drug use.

Fury posted a video of himself singing to the 1990s Eminem song, Without Me, but changed the lyrics to parody the British Boxing Board of Control (BBBofC) and ended with an obscene gesture and an expletive aimed at promoter Eddie Hearn.

"Tyson Fury's boxing licence suspension will be considered by the stewards of the board in January," the BBBofC board said on Wednesday, December 13.

@anthonyfjoshua where you at boy? I'm coming for you punk ent no1 blocking my path now!👊🏻

Fury and his cousin Hughie both tested for nandrolone, a banned steroid, in December 2015 but they have always denied taking it and blamed the rogue result on eating a wild boar which had not been castrated.

Wild boar is known to contain small amounts of nandrolone but the chairman of the World Anti-Doping Agency, Dick Pound, once famously denied it could trigger a positive test.

"You can eat boar's testicles all week and not reach that level," said Mr. Pound, who stepped down in 2007.

🥊 🕺 When you find out Tyson Fury is free to fight again…

​UKAD gave Fury a two-year ban but backdated it, meaning he is now clear to apply for his license next month.

Fury, 29, beat Ukrainian Wladimir Klitschko in November 2015 in a huge upset in Germany — but has not fought since.

Shortly after winning the title, Fury, who claims to be a Christian, derailed his chances of winning the coveted Sports Personality of the Year award in the UK when he made remarks placing homosexuality and abortion on a par with pedophilia.

In September 2016 he tested positive for the class A drug, and said he took it recreationally as he struggled to cope with depression.

He now claims to be on the road to full fitness and has spoken of his desire to reclaim the world titles, which are "rightfully" his.

"I'm a fighting man through and through and I've never backed down from anyone in my life and I was certainly not going to back down from fighting this dispute," said the Manchester fighter, who hails from the traveller community.

Do You Feel Lucky?

In November, Fury called Anthony Joshua, the IBF and WBA champion, a "punk" and claimed he could beat him without even training or losing weight.

Joshua defeated Klitschko earlier this year in a dramatic fight in which he himself was almost out on his feet before coming back to stop the Ukrainian, who has now retired.

The world heavyweight boxing championship picture is extremely complicated at the moment.

Joshua, who is from Watford, near London, is the IBF and WBA champion.

Parker is the WBO champion and Deontay Wilder, from the US, holds the WBC title.

Most boxing fans want to see Joshua fight Wilder but the British fighter seems wary of taking on the undefeated, heavy-hitting American.

If Fury, who is unbeaten, were to get his license back, then take on and defeat Parker, for example, it would put him in a strong position to negotiate a huge money-spinning clash with Joshua next summer.

Another option is for Fury to take on another British boxer Tony Bellew, who played "Pretty Ricky" Conlan in the 2015 Rocky-spin-off movie Creed.