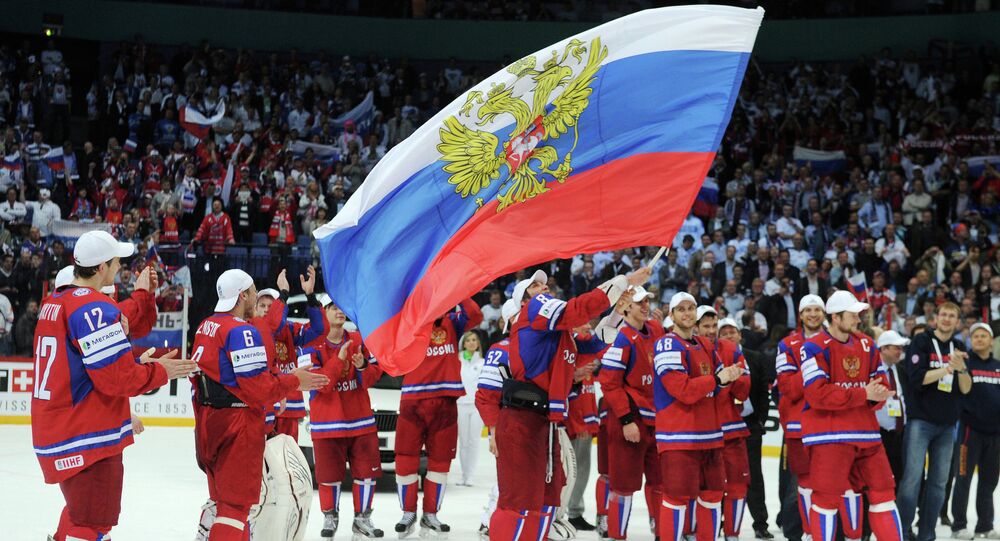 Commenting on the International Olympic Committee's scandalous decision to ban the entire Russian national team from competition at the upcoming 2018 Winter Olympics in Pyeongchang, South Korea, hockey expert and sports journalist Daniele Amadasi emphasized that the tournament just won't be the same if Russia doesn't participate.

The IOC banned Russia from taking part at the Pyeongchang Games early this week over claims of 'systematic doping manipulation.' Russian President Vladimir Putin slammed the move, saying that the Olympic body's ruling "looks like an absolutely staged and politically motivated decision."

Among the questions stemming from the loss of the winter sports superpower are those about the consequences the Russian team's absence will have on the hockey tournament. Under IOC rules, if members of Russia's hockey team compete at all, they will have to do so under the neutral Olympic flag.

With the NHL declaring earlier this year that its pro-players would not compete at the Pyeongchang Games, Russia was seen as the favorite to win the Olympic hockey competition, since the Russian Conintental Hockey League, on which the national team would draw, is widely thought of as the best in Europe.

The NHL is out of the Olympics. Now Russia and maybe players in the KHL are also out. It's actually somewhat likely a kid shooting knucklepucks in a street hockey game could be recruited to the Olympic roster.

Speaking to Sputnik about the consequences of the IOC's move, Daniele Amadasi, editor-in-chief of the popular Italian hockey publication TuttoHockey, said that Olympic hockey without Russia is unthinkable.

"Imagining an Olympic hockey tournament without Russia is akin to imagining Brazil, Germany or Spain being disqualified from the last Soccer World Cup," the sports journalist stressed. "Every year at the world championships, and at the Olympics, Russia usually either wins or makes it to the podium."

First they announce that the NHL won’t be participating in Men’s Ice Hockey for the Olympics, and now Russia is banned, 2018 is going to be a horrible year.

With this in mind, Amadasi suggested that the International Ice Hockey Federation will likely seek to "use all its available resources to prevent Russia's disqualification," even though the final decision will not be theirs to make.

"Personally for me it's absurd that a doping scandal affecting only individual athletes has gone on to hit the entire Russian sports movement, including 'clean' athletes. And all of this is taking place under the banner of an absurd, modern-day witch-hunt," the journalist added.

"If Russian athletes do compete, and compete under a neutral flag, it will add special importance to the ice hockey competition. It would serve as a kind of political compromise which has nothing to do with sports," Amadasi concluded.

© Sputnik / Alexey Kudenko
2017 IIHF World Championship. Russia vs. Czech Republic
© Sputnik / Vitaly Podvitski
No Russian
In his remarks regarding the IOC's decision on Wednesday, President Putin confirmed that Russia would not issue a boycott of the Pyeongchang Games, and that individual athletes would be free to make up their own minds on whether or not to participate.

Under current world rankings, the Russian hockey team is second, behind Canada. After the collapse of the Soviet Union (which dominated world hockey for nearly forty years) in 1991, Russia has won the title of world champion five times (the last time in 2014). At the Olympics, Russia won silver at Nagano in 1998, and bronze at Salt Lake City in 2002. In 1992 in Albertville, Russian athletes played under the Olympic flag together with a unified team from the former USSR, taking home the hockey gold.

Without a #Russia hockey team in the #Olympics #Canada has no one worth playing! #LetRussiaPlay #NoRussiaNoGames

Remember the last time Russia/Soviets didn't play in the Olympics, they won the gold in hockey as the Unified Team.