MOSCOW (Sputnik) — The International Olympic Committee has disqualified five Russian athletes over anti-doping rules violations allegedly discovered in the course of the probe into Sochi 2014 games and banned them from all subsequent Olympic Games, the IOC said in a statement.

"The IOC Disciplinary Commission, composed for these five cases of Mr Denis Oswald (Chair), Mrs Gunilla Lindberg and Mr Tony Estanguet, decided the following: Sergei Chudinov, Aleksei Negodailo, Dmitrii Trunenkov, Yana Romanova and Olga Vilukhina are found to have committed anti-doping rule violations pursuant to Article 2 of The International Olympic Committee Anti-Doping Rules applicable to the XXII Olympic Winter Games in Sochi, in 2014, and are disqualified from the events in which they participated," the statement read. 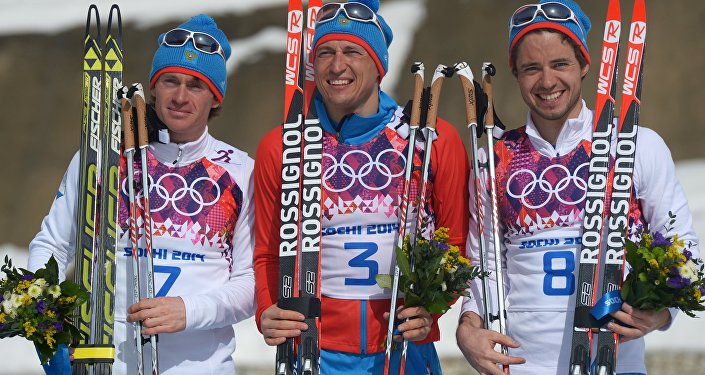 © Sputnik / Evgeny Biyatov
#NoRussiaNoGames: Internet Rushes to Defense of Russian Athletes' Honor Amid IOC Doping Claims
Bobsledders Negodailo and Trunenko were stripped of their Sochi gold medals prior to the decision of their disqualification. Biathletes Romanova and Vilukhina won silver in 2014 as part of the team, while Vilukhina had a personal silver medal as well. Chudinov, a skeleton athlete, was fifth at Sochi games.

IOC also said in its press release later that available evidence shows that samples collected from Russian athletes at the 2014 Winter Olympic Games in Sochi could be opened without leaving marks on them,

"Regarding samples which were not found with T marks or only with isolated T-marks, no firm conclusion can be drawn. However, other available evidence effectively establishes that samples could be opened without leaving marks or only single T-Marks. Prof. Champod confirmed that this was possible," a paper on reasoning for the decision on Russian skier Alexander Legkov read.

In the paper, "T-marks" stand for tool marks as classified by professor of Criminology at the University of Lausanne Christophe Champod, who was appointed by the IOC as an expert to perform a forensic analysis of the bottles.