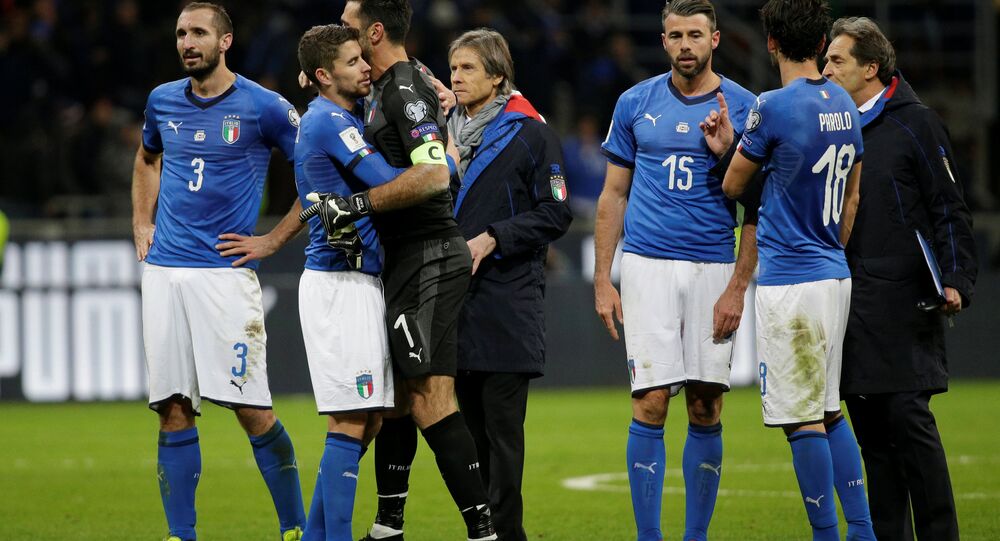 Only 32 teams can compete in the 2018 World Cup finals - but while many perennial losers won't be traveling to Russia for the tournament, some of the contest's most famous names and faces won't be either.

After 18 months of gruelling qualifying matches across the globe, the teams that will vie in the 2018 World Cup in Russia has finally been decided.

The greatest football competition on earth truly will be a "world" cup, with teams from Europe, Central and South America, Africa and Asia all having qualified for the tournament — however, several countries didn't make the final 32, among them some of international football's finest.

Italy said goodbye to some legends after they failed to reach the World Cup 💔 pic.twitter.com/iulx2rsG4j

​The country is one world cup victory removed from the tournament's most successful national team, Brazil, and tied with Germany in second place — and 2018 will be only the second time Italy has not sent a squad to the contest.

However, while Italy evidently has an esteemed football past, in recent years the country standing has slipped significantly — the country didn't make it past the group stage in the 2010 or 2014 Cup, in the former instance finishing without a single win despite being defending champions. Their appearance in the Euro 2012 final was widely perceived to be a surprise, and attributable to luck rather than playing nous.

Less shocking but still notable was the Netherlands' failure — the country was a World Cup finalist in 1974, 1978 and 2010, and its training and development of young footballers is world renowned. In 2010, their loss in the final — to Spain — only came in extra time, too.

No Italy. No Chile. No Netherlands. No USA. Maybe it’s time to consider a 48 team World Cup….oh wait a minute.

​Nonetheless, the loss comes hot on the heels of their failure to qualify for Euro 2016, when the Dutch finished fourth place in their qualification group. Like Italy, the team's failure may be attributable to its average age — its leading players, such as Arjen Robben, Wesley Sneijder and Robin van Persie are all arguably past their prime.

Still, the country's youth teams aren't faring much better — its U21s last won the European Championships in 2007, and didn't qualify in four of the last five finals.

Elsewhere, Cameroon — Africa's most successful World Cup nation — likewise didn't make it through. The country has played at seven World Cups, and in 1990 became the first African team to reach the quarter-finals.

When Italy, Netherlands, Chile, USA, Ghana & Cameroon miss the World Cup, that suggests more countries are getting better at the sport. That in itself is not a bad thing.

​The country's failure is doubly surprising given it won the African Cup of Nations for the fifth time in February — although this is attributable to Africa's extremely challenging qualifying system. In all, 53 countries compete, the most sides fielded by any continent — and only five teams can qualify for the final tournament. In Cameroon's qualifying group, the country was narrowly beaten by Nigeria and Zambia, precluding its team from the finals.

The US last missed the World Cup in 1986, and have played in the finals since 1990 — but in 2018, its squad has been relegated to watching proceedings on television, from the comfort of their presumably palatial homes, after an embarrassing defeat by Trinidad and Tobago.

US to lead ‘losers’ tournament for Teams who failed to qualify for world cup https://t.co/z8bPGOEWb5 pic.twitter.com/GZuKIpCB6x

​The US' failure to make the grade is doubly shocking given the team won the Confederation of North, Central American and Caribbean Association Football Gold Cup for the sixth time in July, and entered the tournament with a 14-strong unbeaten match streak, the best pre-Cup start ever enjoyed by the squad.

However, the US Soccer Federation isn't taking its failure lying down — instead, officials are exploring the idea of a tournament for countries that didn't qualify. On top of those who will miss the 2018 contest, such a tournament could even see Laos, Kazakhstan and Latvia compete — teams that have never qualified for a World Cup.

Whether FIFA would allow exhibition games to be held during the World Cup isn't clear — and in any event, the Association announced in January it would be expanding the number of teams that could compete to 48 from 2026.