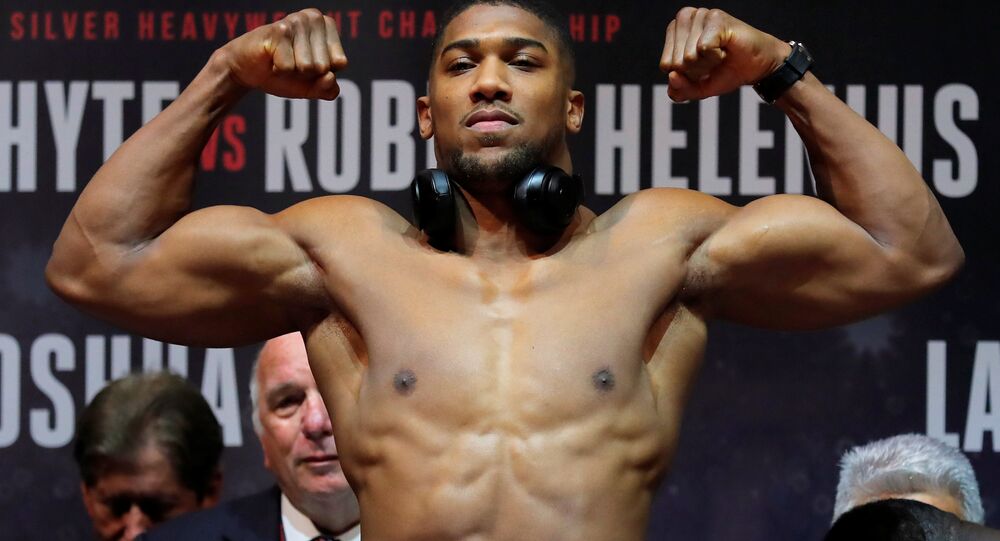 Anthony "AJ" Joshua, who holds the WBA and IBF world heavyweight titles, is defending both belts again in Cardiff on Saturday, October 28, against the lightly-regarded Frenchman, Carlos Takam, who was knocked out by Russia's Alexander Povetkin in 2014.

But there are two other world heavyweight champions who have their own title belts.

Great to catch up with those who stayed out to see me after my workout, thanks for your time! 🙌🏾🙏🏾🙌🏾 pic.twitter.com/PPEgswv4P0

Boxing fan Cody Lachey said he felt the sport would be more popular if people knew clearly who the one world champion was in each weight class.

"For me there are too many belts in boxing, but one thing as a boxing fan that is for sure, when these huge unification fights are made, it's win-win for all concerned, but frustratingly politics stops these huge fights being made," Mr. Lachey told Sputnik.

"The promoters try their best to bring big unification fights but some fighters try to dodge fights they know they can't win or price themselves out of a fight or the fighters' management turn down the fights, but there's a lot of politics in boxing that seems to stop these huge unification fights being made. It's sad to see. Fighters should take on all comers," he added.

I love how Carlos Takam is using a translator. He actually speaks perfect English 😂😂😂😂😂😂😂 One way to take pressure off media commitments.

Takam, who has lost three times, is a late substitute for the Bulgarian Kubrat Pulev, who pulled out of the fight earlier this month with a shoulder injury.

But despite huge interest in Joshua among British boxing fans — the ticket-only weigh-in on Friday, October 27, was sold-out — the contest with Takam does not excite the wider world.

The fight most boxing fans want to see is Joshua up against Deontay "The Bronze Bomber" Wilder, the unbeaten US fighter who holds the WBC crown.

Wilder fights next on Saturday, November 4, against Canada's Bermaine Stiverne, a man he has already beaten once.

Stiverne has not been in the ring since 2015, and Wilder is so confident of winning the fight in New York he has said he will retire if he loses.

Boxing fan Cody Lachey said Joshua's promoter Eddie Hearn seemed to be keen to make a fight between Wilder and Londoner Dillian Whyte — whose only defeat was to AJ — and then do a "huge unification fight" with Joshua.

"Wilder wants US$7million for the Whyte fight. I feel that Wilder will only fight AJ if it's ordered by the governing body of Wilder's belt but for me AJ would defeat Wilder," Mr. Lachey told Sputnik.

Then there is a third world champion — Joseph Parker from New Zealand, who defeated Britain's Hughie Fury last month for the WBO title.

Plan to Fight Japanese 'Nobody'

Parker has been eyeing up a Japanese boxer as his next challenger.

His promoters have been negotiating with Kyotaro Fujimoto who, although unbeaten, is unheard of outside of Japan, and is ranked only ninth by the WBO and unranked by the other three sanctioning bodies.

The WBO do not even have Joshua or Wilder in their top 10 heavyweight rankings.

In the 1940s, 50s, 60s and 70s the name of the undisputed world heavyweight champion — people like Rocky Marciano, Floyd Patterson, Muhammad Ali and George Foreman — were known by pretty much everyone. But in 1978, the title began to fragment.

Mike Tyson reunified the title in 1987, but the last undisputed world heavyweight champion was Lennox Lewis in 2000.

Joshua himself insists he is not to blame for the lack of an undisputed champion.

'Diamond in the Dirt'

He said on Friday, the idea of unifying the title was a "great challenge."

"We will find a way to make it happen," he said, although it would be difficult to satisfy all four governing bodies — the WBA, WBC, IBF and WBC, all of whom received significant fees for sanctioning, or agreeing to fights.

"It's like a diamond in the dirt, the treasure, trying to get that pot of gold at the end of the rainbow," Joshua told the BBC.