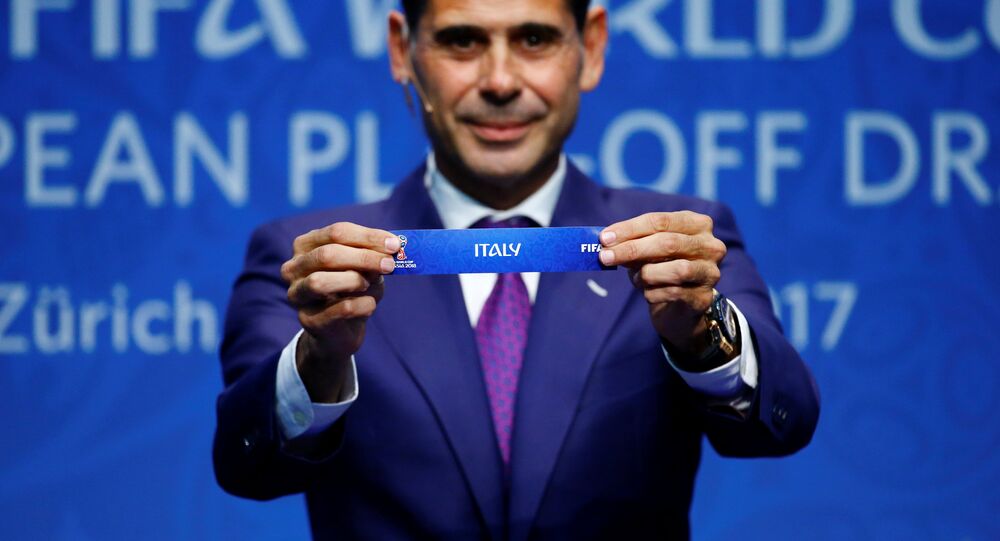 Italy, who have won the World Cup four times, will have to defeat Sweden in order to make it to next year's tournament in Russia. If they fail to qualify it would be the first time since 1958.

One of the world's best footballing nations will have to defeat Sweden, who pipped Holland to second place in their group, if they are to make it to the 2018 World Cup in Russia.

They were drawn together in one of four European play-off matches, after a draw at FIFA's headquarters in Zurich on Tuesday, October 17.

They are now within 180 minutes of missing out on the game's biggest spectacle.

They must overcome the Swedes, who were runners-up to France in their group, over two legs in November.

Several other big nations have missed out — China and the United States — but neither are footballing superpowers like Italy.

💯Which trio have never lost a #WCQ play-off tie?
👶Who are making their debut?
😨Which has a record of 1 win in 4?

The pick of the three other play-off games was tiny Northern Ireland taking on Switzerland.

Northern Ireland, who have only played in one World Cup before — ironically the one Italy missed, did well at last year's European championships and came second in their group behind Germany.

"The most important thing is we don't concede an away goal. We'll be prepared for Belfast. We've only lost one game there in four years," said Northern Ireland's manager Michael O'Neill.

"We knew it was going to be difficult. They've had a good campaign, but we have a big opportunity to get to Russia. We know we'll have to be at our best but we believe we're good enough to do that," he said.

Their cousins across the border, the Republic of Ireland, will have to beat Denmark to make it to Russia.

They beat Wales in the final group game to reach the play-offs instead of the Welshmen, while the Danes finished behind Poland in their group.

"Naturally, we're just pleased to be in the draw. Being unseeded means it was always going to be a difficult tie," said Ireland manager Martin O'Neill.

"If you ask most coaches, you want the second game at home. But with the rules like extra time, it gives the away team that chance to score in 120 minutes. We have momentum and that's important," he added.

In the same weeks in November, there will be play-offs between Honduras and Australia, and Peru and New Zealand for the final spots at the World Cup.

The chief executive of New Zealand Football, Andy Martin, has urged fans in Wellington to create a hostile reception for the Peruvians.

He said the Kiwi players expected a noisy and hostile welcome in Lima for the second leg and urged New Zealanders to let the Peruvians know they are "coming into a battle."