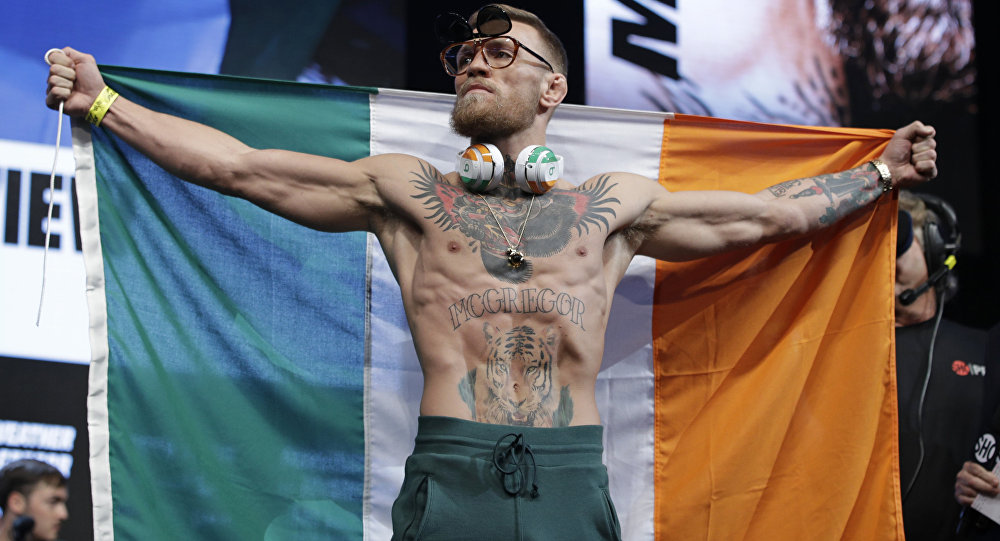 Conor McGregor is set to return to MMA with a fight before Christmas, despite sparring partner Paulie Malignaggi claiming he was lining up a boxing match. McGregor may fight Tony Ferguson, who has dubbed him "McNuggets."

Conor McGregor, who earned a fortune for his fight with Floyd Mayweather in August, is likely to pick Tony Ferguson over other options, which include his former boxing sparring partner Paulie Malignaggi, Australian boxer Jeff Horn and MMA veteran Nate Diaz.

McGregor seems content to retire from boxing with a ring record of 0-1 and return to the world of MMA.

McGregor and Diaz have fought twice before with the Irishman avenging his first ever loss last year.

MMA expert Sal Mannan said Ferguson would seem to be the perfect opponent for McGregor.

"Tony Ferguson scorched his way through a 10 fight win streak that has earned him the UFC's interim lightweight belt. McGregor is yet to defend the belt he captured 12 months ago," Mannan told Sputnik.

"Although there are better paydays in boxing with Paulie Malignaggi and a possible third UFC fight with Nate Diaz, a fight with Ferguson will look appealing as contender Kevin Lee, with limited boxing skills, was able to expose Ferguson's chin on numerous occasions," Mannan told Sputnik.

"Ferguson himself admitted last week McNuggets' boxing skills would need to be neutralized by wrestling, should they meet in a possible end of year event in Las Vegas," he told Sputnik.

A Twitter spat between McGregor and Ferguson has already kicked off, with both sides tweeting about each other.

Ferguson was made the UFC interim lightweight champion when McGregor went off on his boxing adventure, and the American has been urging the Irishman to give up his own belt or defend it against him.

McGregor and Ferguson are now expected to square off in December or January, although no venue has been decided.

In the run-up to his mega-millions "circus" fight with Mayweather, which he lost in the 10th round, McGregor sparred with Paulie Malignaggi, who has been talking up a possible bout with the Irishman.

The New Yorker quit sparring a few weeks before the fight, claiming McGregor's corner had misrepresented him as having been knocked down by the Dubliner's power.

Malignaggi, 36, had retired but in recent days he has claimed his adviser, Al Haymon, "reached out" to Dana White and suggested a grudge fight with McGregor in the boxing ring.

"Al Haymon makes anything he wants to happen, happen. Once I spoke to Al and he told me they wanted to make this fight, I knew that the only was this fight doesn't happen is if Conor has no balls, which wouldn't surprise me! This fight is bigger than anything else he has, there's no more Mayweather fights," Malignaggi said on Friday, October 13.

"For a new father yet to turn 30, McGregor remains in the enviable position to determine his destiny to greater glory and riches," Mannan told Sputnik.

Mayweather vs McGregor Was a Boxing 'Carnival,' Get Ready For a 'Proper Fight'