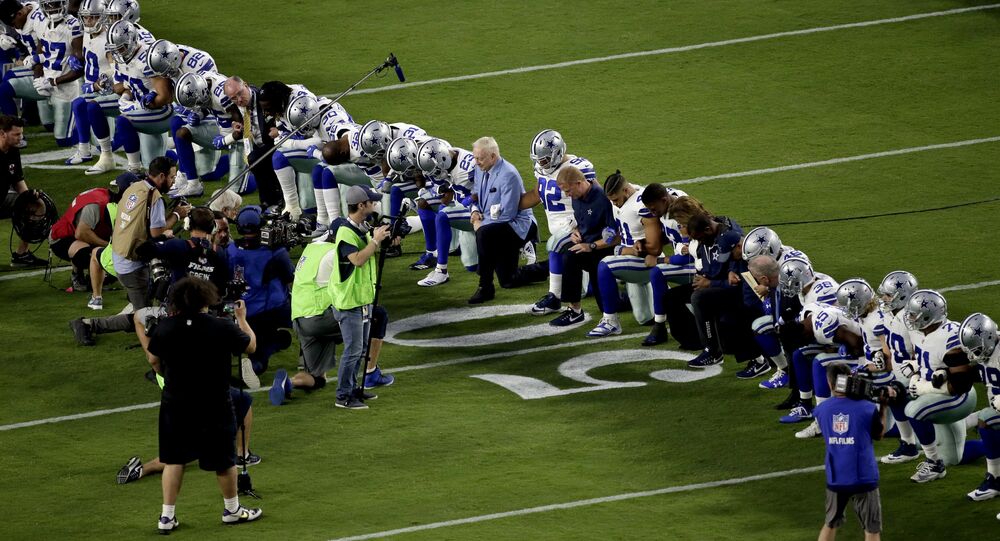 President Donald Trump's Twitter war with the NFL and the NBA over their alleged lack of patriotism is all the rage, but isn't the first time that pro athletes have used their positions to attract attention to political and social issues. Sputnik looks back at the loudest, proudest, and most controversial political protests in sports history.

Trump's feud with pro-athletes has joined North Korea, Iran, John McCain and health care in the news cycle among people, things or countries the president has a problem with, garnering more and more media attention as football and basketball superstars hit back against his argument that athletes who kneel during the national anthem to protest racial injustice are unpatriotic.

© AP Photo / Eric Risberg
Batter Up: First US Baseball Player Joins American Football Protests
But the politician-pro athlete spat epitomized by the president and the sports stars today is nothing new, and goes back at least a century.

Peter O'Connor and the Irish Flag

One of the first athletes to use professional sports as a platform to spread his political message was Peter O'Connor, an Irish track and field athlete wanted to represent a free Ireland, not the United Kingdom, at the 1906 Olympics.

After winning silver in the long jump competition, the Irishman ended up scaling the flagpole during the flag-raising ceremony, waving the Irish flag as fellow athlete Con Leahy guarded the pole, fighting off enraged officials at the bottom.

O'Connor would continue protesting for independence through sport. In 1908, both he and Leahy boycotted the London Olympics due to the UK's refusal to grant Ireland independence.

Jesse Owens and the 1936 Berlin Olympics

The 1936 Berlin Olympics, organized under the Nazis, were meant to be a keystone of Nazi propaganda, demonstrating Aryan racial superiority to the world through sport. Despite broad calls by anti-fascist activists to boycott the games, no country refused to participate. James Cleveland "Jesse" Owens, US track and field athlete and well-known equal rights advocate, originally planned to boycott the games, but would end up participating due to pressure by US officials.

During the games, German security forces were informed that activists were sending out letters to athletes about the persecution of minorities in Germany. Owens was meant to receive such a letter, which was to ask him to renounce his medals and deliver a speech denouncing the Nazi regime. Unfortunately, the Gestapo intercepted it.

© AFP 2020 / CORR/HO
US champion "Jesse" (James Cleveland) Owens is airborne during the long jump event, that he won, 09 August 1936 during Olympic Games in Berlin. (File)

1947 became a turning point in American baseball. In the mid-1940s, Brooklyn Dodgers manager Branch Rickey started scouting for players among African Americans, settling on Jackie Robinson and drafting him into the team in 1947. The move became something of a breakthrough for the civil rights movement. Following Robinson's breakthrough, nearly a dozen other African Americans would join major league baseball, with hundreds more to follow in the decades since.

Muhammed Ali vs. the Vietnam War

The persecution of legendary boxer Muhammed Ali began with his pacifist statements about the Vietnam War, including remarks that he had "no quarrel" with the Vietcong militia after it was revealed that he might be drafted. "Why should they ask me to put on a uniform and go ten thousand miles from home and drop bombs and bullets on brown people in Vietnam while so-called Negro people in Louisville are treated like dogs and denied simple human rights?" he asked, in a 1967 press conference that made headlines around the world.

© REUTERS / Eduardo Munoz
A Tweet Too Far: Twitter Explodes Over Trump's Feud With 'Unpatriotic' Athletes
Ali's stance resulted in intense monitoring by the FBI and the NSA, difficulties in setting up fights, and intense criticism from those who denounced the heavyweight champion as 'unpatriotic'. For his pacifist stance, Ali received a five year prison sentence (which he was able to avoid serving thanks to his lawyers), fined $10,000 and banned from boxing for three years.
© AFP 2020 / CONSOLIDATED NEWS PICTURES
Heavyweight world boxing champion Muhammad Ali is seen during a training session on April 23, 1976 in Washington before his heavyweight world championship fight against Jimmy Young on April 30, 1976 in Landover, Maryland. (File)

The 1968 John Carlos and Tommie Smith Black Power salute at the summer Olympics in Mexico City would go down in history as one of the most memorable events in the history of athlete protests. Winning gold and bronze for the 200 meters, the runners defiantly raised gloved fists in the air on the podium during the US national anthem in support of African American and workers' rights. Reaction was swift. The runners were expelled from the team, put on a plane and sent home. Back in the US, they were subject to intense criticism, their families even receiving death threats.

Following the 9/11 terror attacks, pro-football star Pat Tillman decided to give up his well-paid job in sports to go fight for his country. Conducting several tours as an Army Ranger in Iraq, Tillman was sent to Afghanistan. There, on April 22, 2004, he was killed in a friendly fire incident. The real cause of Tillman's death remains a mystery. During his service, his views evolved, and he became opposed to President Bush's wars, especially the invasion of Iraq. Some, including his mother, have since speculated that he may have been murdered for his views.

Amid public outrage over the death of Eric Garner, a New York man killed by police after being put in a chokehold in 2014, several major NBA stars including LeBron James, Kyrie Irving, Kevin Garnett appeared in public in 'I Can't Breathe' t-shirts, which were Garner's last words prior to his death. NFL players and players from college basketball teams joined them.

In that same turbulent year, taking up a slogan and gesture that originated after the August 2014 police shooting of Ferguson, Missouri resident Michael Brown, members of the Los Angeles Rams football team came onto the field making the gesture during a game in late 2014. The NFL did not sanction the players in any way, instead saying that the players had a right to free speech. In today's confrontation between Trump and the pro-sports stars, many officials and athletes are making the same argument, even if they don't openly support the players who take a knee during the anthem.