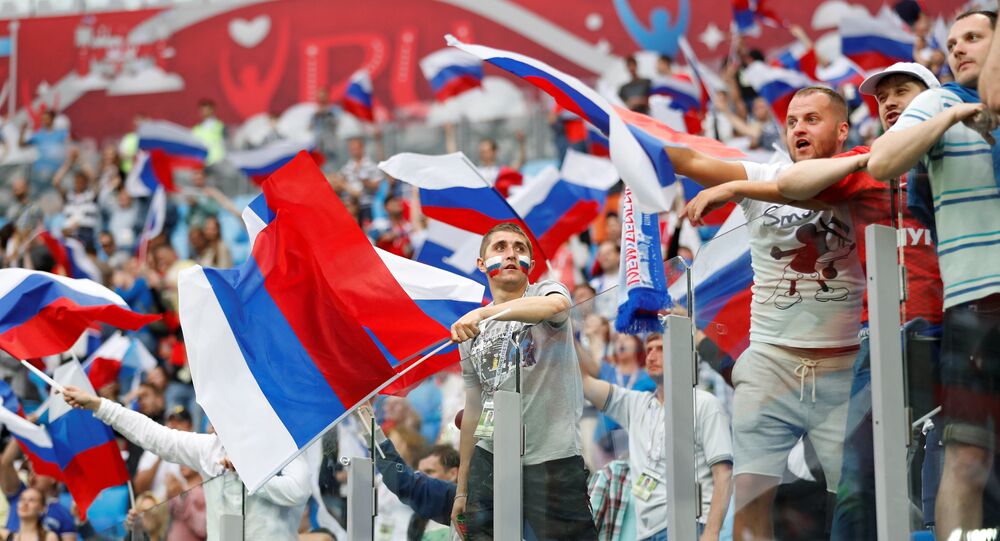 Russian football fans are preparing to greet fans of Liverpool and Manchester United who come to Moscow at a special welcoming event.

Fans of Russia's Spartak and CSKA football clubs will conduct a Gentlefan welcoming event for their UK counterparts who come to Moscow to watch UEFA Champions league group stage matches, according to the Russian Football Union website.

On September 26, Spartak Football Academy students will give their Liverpool fans custom red t-shirts decorated with a timeline of the two clubs' matches. There have been four of them so far, and both teams have scored two victories each.

© Sputnik / Vitaliy Timkiv
#Gentlefan: Russian Football Fans Treat Ivory Cost Guests With Warm Tea
The next day, September 27, students at the CSKA football school and the club's fans will host a party for Manchester United fans. The guests are to be given custom-designed raincoats.

Overall, some 1,145 UK fans are expected to come to Moscow to watch Champions league matches.

The matches between the Russian and British clubs will take place on the same dates as the greeting events: Spartak will meet Liverpool on September 26, and Manchester United will face CSKA on September 27.

The so-called Gentlefan events were first been hosted earlier this February, when Rostov football club fans greeted their Manchester United counterparts with warm blankets to keep guests comfortable in the open tribunes of Olymp-2 stadium in Rostov-on-Don.

The tradition continued during the Russia vs Cote d'Ivoire national team match in Krasnodar, which involved some 200 foreign guests who were offered hot tea from a giant samovar; during Russia vs Belgium in Sochi, when girls dressed as angels presented guests with cloud-shaped pillows; and during Russia vs Chile in Moscow, where guests were presented with various gifts and souvenirs.