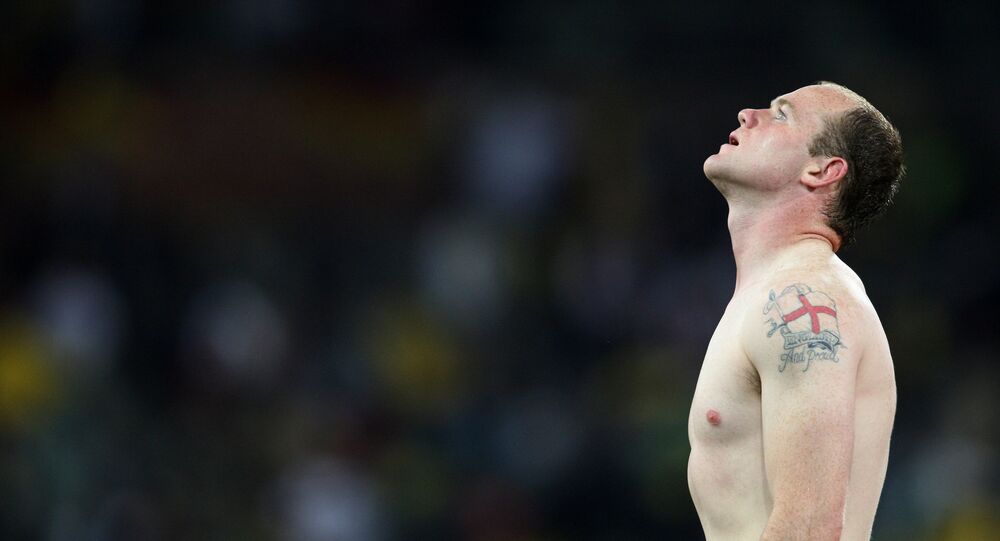 England's all-time record goal scorer, Wayne Rooney, has been charged with drink-driving near his home in Cheshire. Sputnik looks at footballers who have been caught up in allegations of drinking or drug taking.

Rooney, who rejoined Everton from Manchester United this summer, was arrested near his home in Cheshire after spending the evening at a bar in Alderley Edge. He has been bailed until a court hearing later in the year.

The Argentinian was possibly the greatest footballer who ever lived, but his personal life was a bit of a mess and his drug habits spiraled out of control at the height of his fame.

His problems with cocaine materialized as early as 1982, when he joined Barcelona at the tender age of 22.

Two years later he joined Napoli in Italy, where he partied hard and was fined $70,000 for missing training and games.

In 1991, the "Mozart of football" tested positive for cocaine.

​Three years later he scored in Argentina's first World Cup group match and ran up to the TV cameras like a man possessed, with mad, staring eyes.

A few days later ephedrine was found in his system and he was thrown out of the tournament and declared his "soul was broken."

In the late 1980s Arsenal were a very different club to what they are now.

Today's squad of health-conscious and mainly foreign athletes contrasts greatly to the team of largely English players who won the league under manager George Graham.

The Gunners — one of London's top clubs — had a massive drinking culture and at the center of it was their captain, England international defender Tony Adams.

​But his battle with alcoholism made front page news in May 1990 when he crashed his car into a wall in Essex and was later jailed for four months for driving with four times the legal alcohol limit.

He came out of prison, gave up booze, wrote a critically acclaimed autobiography, Addicted, followed by the book Sober, and led Arsenal to the Premier League title again in 1998 and 2002.

Best was certainly the best footballer ever to be produced by Northern Ireland and one of the best players never to play in a World Cup.

During the late 1980s and early 1970s he managed to combine his "champagne Charlie" lifestyle with bravura performances for Manchester United, winning the league and the European Cup.

But in 1974 United were relegated and Best, still only 28, began a nomadic life playing episodically for clubs as far afield as London, Edinburgh, the United States and South Africa.

© AP Photo
Former Manchester United and Northern Ireland footballer George Best sits on the beach at Marbella, Spain, May 25, 1972, after announcing his retirement from football.

By the 1980s he was an alcoholic, and in 1984 he was jailed for three months for drink driving and assaulting a police officer.

In 2002 he received a liver transplant, but he died three years later and was given a hero's funeral in Belfast, which later named one of its airports after him.

Another footballing legend who was blessed with talent but was also an acutely flawed character.

Hi hope alls well I'm looking forward 2 the match sorry2the scots and to Colin Henry for me it was play ground stuff pic.twitter.com/t6d5naKUaz

​Gazza, as he is still known, broke into the team in his native Newcastle as a teenager and was soon a star performer in their midfield.

He was snapped up by Tottenham in 1988 but his career began to go awry when he moved to Italy and signed with Lazio, of Rome.

But he remained a star turn for England and after he scored a phenomenal solo goal against Scotland in the Euro 96 tournament and his celebration owed a nod to a wild and drunken night out the team had had in Hong Kong a few months before.

In 2002, after leaving Everton, Gascoigne's career and his personal life gradually fell to pieces and since then his life has been a sad saga of alcoholic escapades, which usually find their way into the British tabloids.

The second greatest player to come out of Brazil, after Pele, Garrincha helped his country win the 1958 and 1962 World Cups.

'Which player made you love football?'
We give you a random #top80:

​But aside from football, his greatest passions were alcohol and women.

"The Little Bird," as he was nicknamed, was involved in numerous drunken car crashes and eventually died of a liver disease in 1983, leaving behind at least 14 children from various relationships.

When he burst onto the scene in 2006, Artem Milevskiy was tipped as fit to follow in the footsteps of the Ukraine's greatest footballer, Andrey Shevchenko.

But the deal fell through and by 2012 his form had dried up.

He continued to party hard and ply his trade with Dynamo Kiev and in 2013 he ended up joining an obscure Turkish club, Gaziantepspor.

While there wrote-off his Ferrari California and was found to be over the drink-drive limit.

In July this year Milevskiy, still only 31, signed for an obscure club in Belarus.

The Romanian striker Adrian Mutu was banned for seven months after testing positive for cocaine while playing for Chelsea in 2003.

Mutu bounced back, playing for a number of top clubs in Italy and last year, the extremely wealthy 37-year-old married a former Miss Romania, Sandra Bachici, 22.

GOAL! This Referee Should Have Been a Footballer Instead