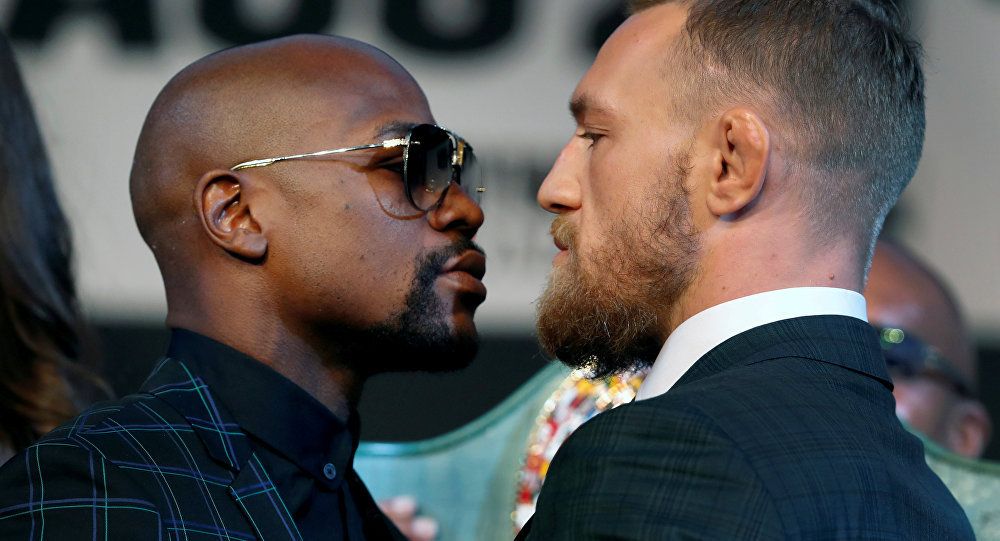 Roll Up, Roll Up! Will Mayweather v McGregor Be as Memorable as These Fights?

On Saturday night, August 26, the unbeaten boxer Floyd Mayweather will take on UFC fighter Conor McGregor in one of the most eagerly awaited fights in boxing history. Although it has been dismissed as a "circus" by many boxing purists, Sputnik takes a look at where the bout ranks among the greatest clashes in the ring.

The bout between Mayweather, who is considered the best pound-for-pound boxer this century, and the brash Irish mixed martials art fighter, is expected to make more money than other fight in history, with up to US$700 million being generated worldwide by the pay-per-view TV rights.

But boxing has seen many huge fights over the years, many of which were set against political and racial divides.

In 1910, black people were still being regularly lynched across the United States by racist mobs and white America's attitude towards Jack Johnson, the first African-American world heavyweight champion, was one of barely-contained disgust.

Johnson, aka The Galveston Giant, had a succession of white girlfriends and reveled in the hostility of the crowds.

Johnson toyed with his opponent before finally stopping him in the 14th round.

The result led to race riots and dozens of deaths in cities across the US.

In June 1938, Joe Louis, whose nickname was "The Brown Bomber," was the heavyweight champion of the world and his challenger was the only man who had ever beaten him, Germany's Max Schmeling.

Schmeling, whose own nickname was the not-terribly-catchy "Black Uhlan of the Rhine" had been proclaimed by Adolf Hitler and the Nazi regime as a national hero.

© AP Photo /
Max Schmeling, left, German challenger, sinking to the canvas to escape the relentless hail of blows from US heavyweight champion Joe Louis, right, that drove him to dismal failure in sensational fashion at the Yankee stadium in New York, United States on June 30, 1938.

The German was not a Nazi and had refused to fire his Jewish manager, Joe Jacobs.

"I am a fighter, not a politician. I am no superman in any way," Schmeling said once, in a reference to Hitler's crazy ideas about an Aryan master race.

Around 100,000 people packed into Yankee Stadium in New York for the fight, which Louis won with a first round knockout.

Schmeling, who was shunned by Hitler on his return to Germany, later served as a paratrooper during the war and was injured in the battle for Crete.

Cassius Clay, as he was then known, was the Olympic champion but was considered no match for the terrifying heavyweight champion Sonny Liston.

Liston, a glowering ex-convict who had won the title by pulverizing champion Floyd Patterson, was considered almost unbeatable.

In February 1964 their first fight, in Florida, ended in controversy when Liston retired with an injured shoulder.

The rematch, in the tiny town of Lewiston, Maine, took place in May 1965.

By then, Clay had converted to Islam and changed his name to Muhammad Ali, although Liston and most Americans still referred to him as Clay.

Again he was the underdog but in the first round he knocked out Liston with a "phantom punch."

One of the most famous photographs of Ali, who died last year, shows him standing over the prone Liston as if pleading with him to get up. 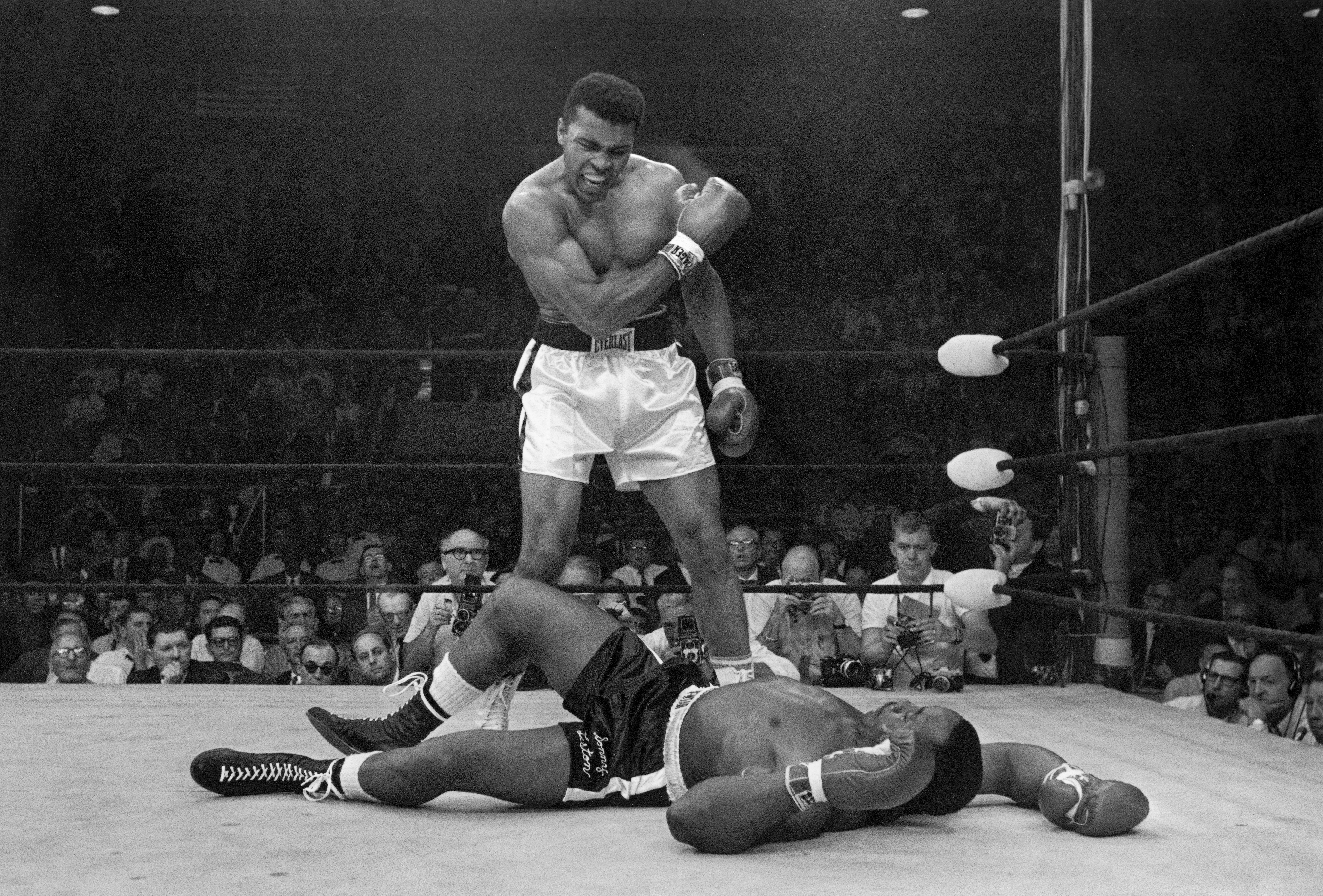 © AP Photo / John Rooney
In this May 25, 1965 file photo, heavyweight champion Muhammad Ali stands over fallen challenger Sonny Liston, shouting and gesturing shortly after dropping Liston with a short hard right to the jaw, in Lewiston, Maine. The bout lasted only one minute into the first round. Ali is the only man ever to win the world heavyweight boxing championship three times.

Boxing historians have argued for the past 50 years about whether it was a genuine knockout or whether Liston, who had mafia connections, threw the fight.

By 1974 Ali had lost unblemished record in the ring — with defeats to Joe Frazier and Ken Norton — and was again considered the underdog when he took on another formidable champion, George Foreman.

But this was no ordinary fight.

Promoter Don King, a convicted killer and former racketeer from the mean streets of Cleveland, Ohio, had managed to pull off a sensational coup by persuading the dictator of Zaire, Mobutu Sese Seko, to stump up a huge fee to stage the fight in his capital, Kinshasa.

King billed it as the "Rumble in the Jungle" and the African setting came at a time of growing black consciousness in the United States.

Ali became the Zairean crowd's favorite while Foreman antagonized them by bringing his pet Alsatian dogs, the same breed which had been used by the brutal forces of colonial Belgium prior to independence.

Foreman battered Ali for the first seven rounds but the challenger soaked it up with his "rope-a-dope" strategy and then came on strong in the eighth, knocking out Foreman and shocking the boxing world once again.

[Tweet: "Humility is the best example we can give children and motivate them to strive for their dreams"]

The rematch, in New Orleans in November, was one of the most eagerly anticipated fights in middleweight history.

Leonard was famous for his slippery, defensive style — somewhat similar to Mayweather's — and he was coasting to a points victory over Duran, who preferred brawling to boxing.

With only a few seconds left in the eighth round Duran, who spoke no English, suddenly told the referee: "No mas (no more)," and sensationally quit.

For years it was assumed Duran was quitting in protest at Leonard's style.

But in 2016, Duran gave an interview in which he admitted the real reason.

"I beat Leonard, and then I got really fat. I had to lose too much weight, I got cramps… I didn't have strength for anything," said Duran, who blamed his manager Carlos Eleta, who died in 2013, for not giving him enough time to prepare for the fight.

He even denied having said "No mas" and claimed he actually said "No sigo", meaning "I will stop now."

In the early 1990s there were three great middleweights in Britain and huge crowds came out to witness the fights between them.

Press commentary in #LasVegas for #MayweaterMcGregor 2 days to go… pic.twitter.com/KJAX1d2UGN

In November 1990, Chris Eubank, an unbeaten fighter from Brighton with eccentric mannerisms, knocked out Nigel Benn, a brutal ex-soldier whose nickname was "The Dark Destroyer."

The following year Eubank defeated Michael Watson in one of the most brutal fights ever seen in a British boxing ring. Watson was rushed to hospital, went into a coma and although he survived his career was over and he suffered permanent brain injuries from which he has never fully recovered.

The consequences of that fight seemed to affect Eubank who lost the ability to finish off opponents from then on.

But in 1993 he took on Benn again, this time at Manchester United's Old Trafford stadium.

Benn had rebuilt his career with some magnificent victories in the United States and the bout was considered a 50/50 fight.

A huge TV audience tuned in to watch a fight, which ended in a draw, although many viewers believed Benn edged it.

Eubank's son, Chris, and Benn's son, Conor, are both boxers.

He came out of prison in 1995 — after serving three years for a rape he has always denied — and the following year challenged Evander Holyfield for the world heavyweight title.

Tyson lost the first fight, but they signed for a rematch in Las Vegas in June 1997. The fight would go down in history for one of the most shocking endings ever seen.

Frustrated at his inability to land punches on the wily Holyfield, Tyson chewed a huge chunk out of his opponent's left ear, forcing referee Mills Lane with no option but to disqualify him.

Tyson was banned for a year but would fight again for a world title, losing in 2002 to Lennox Lewis.

He recently said he thought McGregor was "going to get killed" when he fights Mayweather.

In 1906, before fights were made a maximum of 15 rounds (later shortened to 12 rounds) boxers would sometimes fight for hours before a victor was declared. In September of that year it took 42 rounds before Joe Gans, the first African-American to hold a world title, defeated Denmark's Battling Nelson.

In 1989 British boxer Tony Wilson took on his rival Steve McCarthy in a light heavyweight fight in Southampton, England. In the third round McCarthy knocked down Wilson and began pounding on him in one corner of the ring.

The referee looked ready to stop the fight, when suddenly Wilson's mother climbed into the ring and started hitting McCarthy with her shoe. Bizarrely McCarthy, claiming he was injured by the shoe, refused to return to the ring and Wilson was declared the winner.

In 1993, a world heavyweight bout between Evander Holyfield and Riddick Bowe was held up for several minutes after a man paraglided into the ring. Miller, who was notorious for these sort of stunts, was beaten unconscious by members of Bowe's entourage.

"It was a heavyweight fight and I was the only guy who got knocked out," he later joked. Miller committed suicide in the Alaska wilderness in 2003.