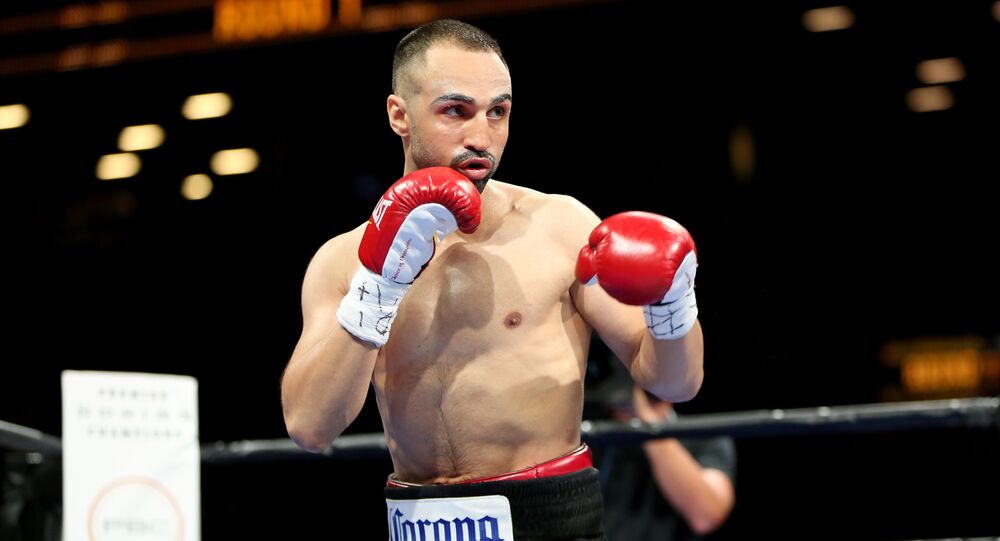 Retired boxer Paulie Malignaggi has quit as UFC star Conor McGregor's sparring partner ahead of his fight with Floyd Mayweather later in August. The New Yorker said the whole thing had "become a fiasco" and a "circus."

Malignaggi appears to have been angry that a photograph of him lying on the canvas with McGregor standing over him was leaked to the press earlier this week, making it appear as if the Irishman, who is a boxing novice, had knocked him down.

Malignaggi tweeted about the picture, suggesting that he was pushed over, rather than being knocked down by a punch.

Its not nice 2 paint a pic that isn't true, this was a pushdown in sparring, post the whole video rounds 1 through 12 UNEDITED https://t.co/R82BLiMMVm

"I am leaving the McGregor training camp today. I came with the best intentions and intended to help out," he said in a statement.

​Malignaggi retired earlier this year after being knocked out by little-known British fighter Sam Eggington.

I actually beat his ass, 24 hrsoff a flight 2 lol, which is why Im saying post the vid, I try not 2 be petty but seems it's late 4 that now. https://t.co/vSE2Iw4ffM

​The former IBF world super lightweight champion had been on the slide for some years.

He was knocked out by Ricky Hatton in 2008 and by fellow Briton, Amir Khan, two years later and lost eight fights in total.

Another handy 12 rounds today. We are prepared to destroy Floyd.
Pick whatever size gloves you… https://t.co/YMxNu9SoI5

Hatton was destroyed in 10 rounds by Mayweather in 2007 and Khan was knocked out by Saul Alvarez, a fighter who beat easily on points in 2013.

Malignaggi is also not noted for his punch power — of his 36 victories, only seven were by knockout, compared to Mayweather who stopped 26 opponents within the distance.

So it's safe to safe that sparring with Malignaggi is not great preparation for McGregor's first ever fight in a boxing ring against the man who has been the best pound-for-pound fighter for the last decade.

Mayweather and McGregor are due to fight in the T-Mobile Arena in Las Vegas on August 26.

Although it is expected to be the biggest money-spinner in boxing history, purists have sneered at the fight from the minute it was announced because McGregor, although a big name in the world of mixed martial arts, has never had one fight before under the Queensberry Rules.

Earlier, Mike Tyson said McGregor was "going to get killed."

"I won't release any information about his game plan or what he's working on — I wouldn't do that. But this has become a fiasco. It's a circus," said Malignaggi, using a phrase which has been used frequently by critics of the bout.

"I do want that sparring video released. The UFC's PI definitely has that video. I understand it can't come out now, but Conor, if you have any balls, release what really happened," he added, referring to an unedited version of the sparring session in which he ended up on the floor.

Boxing writer, Ben Dirs, said he was not surprised by this week's events.

"It's just the latest act in what has been a pantomime from long before the fight was signed. A few months ago, a boxer called Chris van Heerden was compelled to release grainy video footage of him making McGregor look pretty ordinary in a sparring session, in retaliation for McGregor releasing an edited version — which was unflattering to Van Heerden — without the South African's permission," Dirs told Sputnik.

"So if you're asking who I believe in the latest incident, I'd have to say Malignaggi. It's all part of the promotion, McGregor wanting potential pay-per-view customers to think he has a chance of causing Mayweather difficulties. However, even if he did drop Malignaggi in sparring — and I don't think he did — it doesn't really prove anything. It's like somebody claiming they've got a chance of beating Roger Federer at Wimbledon because they took a game off him in a knock-up," Dirs told Sputnik.

"I think 'circus' is a pretty good way to describe Mayweather-McGregor, although a fairground might be more accurate — it's freakish, illusory and pretty much everybody, apart from the fairground owners, is going to get ripped off," he said.

"That said, I don't think it will do boxing much, if any, damage — unless, of course, if Mayweather walks onto one and gets knocked out. But I don't think that has any chance of happening, simply because Mayweather is one of the best defensive boxers of all time and McGregor would struggle to win an Irish amateur title. In fact, he'd have absolutely no chance of winning an Irish amateur title, unless he stuck at the boxing for a few years, which, of course, he won't," Dirs told Sputnik.