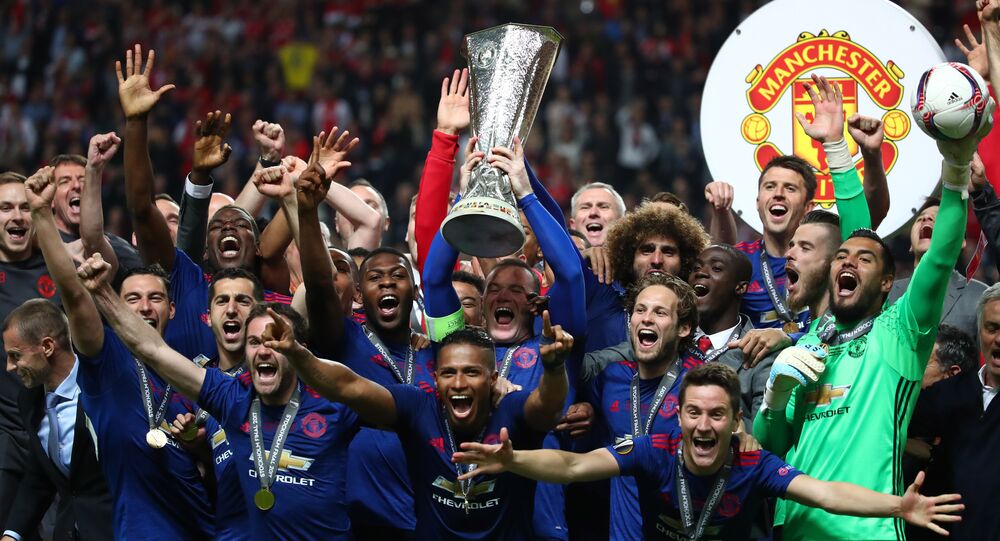 Manchester United beat Ajax in Stockholm on Wednesday night and manager Jose Mourinho dedicated the victory to the victims of Monday's bombing. United fans flew banners at the stadium which paid homage to the victims and showed a message of defiance.

Around 20,000 United fans were in the Swedish capital for the game and security had been stepped up following the suicide bombing on Monday (May 22), which killed 22 people at the Manchester Arena.

But the event passed off peacefully and there were no violent clashes between United and Ajax fans. Ajax have a hooligan element, known as the F-Side, but they took defeat with good grace.

As the names of more of the victims have been revealed, it has also emerged that the bomber, Salman Abedi, 22, traveled to Germany four days before the blast.

He visited Dusseldorf. but it is unclear whether he visited another jihadist cell in the city.

Among the messages brought to the Friends Arena in Stockholm was a giant red banner which read: "Manchester — a City United #prayformanchester."

Andrew Kilduff, from Stretford End Flags who made the banner on Tuesday (May 23), said:

"We just had to put a message out to say the supporters may be here, looking like they're enjoying themselves at a football match but the thoughts of everyone are back in Manchester."

United's victory means they qualify for next season's Champions' League, despite finishing only sixth in the Premier League.

Everyone at #MUFC would like to thank you all for your fantastic support this season. pic.twitter.com/P0RL2VnM9F

But the club's Portuguese manager Jose Mourinho said in a press conference after the match: "It was really hard. We had to prepare ourselves to do our job and to try to forget events that are obviously much more important than our job."

He said he agreed with UEFA's decision to play the match and he said the "tragedy" on Monday took some "happiness" from their achievement.

Mourinho said if they could swap the trophy for the lives of the 22 who died they would obviously do it and "wouldn't think twice."

"Does this cup make the city of Manchester a little bit happy? Maybe. But we just came to do our job. It comes without the happiness which usually comes with these matches."

Paul Pogba, who moved to United last summer for a world record fee of US$115 million, scored  the first United goal after 19 minutes and the victory was assured from the minute Armenian midfielder Henrikh Mkhitaryan struck the second two minutes into the second half.

Mourinho said the players did well to block out the tragedy and focus on the game.

Midfielder Juan Mata said: "Obviously we were really really sad about what happened but we tried to focus on the football. There are many more things more important than football in life but we tried to win to lift the spirits of the town, at least for some hours."

Manchester City captain Vincent Kompany had posted a message on Twitter earlier saying they "stand shoulder to shoulder" with the victims and praising the "true spirit" of the city.

Kompany said: "No words will ever comfort the families who have lost the loved ones but…we stand with you and will do everything we can to help."