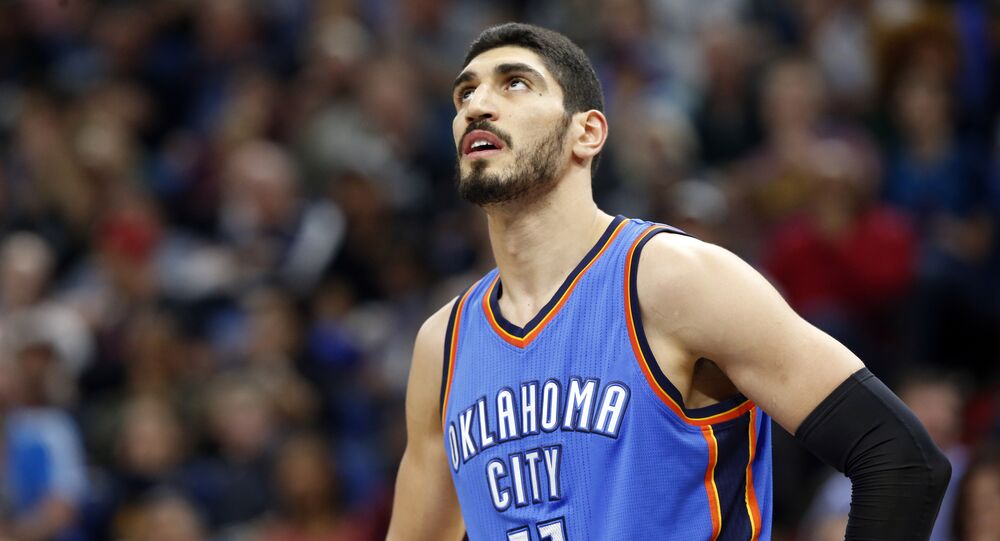 Enes Kanter, currently a center for the professional NBA Oklahoma City Thunder basketball team, reported that his Turkish traveling passport was canceled while he was in transit in Romania, a move he says is retaliation for critical remarks he's made about the Turkish president.

Kanter, born in Switzerland and now living in the United States, tweeted on Saturday that he was currently stranded in Romania while on vacation in Europe, after border police in the country told him that his passport had been revoked.

"We are in Romania and they said they canceled my passport by [the] Turkish embassy," Kanter says in a video posted to Twitter.

"The reason behind it is just, of course, my political views and the guy who did it is, you know, Recep Tayyip Erdogan, the president of Turkey," he said.

Kanter strongly criticized Erdogan for last week's violent suppression of a peaceful Kurdish protest outside the gates of the Washington DC residence of the Turkish ambassador to the US. Erdogan's personal bodyguards instigated the violence after the Turkish president met with US President Donald Trump at the White House, less than two miles away.

"He has attacked the people in Washington," Kanter said, "He is a bad, bad man. He is a dictator and he is the Hitler of our century."

Kanter found himself echoing the sentiments of many on Capitol Hill. including US Senator John McCain (R-AZ), who condemned the violence committed by Turkish bodyguards against US citizens in the United States.

"This is the United States of America," McCain said, cited by The Hill. "We do not do this here. There is no excuse for this kind of thuggish behavior."

Kanter is a vocal supporter of Fethullah Gulen, a former Erdogan ally, now painted by Ankara as a foe of the Turkish president's increasingly authoritarian government. Gulen, a priest and political opposition figure, currently lives in Pennsylvania to escape arrest and torture at the hands of his former compatriot. He is accused by the Turkish government of being behind the July 2016 coup attempt in the country.

Following the coup attempt, Erdogan's government has shuttered thousands of schools, health clinics and universities and has arrested or detained close to 200,000 teachers, professionals, law enforcement employees, journalists and many others who express dissent against his autocratic regime, in what amounts to a massive consolidation of power.

After several hours, Kanter was reportedly allowed to leave the airport, and has promised to discuss his detention and release at a press conference in the US.