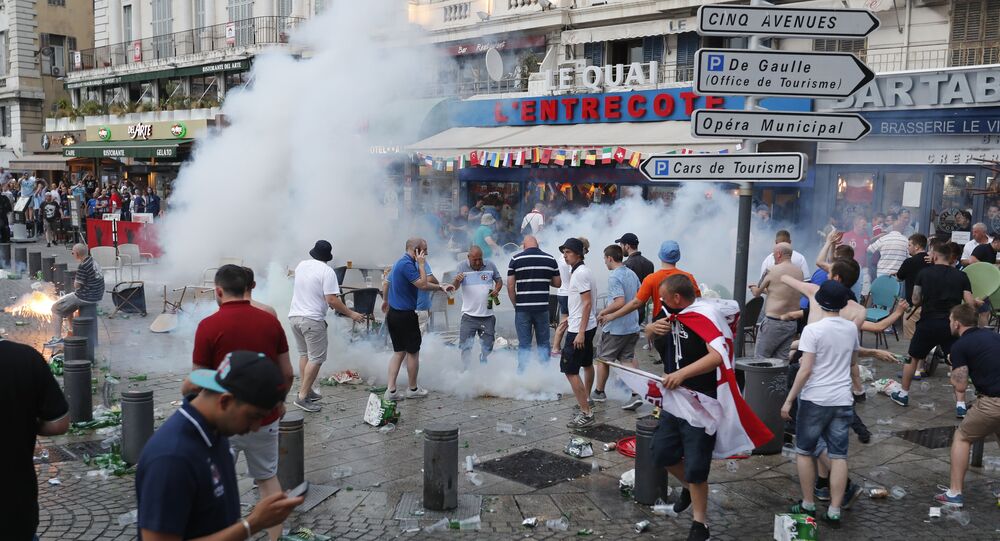 "Some Italian media wrote about this documentary film, there were television broadcasts, Facebook posts but I wouldn't say that there were many reviews. I am sure that many Italians remember the British hooligans more, and them complaining about such a problem raises a smile."

Franzo, who has followed Juventus since the 1970s and written two books about Juventus' hardcore fans, the "Ultras," said that English fans have a long history of bad behavior.

"I have often noticed that the notorious British fans present themselves as strong when others are weak, and against the strong they pretend to be innocent lambs. It's enough to look at a photo from 1985 in Brussels, it says it all."

During the 1985 European Cup final between Liverpool and Juventus held at the Heysel stadium in Brussels, 39 people died and 600 were injured after a wall of the stadium collapsed.

© Flickr / Elliott Brown
India Threatens to Cancel All Future Permits to BBC
The wall collapsed after rioting in which Liverpool supporters stampeded towards Juventus fans, who tried to escape. Under pressure from the retreating Italian fans, the wall collapsed and fans were crushed and trampled on in the panic.

At a trial in Belgium in 1989, 14 Liverpool fans were found guilty of involuntary manslaughter. All English football teams were banned from European competition for five years, and Liverpool were banned for six.

During the Euro 2016 Championships in France, English fans clashed with several other nationalities, including French and Russians. Following violence between English and Russian fans in Marseille, two Russian supporters and six English supporters were arrested.

While the British press was quick to paint the English as victims, in fact their supporters were some of the worst offenders at Euro 2016. During the tournament, 45 England fans were arrested, as were 11 Northern Ireland fans and nine Wales fans.

#fuck off #Russia again and again. Who will stop it?! #EURO2016 #ENGWAL pic.twitter.com/iR2mwS6MTm

​Franzo said that English fans in Marseille were looking for violence, and were perturbed when Russian fans presented a well-organized defense.

"In Marseilles they faced opponents who knew what was happening and were able to organize themselves before an attack. The English found themselves an enemy 'with teeth,' just as tough as them. Prior to this confrontation I, like many others, knew from the news that the English fans are asking for it," Franzo said.

© AP Photo / Ariel Schalit
French police use tear gas against England supporters in downtown Marseille, France, Friday, June 10, 2016
The football writer said he is looking forward to attending the 2018 World Cup in Russia, where he expects a warm welcome. Having watched matches in Russia before, he commented on the friendliness and solidarity between Russian fans. For example, fans of other Russian clubs participate in commemorations of the victims of the 1982 Luzhniki disaster, in which 66 Spartak Moscow fans died in a crush.

"I noticed that our behavior has a lot in common with them, but there are also differences which forced me to positively evaluate what it means to be a fan. For example, (fans) at other stadiums in Italy often insult the victims of the Heysel stadium tragedy. In Russia, when Spartak took part in a Championship game around the anniversary of the tragedy, opposing fans often held up banners in memory of the victims. Such an understanding of what it means to be a fan is a credit to the Russian fans," Franzo said.

BBC Documentary About Russian Hooligans is 'a Smear Campaign Against Moscow'