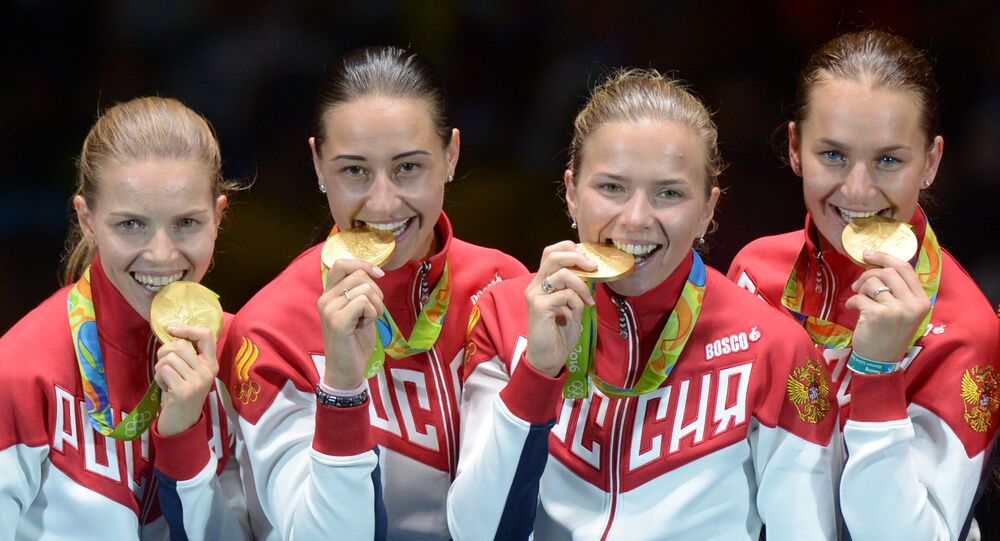 Record-Setting Rio: The Most Memorable Moments of This Year's Olympics

Events like Neymar's fastest goal and Russia's fencing triumph have provided some of the most memorable moments of the 2016 Rio Olympics.

© REUTERS / Kevin Coombs
The Biggest Scandals of the 2016 Rio Olympics
The Rio Olympics come to an end on Sunday, and despite early concerns about the Zika virus or Brazil's unstable political situation, the games have managed to provide many great sporting moments for spectators, which will be remembered for years to come.

Jamaican sprinter Usain Bolt made Olympic history when he won gold in the men's 4 x 100 relay sprint, and the men's 100m and 200m sprinting events.

​"What else can I do to prove to the world I am the greatest?" Bolt said after his 200-meter final win in Brazil.

"I am trying to be one of the greatest. Be among Muhammad Ali and Pele. I hope after these Games I will be in that bracket."

US swimmer Phelps, who came out of retirement to compete in Rio, won five gold medals and one silver at his fifth and final Olympic games. Phelps was already the most decorated Olympian of all time after the London 2012 Olympics, when he had 22 medals, 18 of them gold.

"I said it before but this is the last time you'll see me in the water racing. After the relay last night, that's why I was hunched over and more emotional than I was in London. Because it actually meant something. I don't want to say London didn't mean anything but this is how I wanted to finish," said Phelps after the competition.

Neymar, star striker for the Brazilian men's team, set a new record for fastest goal scored at an Olympic football match, when he scored after just 14 seconds in the host's semi-final men's game against Honduras. Brazil went on to win the match 6-0, and face Germany in the final on Saturday.

​The Brazilian women's team won a bronze medal, while Germany won the final against Sweden 2-1. The success of the women's team led fans to petition Nike to sponsor the star striker of the women's team, Marta. Marta is one of the greatest ever-players in the women's game, and is the all-time top scorer at FIFA Women's World Cup tournaments, with 15 goals.

Brazilian fans get into the Olympic spirit

While fans of the host nation had moments of overexcitement, such as their booing of French pole vaulter Renaud Lavillenie during his final with Brazilian Thiago Braz da Silva, their raucous support has made for some memorable games.

​After the Brazilian women's volleyball team was beaten by China in the tournament's quarter-final, Brazilian fans shifted their support to the Serbian women's team in their semi-final against the USA, which they won 3-2. On Sunday, Serbia faces China in the women's final.

Argentinian tennis player Juan Martin Del Potro also enjoyed support from the home crowd, making a comeback to competitive tennis after a 14 month absence due to injury. Del Potro beat Rafael Nadal in the men's semi-final, and eventually went home with a silver medal after losing to Andy Murray in the final.

"Russia's synchronized swimming is unusual, even underwater they are perfectly synchronized."

© Sputnik / Alexander Vilf
Golden Mermaids: Russian Synchronized Swimming Team Wins Big at Rio Olympics
Ilgar Mamedov, head coach of Russia's Olympic fencing team, made an unusual bet with his charges: if Russia won two gold medals in the discipline, then he would shave his head. In the event, Russia's fencers won two bronze, one silver and four gold medals, and Mamedov has promised to keep his word.

"We have dedicated our victory to the Russian athletes, who could not come to the Olympics," Sofiya Velikaya told reporters after the final.

After the final of the women's team sabre, Russia's final gold in the discipline, Championat.ru columnist Yevgeniy Slyusarenko commented that "Russia – Ukraine has become the El Clasico of world fencing in recent years," as the Russian team won the world championships in 2012 and 2015, while the Ukrainian team took the world title in 2013.