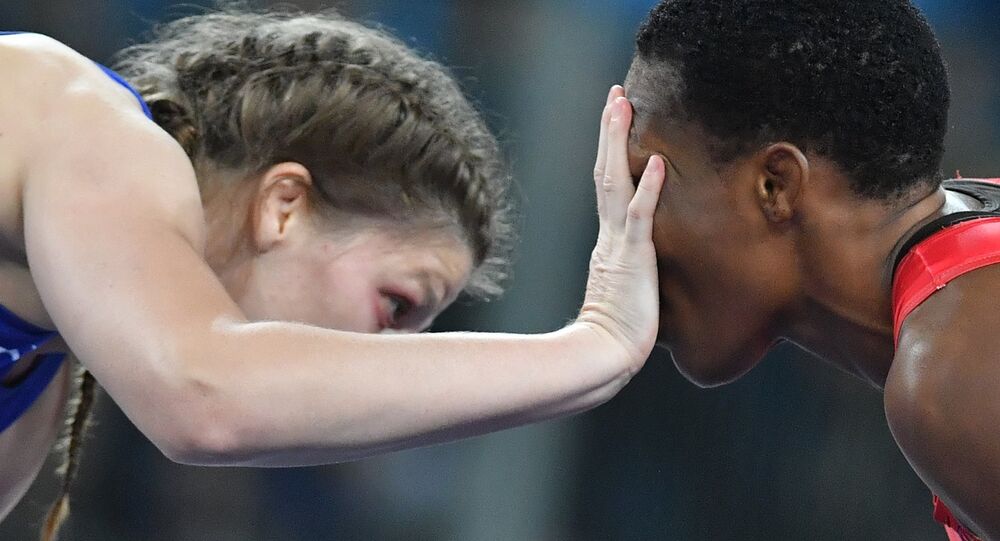 Russian athletes won one silver and two bronze medals on the 13th day of the 2016 Summer Olympic Games in Rio de Janeiro on August 18.

RIO DE JANEIRO (Sputnik) — Thursday saw 25 sets of medals being awarded in athletics, boxing, badminton, beach volleyball, sailing, hockey, diving, rowing and canoeing, taekwondo, wrestling and triathlon. US athletes remained in the lead, with medals totaling at 100, 35 of them gold. The Russian team dropped to the fifth place, with a total of 12 gold medals and 44 medals overall.

Russian boxer Vladimir Nikitin was unable to compete in the finals due to incisions obtained in the previous fights, but won the bronze medal of the Games in the men's bantam 56 kg.

Jamaican sprinter Usain Bolt won its eighth Olympic gold medal in men's 200m. The athlete seems to won effortlessly, leaving rivals behind, without giving any of them a chance. In the finals, Bolt ran the distance in 19.78 seconds, failing to surpass his own record unlike he planned. Canadian Andre de Grasse came second with 20.02 seconds while Christophe Lemaitre of France was third.

© Sputnik / Ramil Sitdikov
Russian Male Volleyball Team Qualifies for Semi-Finals in Rio
The start of the triathlon competitions turned out to be a failure for the Russian team. None of the Russian athletes could compete for the medals of the Games with Alexander Bryukhankov not even able to finish because of a leg injury.

Brothers Igor and Dmitriy Polyanskiy finished one after the another at 31st and 32nd places respectively. Other brothers — Alistair and Jonny Brownlee of the United Kingdom — have become the winners of the Games. Alistair, who decided to wait for his brother before the finish line, became the first double triathlon Olympic champion in history.

Russian handball women's team reached the Olympic finals, defeating the Norwegians, the winners of the Games in Beijing and London, in 2008 and 2012 respectively. The main time had not revealed the winner.

The Russian national team defeated the Norwegians 38:37 in the additional time and is now in the finals against the French team, which they have already beaten in the group stage in Rio de Janeiro.

Breaking into the finals, the Russians guaranteed themselves at least the same result as at the 2008 Olympics, when they lost to the Norwegians in the finals and won silver.