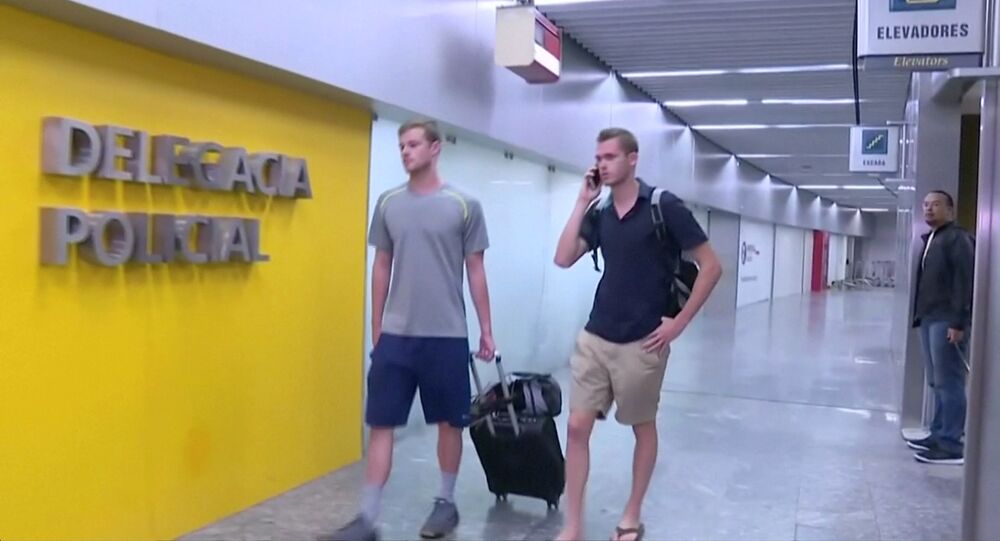 The US Olympic Committee (USOC) has apologized for the actions of American Olympic swimmers who had claimed a false robbery in Rio.

MOSCOW (Sputnik) – US swimmer Ryan Lochte has previously claimed that he and three other Olympic swimmers, Jack Conger, Gunnar Bentz and Jimmy Feigen, were robbed at gunpoint by people claiming to be policemen on Sunday. On Thursday, Brazilian Chief of Civil Police Fernando Veloso said that the US Olympic swimmers’ claims of being robbed in Rio are false.

"The behavior of these athletes is not acceptable, nor does it represent the values of Team USA or the conduct of the vast majority of its members. We will further review the matter, and any potential consequences for the athletes, when we return to the United States. On behalf of the United States Olympic Committee, we apologize to our hosts in Rio and the people of Brazil for this distracting ordeal in the midst of what should rightly be a celebration of excellence," the USOC said in a Thursday statement.

The USOC acknowledged that the swimmers were not robbed.

© REUTERS / GLOBO TV
US Olympic Swimmers Pulled Off Flight Home Amid Robbery Investigation
"As we understand it, the four athletes (Bentz, Conger, Feigen and Ryan Lochte) left France House early in the morning of August 14 in a taxi headed to the Olympic Village. They stopped at a gas station to use the restroom, where one of the athletes committed an act of vandalism. An argument ensued between the athletes and two armed gas station security staff, who displayed their weapons, ordered the athletes from their vehicle and demanded the athletes provide a monetary payment. Once the security officials received money from the athletes, the athletes were allowed to leave," the USOC said.

On Wednesday, swimmers Conger and Bentz were pulled off a flight from Rio de Janeiro to the United States amid an investigation into the alleged robbery case.

The New York Times reported, citing Lochte’s lawyer, that the swimmer had left Brazil before a judge issued an order to seize the passports of the four swimmers.

Brazil’s police chief Fernando Veloso said that "in theory" one or more of the swimmers might be charged with false reporting of a crime and for vandalizing a gas station.