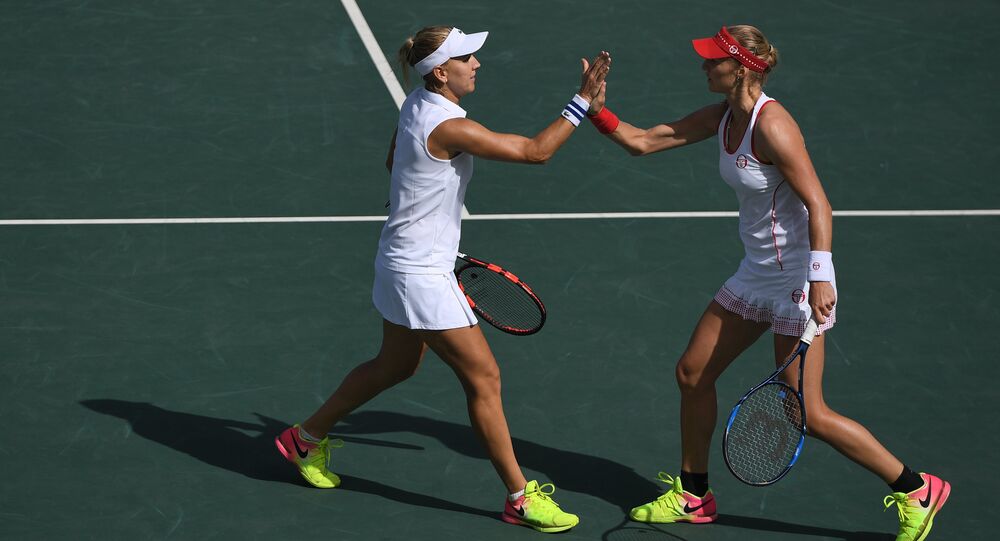 MOSCOW (Sputnik) — A total of 22 medals in athletics, cycling, boxing, gymnastics, diving, fencing, shooting, golf, sailing, tennis, wrestling and weightlifting were awarded to Olympic athletes on Sunday. US athletes remained at the lead, with total awards coming to 69, 26 of them gold. The Russian team went up to fourth place, with a total of nine gold medals and 30 medals overall.

Greco-Roman wrestler Roman Vlasov came on top in the 75 kilogram category competition, repeating his London 2012 success. Vlasov defeated rivals from South Korea, China, Croatia and Denmark on the first day of the competition.

Gymnast Aliya Mustafina won her career's second gold medal after beating all rivals in the uneven bars final with a score of 15.9. US gymnast Madison Kocian won silver, while Germany's Sophie Scheder got bronze.

Track cyclist Denis Dmitriev competed for bronze after losing to his UK rival Jason Kenny in the semi-finals the day before. On Sunday, Dmitriev took home Russia's first medal in men’s sprint since 1988, while Kenny was awarded with gold and his teammate Callum Skinner won silver.

Jamaican sprinter Usain Bolt proved to be the world's fastest man for the third consecutive Games after running 100 meters in 9.81 seconds and beating his US rival Justin Gatlin. Gatlin, who previously faced two disqualifications over doping, was booed by the crowds ahead of the race, but came close second in 9.89 seconds. Canada's Andre De Grasse won bronze, completing the race in 9.91 seconds.

UK golfer Justin Rose became the first Olympic champion in golf since 1904, with the sport finally back in the Games.

Russian long jumper Darya Klishina is set to be Russia's only athlete in the Rio Games after the Court Of Arbitration For Sport (CAS) overturned a recent International Association of Athletics Federations (IAAF) decision to ban her from taking part.

"The CAS Panel in charge of this matter heard the parties and their representatives today between 11am and 3pm. At 1:00am today, the parties were informed that the application was upheld and that the Athlete remained eligible to compete in the Olympic Games in Rio," the CAS said early on Monday.

On July 24, the IAAF prohibited all Russian athletes from taking part in international competitions, including the upcoming Rio Olympics, except Klishina, who trains in the United States. The federation later changed its mind over alleged additional findings of the World Anti-Doping Agency investigation into doping allegations against Russian athletes.