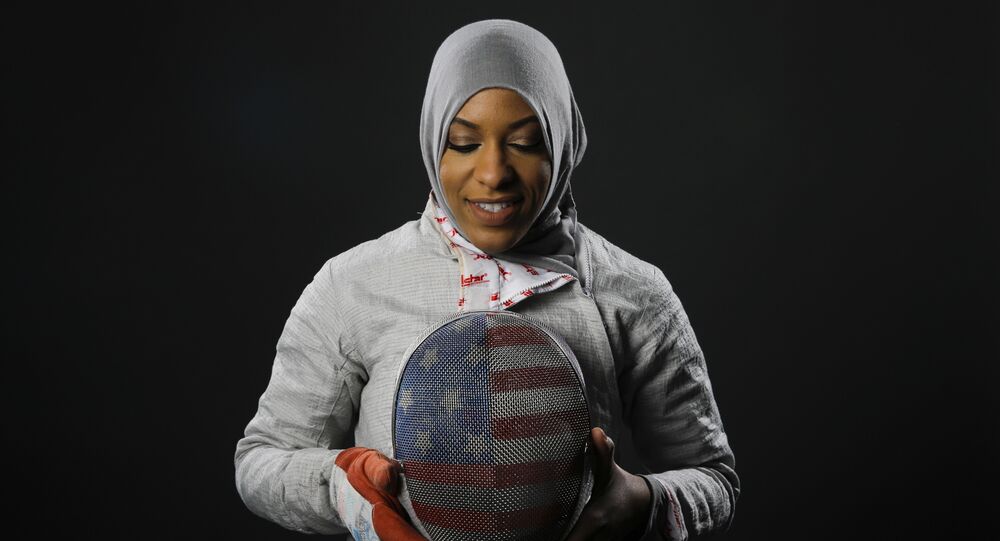 Women athletes wearing hijabs are disadvantaged, and the IOC should sanction countries which force competitors to wear them, Veronique Lebar told Sputnik France.

© Sputnik
What the Hijab Really Hides - A Woman's Body or Societal Issues?
While religious symbols are banned from the Olympics, competitors are allowed to wear the hijab, a veil worn by Muslim women which covers the head and chest.

For example, at the last summer Olympics in London in 2012, religious symbols were banned from lapel badges worn by chaplains at the Games, but female competitors from Saudi Arabia were forced to wear veils in order to compete.

In 2012 the International Olympic Committee (IOC) ruled against the International Judo Federation, which had ruled that Saudi competitors would not be allowed to compete wearing a hijab. However, the IOC later relented, and allowed the Saudis to wear hijabs.

Organizations such as the Ligue du Droit International des Femmes (League for the International Rights of Women) have unsuccessfully campaigned against the hijab's appearance at the Olympics.

© AFP 2021 / OLIVIER MORIN
This file photo taken on August 8, 2012 shows (from L) Central Africa Republic's Elisabeth Mandaba, Colombia's Rosibel García and Saudi Arabia's Sarah al-Attar competing in the women's 800m heats at the athletics event of the London 2012 Olympic Games in the capital
Veronique Lebar, President of the French organization, Committee of Ethics and Sport, told Sputnik France that the politicization of the IOC's decision on hijabs bears similarities with the recent politicization of the doping scandal in Russian sport.

"The IOC is under the influence of politics, and not the anti-doping system. It should clearly follow the rules of sport which are stated in its code of ethics. That is, treating all sportspeople equally, whether this is in regard to doping or another area," Lebar said.

Lebar said that wearing hijabs is dangerous, and prevents competitors from performing to the best of their ability.

"It is very well known that wearing hijabs is dangerous for sportswomen, for example in a discipline like judo there is a risk of suffocation."

© REUTERS / Brendan McDermid
Audiences Puzzled by US Athletes Apparently Wearing Uniforms With Russian Flag
Lebar called for sanctions against countries which don't allow women to compete in the Olympics without a hijab, and says the whole country should be banned from competition for trying to enforce such a rule. However, she thinks that the OIC is unlikely to take such a step.

"I think the IOC is very, very far from that, taking into account that it didn't show bravery over the doping issue. Why is it going to show spirit over the hijab issue?"

"A systematic punishment is necessary, but money is an issue here and they won't punish Qatar or Saudi Arabia, which provide them with a lot of money. That's the problem," she said.