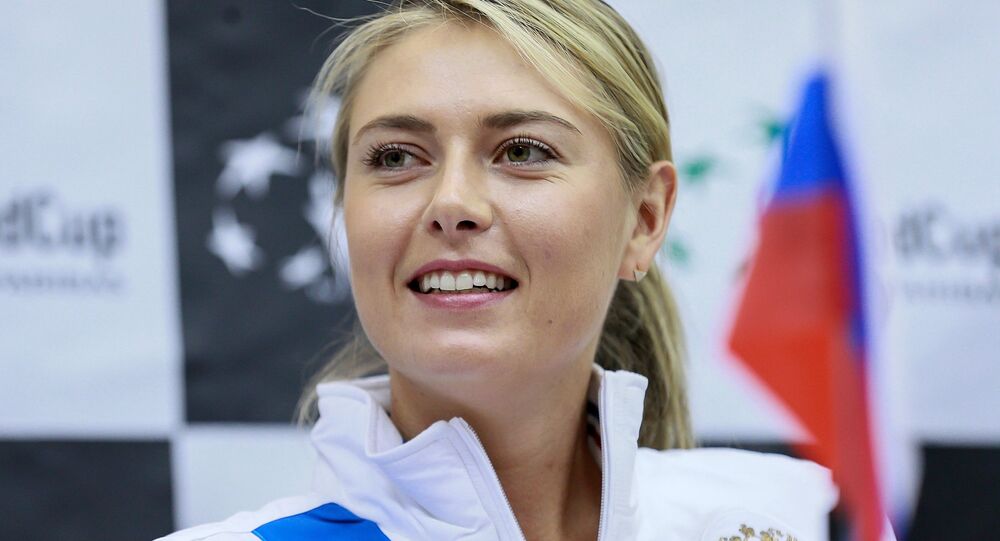 MOSCOW (Sputnik) – On Monday, Sharapova, a five-time Grand Slam champion, said she tested positive for meldonium, medicine added to the list of banned substances on January 1, 2016. She said her family doctor began issuing meldonium, also known as mildronate, in 2006 because of the health issues she had.

"We continue to insist that sports should always remain outside politics and that attempts of politicizing sports, attempts to use sports as some sort of a political instrument to reach one or another goal is destructive for sports, international sports. It is unacceptable and unjustifiable," Peskov told journalists.

© AFP 2020 / ROBYN BECK
Show of Support: Fans and Tennis Players Extend Sympathy to Sharapova Over Drug Scandal
The 28-year-old is ranked as the 6th best tennis player in the world by the Women's Tennis Association, and ranked number 1 in singles on five separate occasions. Born in Siberia, she has played professionally since 2001, when she was only 14-years-old.

Sharapova is the only Russian to hold the career Grand Slam, and earned Russia a silver medal for women's singles during the 2012 Summer Olympics.

According to the Kremlin spokesman, there have been several cases of athletes and sports officials being taken down, including the recent scandal involving former FIFA head Joseph Blatter.

"We now have to just do our job, educate athletes not to indulge in such things, not to lose heart and, of course, win competitions," Peskov added.

The spokesman also urged the international community not to project the incident on to Russian sports on the whole so as not to cast a shadow on the achievements of Russian athletes.