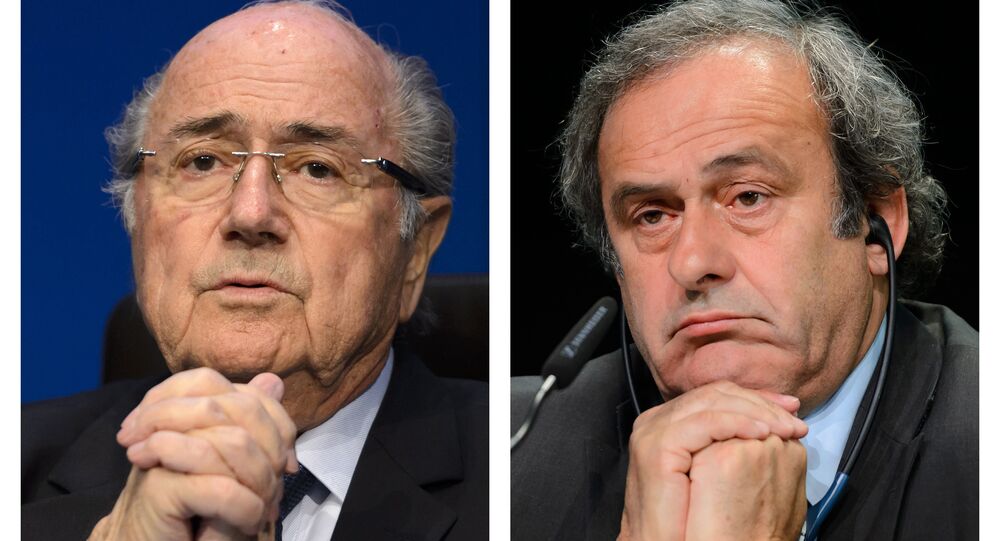 The FIFA Appeal Committee has reduced bans for Joseph Blatter and Michel Platini from eight to six years.

© AFP 2020 / PAUL FAITH
FIFA Bans Former Secretary General Valcke for 12 Years
MOSCOW (Sputnik) — The FIFA Appeal Committee has partially confirmed the decisions taken by the adjudicatory chamber of the independent Ethics Committee in December 2015 regarding Joseph Blatter and Michel Platini respectively, whose bans have been reduced from eight to six years, FIFA said in a statement Wednesday.

"Michel Platini is banned from taking part in any football-related activity (administrative, sports or other) at national and international level for a period of six (6) years as from 8 October 2015," the statement said.

"Joseph S. Blatter is banned from taking part in any football-related activity (administrative, sports or other) at national and international level for a period of six (6) years as from 8 October 2015," according to the same statement.

The decision comes after two days of hearings of Blatter and Platini by the FIFA Appeal Committee that took place in Zurich last week.

Their appeals were dismissed in respect to violations of four FIFA Ethics Code articles that deal with loyalty and accepting gifts. The Appeal Committee also struck down the investigatory chamber’s appeal for a life ban for both after it ruled there was not enough evidence to establish a breach of the code’s regulations on bribery and corruption.

After taking into account some "strong mitigating factors," including the services they had rendered to FIFA, UEFA and football in general, the Appeal Committee determined that a one-year reduction on two counts of FIFA Code breaches was proper.

Blatter and Platini were both handed 8-year suspensions last December for their role in a major FIFA corruption scandal. It erupted after Swiss authorities opened a criminal case against Blatter in September over a payment of 2 million Swiss francs that he made to Platini.