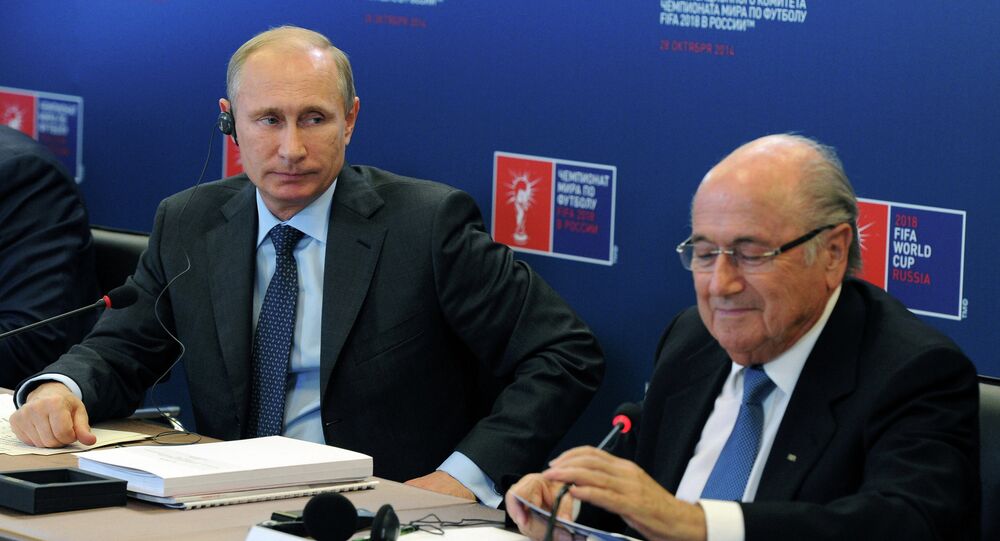 Russian President Vladimir Putin said Thursday he did not rule out that in the FIFA case the United States had been using the same methods for charging WikiLeaks’ Julian Assange and former NSA contractor Edward Snowden to achieve its goals.

© Sputnik / Alexey Nikolsky
Red Card: US Trying to Block Reelection of Blatter as FIFA President - Putin
MOSCOW (Sputnik) — On Wednesday, seven FIFA officials were arrested on corruption charges in Zurich, Switzerland, where they had gathered for the FIFA congress and the association's presidential election on May 29.

Later the same day, the US Justice Department announced it had charged 14 individuals, including nine FIFA officials and five corporate executives, for racketeering, conspiracy and other forms of corruption.

"Unfortunately, our American partners use such methods, pursuing their ulterior motives, and do it unlawfully by prosecuting people. I don’t rule out that in case with FIFA the situation is similar, although I don’t know how it is going to end. But the fact that it is happening ahead of the FIFA presidential election leads to such conclusion," Putin told journalists.

© AP Photo
The Ugly Game: Could FIFA Corruption Arrests Be Final Whistle for Blatter?
The president pointed out that a person's guilt must first be proved in court and then he or she could be extradited.

The Russian leader recalled the situation with Snowden and Assange, pointing out that both are sought by US authorities because they revealed information about US mass surveillance practices around the world and US Army operations in the Middle East.

Putin observed that Snowden was, at least, a citizen of the United States, whereas Assange was an Australian but still forced to seek asylum to avoid being transferred to US soil.

US Attorney General Loretta Lynch was quoted as saying by The New York Times on Wednesday that she had never had qualms about bringing charges in the United States, since court documents had indicated that the illicit activities affect interstate and foreign commerce and occurred partially in New York’s Eastern District.