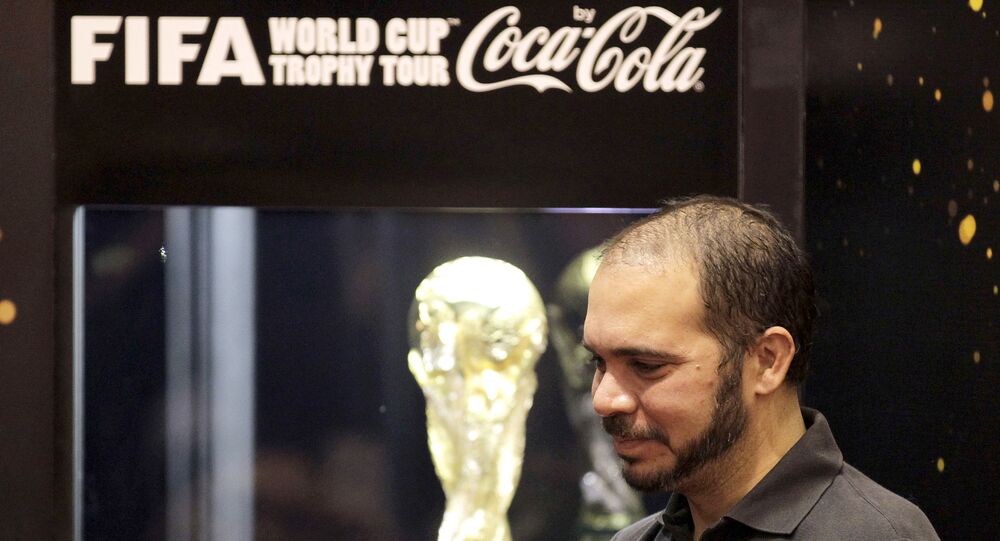 MOSCOW, January 6 (Sputnik) — Prince Ali Bin Al-Hussein of Jordan has announced that he intends to challenge Sepp Blatter for the presidency of the International Federation of Association Football (FIFA) in May when elections are held.

In a one page statement released Tuesday, Ali, 38, states that he would be "seeking the presidency of FIFA because [he believes] it is time to shift the focus away from administrative controversy and back to sport. The headlines should be about football, the beautiful sport, not about FIFA." In the statement, Ali notes that world soccer "deserves a world-class governing body" that serves as "a model of ethics, transparency and good governance."

© Photo : Wikipedia / Inconnu
Swiss Lawmakers Tighten Financial Checks on FIFA, IOC
Ali has become the hope for reform in the organization, which would be aimed at freeing it from corruption scandals ranging from ticket scams to allegations of bribery in bidding for the 2018 and 2022 World Cup events in Russia and Qatar. After months of "careful consideration and many discussions with respected FIFA colleagues," Ali notes that "the message I heard, over and over, was that it is time for a change."

Switzerland's Blatter, 78, will be seeking a fifth term of office, and has been chairing the international body since 1998. Ali will be joined by Frenchman Jermone Champagne, 56, in challenging Blatter.

Ali is expected to be able to bank on the support of Michel Platini, the head of the Union of European Football Associations, which represents 54 countries, and that of US Soccer chief Sunil Gulati. BBC Sports analyst Mani Djazmi has noted that with the European body solidly against another Blatter run, Ali "has got a chance," although in times past "others have tried to overcome [Blatter] but have failed."

Goal.com's Peter Staunton said that he believes Ali "will run the longtime FIFA chief close," counting "on allies from across the FIFA spectrum." It has been assumed that Blatter has been assured the support of Africa's 56 members of the Confederation of African Football, and Asian Football Confederation head Salman Bin Ibrahim Al-Khalifa of Bahrain has stated late last year that its 47 members would support Blatter in the upcoming elections.

The 209 members of FIFA will elect the body's president by secret ballot in Zurich May 29. A two-thirds majority is necessary for victory in the first round of voting, a simple majority necessary in subsequent rounds.

© Sputnik / Aleksei Druzhinin
Russia Waged an Honest Campaign to Host the 2018 World Cup: Sports Minister
Prince Ali is the head of the West Asian Football Federation, and has been a member of the FIFA executive committee since 2011. He is among those FIFA officials who have called for the publication of the full, unedited version of ethics investigator Michael Garcia's report on the alleged corruption and bribery which tarnished the 2018 and 2022 World Cup bids. Ali is the son of the late King Hussein of Jordan, and the brother-in-law of Dubai's Sheikh Mohammed. In his time as vice president of the Asian Football Confederation, he has focused on the promotion of women's and youth soccer in West Asia, and has led an initiative to lift FIFA's ban on the hijab in women's soccer with that aim in mind.
...
Reddit
Google+
Blogger
Pinterest
StumbleUpon
Telegram
WhatsApp
44

FIFA to Decide Whether to Publicize Full Version of Garcia's Report