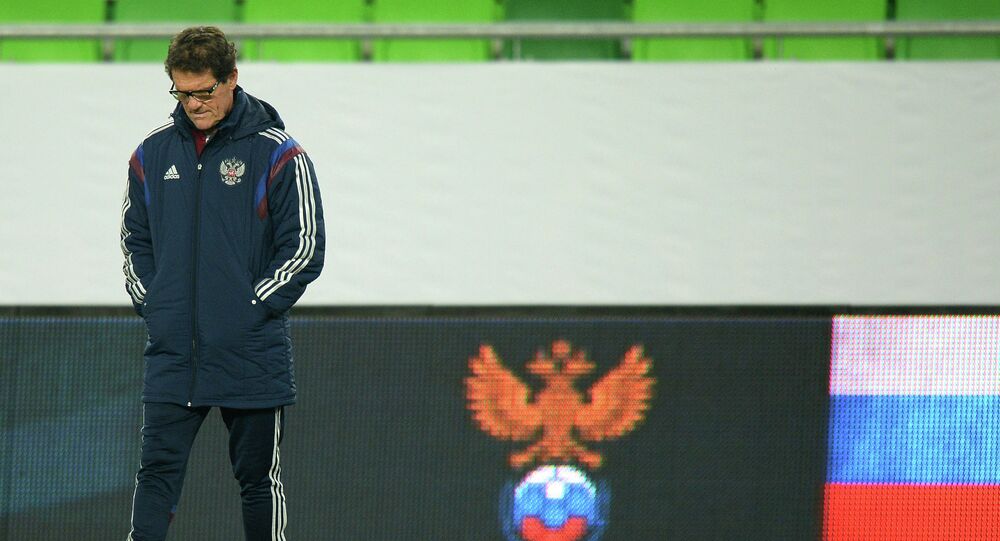 In September, the Football Union of Russia admitted it had owed Fabio Capello $11 million but the organization had no money to pay the debt.

"We have the whole day ahead. There will be more news — either from us or from Rostrud. Have patience. This unsound interest is inappropriate. Yes, Rostrud stated that the debt should be paid by December 19. We are working on it, but as of 9:00 a.m. [6:00 a.m. GMT] Friday this did not happen. Will we pay the debt during the day? Everything is possible," Anatoliy Vorobiev said.

© Sputnik / Vladimir Pesnya
Capello Calls for Unity in Difficult Time for Russian Football
In September, FUR admitted it had owed Capello 7 million pounds ($11 million) but, according to President Nikolay Tolstykh, the organization had no money to pay the debt.

In November, Rostrud conducted an inspection and ordered FUR to pay Capello by December 19.

Commenting on the wage delay earlier this month, Capello told RIA Novosti he would keep training the Russian football team even if he was not paid, because he considered himself "an ambassador tasked with organizing the World Cup [in 2018 in Russia]."

Fabio Capello took over the Russian national team in July 2012 on a two-year contract, helping the team qualify to the 2014 World Cup in Brazil for the first time after a 12-year break. His contract was extended to four more years in January.