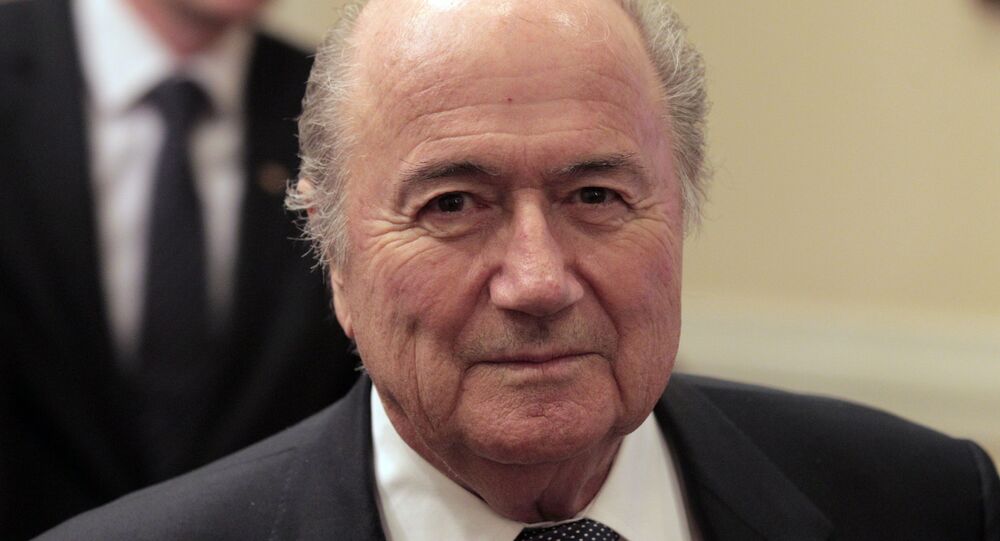 Russia is seriously ahead in preparations for the World Cup 2018 in comparison to Brazil, the president of the International Federation of Association Football (FIFA) said Tuesday, adding that there should be no "boycot" of the event.

MOSCOW, October 28 (RIA Novosti) – Russia is seriously ahead in preparations for the World Cup 2018 in comparison to Brazil, the President of the International Federation of Association Football (FIFA) Joseph "Sepp" Blatter said Tuesday.

"Concerning the report I have received <…> we are far in advance [compared to Brazil]," Blatter told journalists when asked to compare the level of readiness of the Russian infrastructure to host the World Cup 2018 to the Brazil's level of preparation to the tournament four years before the event.

He added that he also liked Russia's emblem for the match, saying that it shows the heart and soul of Russia.

In October, a FIFA inspection commission visited Russia to check the construction sites for the venues in the run-up to the 2018 FIFA World Cup. Christian Unger, who headed the delegation, praised Russia's commitment, saying inspectors were very impressed by the "level of organization".

The World Cup 2014 was held in 12 Brazilian cities, including Fortaleza, Rio de Janeiro and Sao Paulo from June 12 until July 13. Tensions have been running high ahead of the World Cup, with hundreds of demonstrators in Brazil protesting against the cost of staging the tournament. Several stars of Brazil's football team have voiced sympathy for the protesters, with Neymar, Hulk and Fred all criticizing Dilma Rousseff's government.

The 2018 men's football tournament will be held in eleven Russian cities, including Moscow, St. Petersburg and Sochi. Thirty-two national teams are set to take part in the event.

The FIFA president continued that Russia is currently in the limelight of international media and emphasized that football may not only unite the country, but also show the entire world that football is stronger than any protest movement, hinting at Western powers' proposals to boycott the competition.

"Boycott has never had a positive effect. We've received letters from Europe and North America … We have answered very politely and carefully by saying 'OK, we are in football, we are not in politics,'" Blatter concluded.

Russia, Ukraine to Be Separated into Different Groups in World Cup

The teams of Russia and Ukraine will be separated into different groups during the World Cup 2018 tournament, International Federation of Association Football (FIFA) President Joseph “Sepp” Blatter said Tuesday.

“You may be sure,” Blatter said, when responding to a RIA Novosti question, whether Russia and Ukraine will be separated into two different groups.

FIFA usually separates countries into different groups during qualifiers and finals in world cups if political relations between the countries are tense. Russia and Georgia, Armenia and Azerbaijan are usually placed in separate groups.

“We have already avoided the problem of Azerbaijan and Armenia in the last World Cup… You have to avoid the problems,” Blatter explained.

World Cup 2018 will not only unite people inside Russia, but also show that football is stronger than any protest movement, International Federation of Association Football (FIFA) President Joseph “Sepp” Blatter told journalists on Tuesday.

Banning spectators from attending football games is not the correct penalty for fans' bad behavior, FIFA President Joseph "Sepp" Blatter said at a Tuesday press conference in the Russian capital.

"I am against playing matches without spectators. I think this is not the correct punishment for bad behavior… If you have to punish <…> you have to punish the club, not the fans," Blatter told reporters, but stressed that FIFA rulings do not depend on the personal opinion of its president.

"And how do you punish the club? Not with money; you have to punish with points… Deduct points, and then it will stop," the FIFA president argued.

He added that barring teams from taking part in competitions could also be a punitive measure.

The 2018 FIFA World Cup will be held in 11 Russian cities, including Moscow, St. Petersburg and Sochi. Thirty-two national teams are set to take part in the tournament.

No Need for Changes to Football Rules

There is no need to make any changes to the rules for playing football, the president of the International Federation of Association Football (FIFA) said Tuesday.

"What makes our game so popular is the unity of application of the laws of the game. They exist since 1886. It's very easy. So, we shall not interfere too much in the laws of the game <…> but we have to adapt ourselves, especially in professional football," Blatter said at a press conference in Moscow.

"We have to be flexible when it comes to some technicalities," Blatter added.

"We had a committee or a group of experts — they did it and, in my opinion it was wrong because they said they would only take players from the final, but I would have given myself Neuer," Blatter said at a press conference commenting on FIFA's decision to award Lionel Messi with the best player title this year.

On Tuesday, FIFA published its World Player of the Year (Ballon d'Or) shortlist for 2014, in which six Bayern footballers, including Neuer, were included.

The full list of candidates for male World Player of the Year, containing 23 names in total, was drawn up by the FIFA Football Committee and experts from France Football. Apart from candidates for the best player award, FIFA revealed a list of nominees for the men's football World Coach of the Year.

The winners in each category are expected to be announced on January 12, 2015, at an awards ceremony held in the Zurich Kongresshaus, according to FIFA.